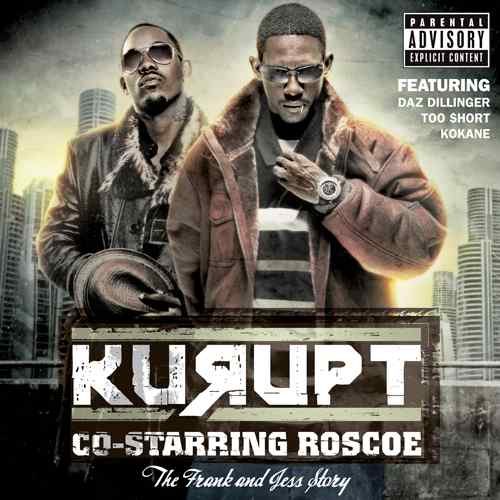 Kurupt and Roscoe :: The Frank and Jess Story

Kurupt’s extensive track record has spanned across more than a decade with his early years dedicated to Death Row and later with the extended family of Dogg Pound Gangstaz (DPG.) With his recent intermittent releases that have been more like mix tapes if anything, Kurupt tries to make a comeback with his kid brother, Roscoe on “The Frank and Jess Story.”

The popularized duo of the James’ brothers has been glorified for decades as their story has been retold over and over again. Their rather infamous namesake and eccentric lifestyle as American bandits in the 1800s has proven to act as a model for the modern day gangster and thug. It’s the perfect example of kinship between siblings which is why it isn’t surprising that they are modeled after so frequently. With this in mind, Kurupt and Roscoe parallel their own lives with the James’ brothers through their album, “The Frank and Jess Story,” as the title alone attempts to show their connection as both brothers and gangsters.

The funk inspired “Hate On Me” begins “The Frank and Jess Story” as it shows how everyone tries to bring Kurupt down and is quickly followed by the first released single “Break it Down Like” featuring Too $hort. With Too $hort’s quick guest appearance, I was indeed excited for this track as Oakland’s claim to fame always seems to make a track more interesting or colorful as some might say. Unfortunately, I remain on the fence as the track falls short for $hort, Kurupt, and Roscoe, but redeems itself through its alluring, ethereal beat. The overused strip club/stripper theme seems quite popular for the album and $hort, but how often can one rap about the club without it becoming old? The trifecta on the track go into detail about how “the ladies break it down like, wiggle it all around like” and their escapades in the “champagne room.”

In a similar track, “Lap Dance” is somewhat self-explanatory. Perhaps producer J. Silva was inclined to think that adding an acoustic guitar to a song about lap dances would change the mood of the track to a more sensual one, but in this instance, it didn’t work. It actually made the track sound even more awkward and in an attempt to stay within context if anything, they should have stuck with a booty club beat. Not to say that this would have made the track a little better, but at least it would have made sense. With heavy synths throughout “I Like Dem Girls,” Kurupt and Roscoe continue to rant and rave about the females in their lives. Kurupt goes into detail about the many women he has been with and what they had to offer and interestingly enough includes Gail Gotti, Kurupt’s wife, on the track.

Kurupt shows what the world’s been missing and what he has to offer now that he is back on the “Game’s Been Missin'” with its simple electric guitar beat while “Bustin'” utilizes heavy strings and instrumental sounds to exemplify J. Silva’s producing talents of being able to release hard hitting anthems. On the flip side, Silva slows it down and samples an Isley Brothers’ classic “Make Me Say it Again” on “All I Need.” The more poignant track points out the importance of friends and family as Kurupt says:

In yet another track that reinforces Kurupt’s ongoing skills in the rap game, “I Got U” shows sentiment for their lasting brotherhood as well as providing a glimpse into Kurupt’s personal struggle. With its simple piano and bass beat, Kurupt and Roscoe demonstrate their level of maturity and ability to rise above and beyond the elementary subject matter found throughout “The Frank and Jess Story” as Kurupt shows:

“The streets don’t affect me like they used to
Concrete, I try to stay solid as stone
All I really want is a couple million or better
I’d a make a couple of mistakes that I wish I didn’t
It’s a couple people that’s dead that I’m wishing was living
It’s some clouds over my head that effects the existence…
I been engaged twice and now it’s the third
I watched, but never really flipped me the bird
I shot, but never really chipped nobody
In ’95 Pac said your name is Young Gotti”

Amidst the repetitive themes and oversimplified beat, “The Frank and Jess Story” Kurupt and Roscoe rise up the occasion on certain tracks, showing that they still have plenty of skills and more importantly are able to work together to make proper music. If you’re looking for the old school, classic Kurupt sounds, this isn’t the album that will do it for you, but on the same token, it is nice to hear a change. The team of Kurupt, Roscoe, and J. Silva attempted something new, but perhaps the innovation fell short this time around and although this ten track LP has since then been released as an expanded full length fifteen track album, I can’t see it changing too much in the end. All in all, it’s not a DPG classic, but the skills that are present and the guest appearances made still make it worthwhile.