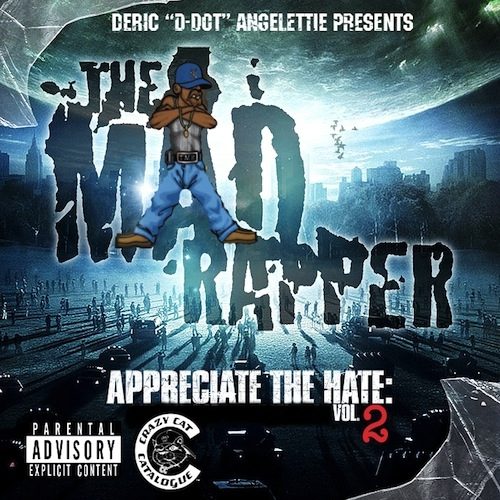 A few weeks ago someone stepped to me with the question “Hey Flash, whatever happened to The Madd Rapper?” I had to stop and think about that one. The obvious answer to give would have been that he never went anywhere since Deric ‘D-Dot’ Angelettie is still heavy in the game, producing R&B and hip-hop hits every year, appearing in liner notes for albums and working behind the scenes on TV shows. Without question Angelettie continues to cash large checks and get wreck whether or not he’s seen in the public eye.

That’s not the question I was asked though – I was asked what happened to The Madd Rapper, D-Dot’s alter ego on the microphone. Most of us remember his classic appearances on Bad Boy albums in the 1990’s, where he constantly complained about not “being recognized” while he hated on famous rappers who got the life he felt he deserved. While D-Dot and Puff Daddy may have envisioned the skits as a humorous response to their critics, the persona of The Madd Rapper took on a life of its own that eventually led to a major label album called “Tell ‘Em Why U Madd.” Despite largely flopping the album is now a footnote in hip-hop history that comes up in rap trivia games due to the fact 50 Cent’s “How to Rob” appears on the album. The song had been floating around as a funny single introducing 50 to the hip-hop world before his “Power of the Dollar” album in 2000, but when he got shot Columbia Records decided he was TOO HOT and promptly dropped the rapper, shelving a full-length release. Since Madd Rapper did the hook of 50’s song and “Tell ‘Em Why U Madd” was released by Columbia, “How to Rob” was recycled and recredited to M.R.

For the person asking me the question, “The Madd Rapper” hadn’t been seen on the scene since 2000 and the popularity of “How to Rob,” even though the real-life man behind the name never went anywhere. As it turns out though the question was well-timed since I had just received a digital copy of a brand new album by The Mad Rapper. At first I suspected this wasn’t the same gimmick given the name was spelled with only one D, and that mixtape host Statik Selektah had passed the torch to a brand new hip-hop hater. The opening skit resolved any doubts I had though as the familiar raspy voice botched multiple attempts to open the CD, calling the host Frantic Inspector, Inspector Gadget and Statik Cling. This had me rolling. A short interlude follows with audio snippets of various hip-hop artists dropping Mad Rapper’s name as a punchline. The first full song (if a track only 1:44 long can be called such) is “Carried Away”:

“I’m hearin all the chit-chatter, then collectin my data
Information I gather, man it’s makin me sadder
How the hell they gon’ complain when they pockets is fatter?
Man I thought I was mad but these rappers is madder
Got no type of swagger, straight puss on a platter
Your heart is beatin fast I hear the pitter the patter
Get cold knocked the {fuck} out with a shot to your bladder
And when I pull out the hammer, you the first one to scatter”

A perhaps timely rap given the amount of financial crisis these days, noting you can’t really be aMAD rapper if you’re not really broke. Of course the gimmick of The Mad Rapper has long since been exposed, and Statik Selektah breaks kayfabe even further in the song’s intro by saying “Yo D-Dot, you ready?” Since D-Dot is not broke either so you just have to take it at face value he’s mad that he helped 50 and Kanye “climb up the ladder” yet didn’t get a share of the wealth, otherwise he’s hating on himself. There’s also the issue of the rap style itself, which works for a comical presentation but is otherwise too simplistic to be stylistic. Hip-hop historians (a.k.a. rap nerds) will remember the seminal Two Kings in a Cipher album “From Pyramids to Projects” where D-Dot (known then as D.O.P.) had very progessive, afrocentric and intelligent rhymes, but to be perfectly fair rapping like that would destroy what little kayfabe The Mad Rapper has left.

“Appreciate the Hate” is a typical mixtape in that it features short freestyles over widely available instrumentals, a few totally original songs, and a whole lot of guest rappers getting into the mix. The guests are very necessary in this case, since the raspy-voiced Mad Rapper can be funny for a few minutes before the style starts to grate on your ears. Cory Gunz and Mad Rapper share equal billing and mic time on “And Then Some,” one of the mixtape’s best tracks. If Gunz had another minute to shine it would have been even better. Up-and-coming Brooklyn rapperWais P makes several memorable appearances throughout, including “They Comin'” and the posse all in track “Brooklyn Let’s Go” also featuring Red Cafe, Maino and Joell Ortiz. Some songs I “appreciate” just for the beats, such as Mad Rapper and Ceion’s “Get Off Me” being set to Slim Thug’s “Like a Boss.” The skits also tend to be funnier or more interesting than is typical for a mixtape, which is a huge plus.

Speaking of “whatever happened to” I’m pleased to see DV Alias Khryst is still around too, singing on the hook of “The Corner (Crazy Cat Remix).” Coincidentally this is one of Mad Rapper’s best SERIOUS raps on the album, an actual narrative of hustling just to stay one step ahead of hunger and poverty. In the end that’s what’s so enjoyable and simultaneously so frustrating about “Appreciate the Hate.” D-Dot has legit rhyme writing and rap spitting credentials dating back to the early 1990’s, but the skills have gotten as rusty as his voice has raspy while he’s been producing and making hits for everybody else. While this mixtape is enjoyable for the beats, the comedic presentation and the fairly well chosen selection of guests, I have to wonder if I’d feel the same way paying $15 for it instead of getting it for free. Still just for the nostalgia value I’m glad that D-Dot dusted the mothballs off The Mad Rapper gimmick, even if he did drop a D in the process.