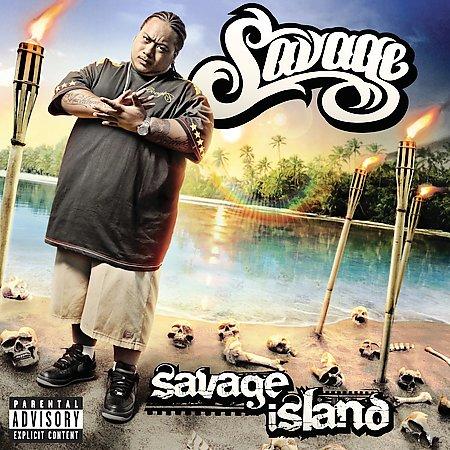 The inclusion of Savage’s “Swing” in the hit film “Knocked Up” during the hilarious roll-the-dice dance scene was a wise move by the label in gaining some recognition for the featured artist in the States. Savage had previously made his name as a member of the New Zealand collective The Decepticonz, whom built a solid fan base there. Following that, Savage started making noise as a solo artist with the debut release entitled “Moonshine,” which is where “Swing” and the title track that also appears on this LP originated from. Now it is time for the Samoan rapper with a booming voice to get some major distribution.

Savage unveils his larger than life persona from the beginning with “Knock a Hater Out” featuring Ganxstaridd (of Boo Yaa Tribe) which is driven by the trumpets of a wildly dramatic beat similar to Bone Crusher’s “Never Scared.” The testosterone-pumping anthem sounds constructed to bang in your whip. Savage sticks to fairly simplistic verses that he flows in an aggressive, almost yelling, manner.

The listener soon realizes that this is just Savage’s style. Most all of “Savage Island” has the synthesized production popularized by southern rap. Similarly, your mind will not be challenged by the lyrical content but your head may nod and you might get the urge to dance in the club. Hopefully you have better moves than Seth Rogan’s dice move, because, sadly, I know that I donâ€˜t.

“So Clean,” “Swing,” “Wild Out (ChoooHooo),” “Bottles From the Bar,” “Rock and Sway,” “Shorty Make It Work,” and the bonus “Swing (Remix)” are pretty much interchangeable, if you pardon the lack of objectivity in this editorial. The remix to “Swing” is actually slightly better than the original due to a stronger verse from Pitbull, as compared to Souljah Boy Tell’Em. He attempts to delve deeper with “Family Tribute,” which plays out like an autobiography; however, it ultimately ends up sounding like more of the same. This isn’t necessarily a bad thing, given that Savage has gathered some nice production for this album and the songs serve their purpose.

The aforementioned “Moonshine” takes top honors on the CD, though. It kicks off with the crooning of hit-maker Akon and light acoustic strumming before adding in some depth with riveting horns. Still, Savage’s weaknesses “shine” through with these bars:

“How many times I gotta tell you?
What you stressing me for?
Yea, I see you need attention
I ain’t trying to ignore
I got it straight enough now
I got work to do
You want me to drop everything
So it surrounds you
Man, I love you so much
It makes me stick to my stomach
And I love it how I can vomit
And you think nothing of it
I never meant to argue with you
Please forgive
Hell, I need you in my life and the reason is…”

In the context of the song it all makes a little more sense, especially after taking in the concluding verse. The track is a loving ode particularly directed towards the purest form of alcoholic drink. However, it would be a stretch for anyone to suggest that there is any semblance of brilliance in these words.

Aside from the cover art and the sunny song “I Love the Islands,” one might not even realize that Savage hails from New Zealand. There is no real hitch in his flow, though that might be partially a result of the fact that it is not particularly fast-paced. Besides that, all of the guest spots fit in with the possible inaccurate presumption that he hails from south of the Mason Dixon. Such guests include; Sean P (of Youngbloodz), Da Backwudz, Baby Bash, Pitbull, Souljah Boy and many more. Furthermore, “Shorty Make It Work” produced by DJ Montana is a prime example of Atlanta snap music.

There are certainly a few choice cuts on “Savage Island” and it proves to be a respectable introduction to an artist from overseas. Savage has been marketed in all of the right ways, thanks mainly to the ring tone friendly cut, “Swing.” But if you are looking for something beyond club music then there is not much here to pay attention to. Hopefully, Savage maintains the production value on this album and spices up his follow-up with better balance.