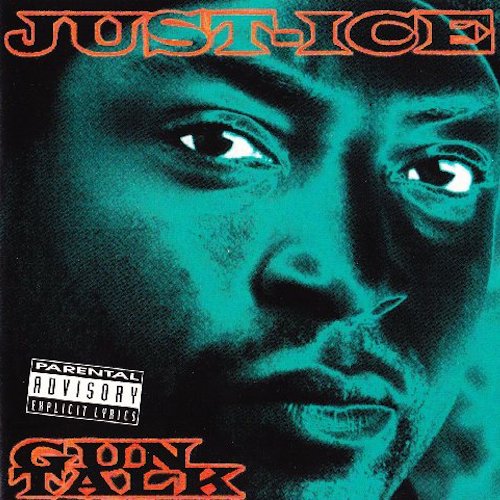 I honestly didn’t think I remembered a single thing about 1993’s “Gun Talk” from Just-Ice until I heard “Guns N Girls.” Suddenly it all came flooding back — oh yes — I remember playing this twelve inch single in college. It has the exact same “Tramp” sample as “How I Could Kill a Man” by Cypress Hill and dozens of other songs, which made it very easy to blend and mix from one track to another. I was a terrible, lousy, no good deejay but even a pale caucasoid could pull off mixing “Gun Talk” into a live session with ease. “Bam bam! My sound number one! Bam bam! Come kiss the Magnum.”

As I’ve previously stated about Just-Ice though, he’s not an incredibly versatile rapper. This was the fifth out of seven full length studio albums that Joseph Williams Jr. released, and it might be as close as he got to being a good emcee. The Kurtis Mantronik production for the first half of the album helps him release his full potential on tracks like “It’s a Just-Ice Thing.” His gruff hard voice is perfectly suited for the minimalistic sound and hard hitting drums. “They really thought, that I was just a stupid kid/and make the same mistakes that somebody else did (right?)/But I didn’t — I can’t, I’m too intelligent/I got it right, all that other shit’s irrelevant.” WORD.

Unfortunately the second half of the album falters by bringing in an unknown named O.C. Rodriguez, who fails to inspire Just-Ice or the listener. I enjoy “fried chicken” samples as Ice-T once described, but Rodriguez took it too far on “That’s the Way I Feel” with a song where the constant needle pop ruins the mood. The best part of the track is when the instrumental drops out and Just-Ice flows acapella, but that’s only for 10 seconds or so.

There’s also something really strange about a rapper described by others (and by himself) as “the original gangster” of rap trying to kick knowledge on cuts like “Informer Fi Dead.” “Now jump up, get up, pump up, cause I’m fed up/direct respect correct yeah instead of/brag time rappers, and dirty smelling scratchers.” I don’t mind it but it also feels out of place for a man who just as often says “who gives a fuck” and threatens to pull his tool. In fact before the song is even over he switches to a patois flow and starts threatening to “lick a shot” in all directions. That’s much more his style.

It really feels like this is two entirely different albums mashed together. With the Mantronix production he spits a “Freestyle” where he almost sounds like a long lost cousin of Big Daddy Kane. With Rodriguez on board he’s quite literally “On the Loose,” untethered by the normal constraints of his style and veering into realms of new jack swing rap. The only thing that reminds you of who you’re listening to is when he says “AK, AR or designed 9/start to duck while I start to bust/yo look for some cover while I start to reload.” Now that’s definitely some “Gun Talk.”

On the whole I like this album more than “Kool & Deadly” because Just-Ice is a more developed lyricist here, but no one song has the historical value of “Moshitup” or “Going Way Back,” so it can be argued that it’s not a fair trade. It would be accurate to say it was too little too late for Just-Ice to reach his peak as a lyricist by this point though, because this is the only LP in his entire catalogue to get a major label release. The rap world had already begun its shift to the West coast, and his “Gun Talk” sounded quaint compared to the gangster rap that caused fellow New York rappers like Tim Dog to lash out at California for taking over. If the whole album had been done by Mantronix it might have been legendary, but instead it’s just “good.” Oh well.