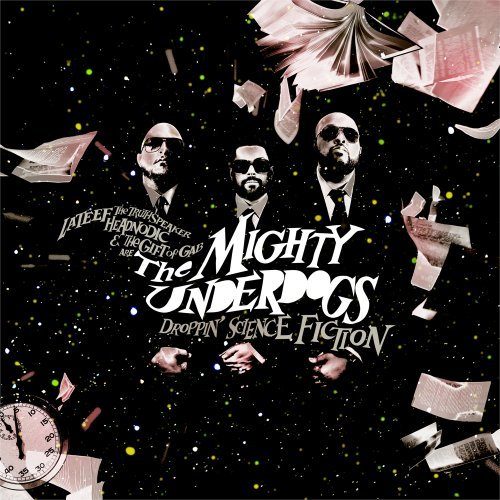 As 2008 draws to an end, I probably wouldn’t be completely out of line if I called it the year of the underdog. Nevertheless, to label anybody an underdog isn’t the most flattering compliment, just as the term upset win suggests that things didn’t go as they normally would have. Yet the 2008 presidential race also showed that the roles can reverse quickly. Today’s long shot could be easily tomorrow’s front-runner, and vice versa. Rap music too has its share of top dogs and underdogs, with the difference that in rap even an undisputed top dog will consider himself an underdog in the big scheme of things. As 50 Cent once said in support of The Game: “Hate it or love it, the underdog’s on top.”

The slogan Yes we can may have been chosen to alert supporters that they weren’t expected that they actually could and therefore had to make an extra effort, but Obama’s lack of a victim complex contributed considerably to the confidence that proved so attractive to voters. Maybe we can take that as an indication that playing the underdog card is a dated strategy. To come back to rap music, The Mighty Underdogs fit in somewhere in between, to the point where they risk being neither Mighty nor Underdogs, but just plain average folk – a definition they might just agree to. The Mighty Underdogs aren’t by any means new to the scene. Comprised of vocalists The Gift of Gab (Blackalicious) and Lateef the Truth Speaker (Latyrx) and producer Headnodic (Crown City Rockers), the trio boasts substantial industry experience. Gab and Lateef go back to the SoleSides days and have collaborated plenty of times, but this is the first time they team up over album length, four years after Lateef borrowed Gab’s other half Chief Xcel for the Maroons project.

“Droppin’ Science Fiction” was announced earlier this year with “The Prelude EP,” and found a fitting home on New York’s Definitive Jux, a record company we likened to the Bay Area’s Quannum Projects (the rappers’ regular label) on the occasion of Gab’s solo “4th Dimensional Rocketships Going Up.” That is to say that The Mighty Underdogs is more a family affair than one of the numerous surprise collaboration projects that hit hip-hop in the last years. The only variable is Headnodic, who has already appeared on the RapReviews radar, but who is simply not as known as his collaborators.

“Droppin’ Science Fiction” should raise his profile considerably. To say that he emerges as the star of the show would belittle the emcees’ role, but the album owes much to its success to its musical conductor. Whatever song concept the trio divises, Headnodic flawlessly puts it to work. The booklet lists detailed instrumentation for each track, revealing a wealth of instruments and equipment used. These are not your average one-man beats, they’re enriched by guest musicians and the bassist’s background as a band member of Mission: and Crown City Rockers. The opening (and criminally short) “Monster” is as spooky as it is fun, hitting just about the right note for the offspring that introduces The Mighty Underdogs at the beginning. Gab matches the track’s carneval vibe with Halloween-ready rhymes: “Now all you groovy ghoulies do the Monster Mash / and light your candle sticks and wave ’em all from front to back / the return of the living dead is ’bout to haunt the track…”

What follows is a rollercoaster ride that neither neglects the element of surprise nor the familiar sights and sounds. The velvety (and again inexplicably short) “Hands in the Air” rests safely in the group’s Left Coast comfort zone, with both rappers taking digs at the current scene, Lateef promising, “Anyone remember when music still was relevant? / Then you’ll love what we present,” and Gab complaining, “Hip-Hop fiend jones, wonderin’ where the hell it went / pop rap was a no-no, now hella records just sound repetitive.”

“So Sad,” featuring two Marley family members, is a bluesy examination of the world’s ills where “even stories of success” turn out “somewhat bitter.” The more conciliating “Folks,” whose smooth groove inspires the rappers not just to sing along, but also to bring the kids along, features an honest Gab verse about connecting with his neglected spiritual side. The Perceptionists-featuring “Escape” finds four prominent underground rappers waxing vaguely about industry pressure over a very harmonious bassline/piano combo. “Want You Back,” a delicate concoction of cautiously shuffling drums, melodic Moog touches and J Sun and Joyo Velarde vocals, transcends the initial love theme set up by Lateef when Gab regrets being away from home:

“Time drifts so fast, old days are past, I wish I could go back
I feel so detatched sometimes, like I’m out lookin’ in
Like I forgot about Tim and got lost in The Gift of Gab
Cause when you grow and come back, everybody else grew
You expect it to be the same, but everything is new”

What we’d be deprived of if there wasn’t no Gift of Gab can be witnessed impressively on “War Walk,” where his choppy whisper delivery upstages everybody from Chali 2na to Tash. Even more exceptional is his part on the previously released “Gunfight.” After guest MF DOOM’s stream-of-consciousness mumblings Gab’s – lyrically AND vocally – cinematic performance might just be the best Western-inspired moment since Kool Moe Dee’s classic “Wild Wild West.” Lateef holds his own with vintage gun talk: “I’ll paint the bull’s eye, just show me the target / If there’s a vest that can stop this, it ain’t been invented yet / If I gotcha in my sight it’s a fair bet / the back of your shirt’s probably wet, and it ain’t just sweat / It’s a gunfight.” Not to mention, the track has definite crossover potential and with a big budget video might have been able to protrude into “Clint Eastwood” (Gorillaz) realms.

As far as features go, the incomparable Lyrics Born makes the expected appearance on the entertaining “ILL Vacation,” a breathless one-upmanship of adventurous trips over a lounge-lizardish easy listening background. The duo manages to make fun of competition on “Laughing at You” (which consists of little more than a famous Biz Markie beatboxing part), but gets outdone by Casual, who quips, “They rhymin’ ’bout they spokes, tellin’ me about they felonies / but folks, you Got Jokes like Bill Bellamy / (…) / You funny dudes better know your part / cause I ain’t never been casted for no Bozo part.”

The closing “Victorious” possesses a Dillaesque pop shine, while the catchphrase- and percussion-heavy “Aye” could be seen as their attempt to catch up with The Cool Kids, only that the songwriting is more N.W.A than A Tribe Called Quest, Gab wrecking Lateef’s blossoming love with damning evidence. “UFC Remix” casts a dazzling spotlight on Quannum’s DJ Shadow, who cuts up the Clipse to great effect, but Headnodic shows himself just as versed in the ways of old with a slamming beat. Sadly, “Science Fiction” is the only track that makes good on the early promise “We not keepin’ it real cause we droppin’ science fiction.” It would have been a one-dimensional rocketship going up, but an album full of spaced out soundscapes, drifting Joyo Velarde vocs, Star Trek references and a revival of space age emceeing (remember Super Rhyme, MC Space, “Planet E” and “Follow the Leader”?) by The Mighty Underdogs might have just worked.

If every dog has his day, there’s a good chance for The Mighty Underdogs, either collectively or individually, to reach top dog status at least once during their career(s). With “Droppin’ Science Fiction” they lay another solid stepping stone, presenting an impressive cornucopia of THAT OTHER RAP the general public is usually unaware of. This is a fun, modern rap album with strong roots in ’90s creativity and ’80s innocence that has the potential to reach longtime fans as well as recruit new followers.