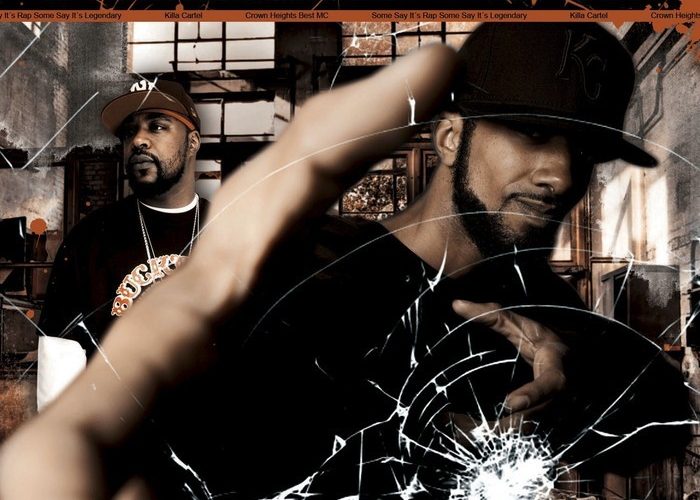 It’s hard for me to be a BIGGER fan of Duck Down and BCC, but their impressive track record for putting on talented new acts continues to raise my level of respect for the crew. From the contributions, old and new, of original members like Buckshot and Smif-N-Wessun to newer offerings from the likes of Kidz in the Hall and everything in between, the quality control is amazing as they rarely put out wack shit of any kind.

Ruste Juxx keeps the string of successes alive with his debut offering, “Indestructible,” co-signed by none other than Sean Price. You may know him from appearances on Ruck’s last two LPs, but consider that merely a passing introduction to an artist with plenty more to say, as made clear by the surprisingly well-crafted album he delivers right out the gate.

Despite this being his first official full-length, Ruste doesn’t sound like a rookie, which is probably because he hardly is. He’s been in and around the scene since the late â€˜90s, showing up on Heltah Skeltah’s “Magnum Force” and other Boot Camp tracks over the years. Consequently, he’s had plenty of time to craft his first album, and it shows in the depth of material he presents. While he has a natural flow and effective voice â€“ akin to Joe Budden and Lloyd Banks in its raspy-yet-smooth quality â€“ his most impressive quality is his ability to deal with a variety of subjects without sounding like he’s overextending himself. He has plenty of your standard fare BCC tracks, full of shit-talking and gun-toting bravado, but he also throws in a touching tribute and pledge of commitment to his wife (“Love Is Worth Waiting For”) and gives his own take on the Keep Ya Head Up theme (“Optimistic”). His unique take on matters even saves a number of generic topics from complete failure, as he does on the requisite weed ode “Machine Gun Skunk” featuring Jahdan and the ladies’ jam “Let Me In.”

Don’t get it twisted, though. This isn’t just some underground rap album heavy on lyrics and light on beats. Ruste Juxx’s years spent toiling in the background have paid off in the impressive list of producers he got to provide beats to this project. Black Milk absolutely laces the opener “Wipe Off Ya Smile” with ominous keys and trademark bass thump. The vibe of this one is BCC all the way, and Ruste’s half-sung chorus is vaguely reminiscent of Prodigy in its cadence and nonchalance with dark subject matter. Predictably, Black Milk’s second contribution is another of the album’s best, as “Duck Down!” stomps all over your ear with triumphant horns and some more in-your-face drums. PF Cuttin dishes out a couple of bangers himself, going all Just Blaze on the funked out “Get Up,” which succeeds despite a mood-killing hook by the young Lil Vic.

This is one of the only times a song’s vibe ever slips up on “Indestructible.” There is no intro track and no skits to speak of, and the only interlude is a brief a cappella freestyle by his recently deceased sister Blaze, which is entirely appropriate as the lead-in to his eulogy for his former partner on the mic. It’s another touching moment in the album’s home stretch, helping it close powerfully with the kind of emotional material that even more seasoned MCs struggle with. It’s a testament to the value of accumulated experience that he is able to pull it all off on his very first album. Maybe other artists should follow his example…

Although there is little in the way of true stand-out material, there is also very little to complain about if you take the album for what it is. The double-time of “Morgue Truck” misses the mark and “Pimpin Ya Wife” is skippable despite the fact that he’s talking about actually pimping rather than just being a player (bonus points in my book), but otherwise everything is worthy of repeated listens. The beats are all winners, the MC has swag and lyrics to spare, and the concepts are well above average. If this is just album number one, I expect plenty more and better from Ruste Juxx in the years to come.