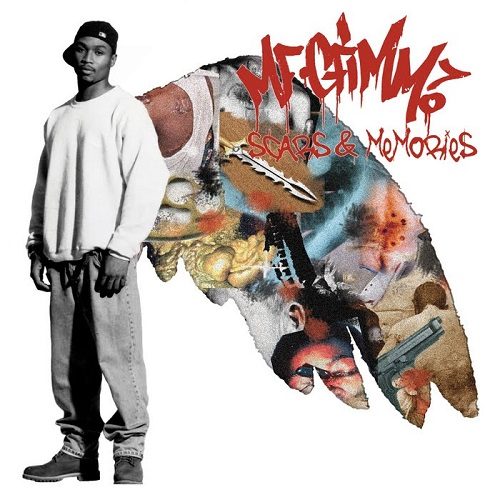 Perusing MF Grimm’s material from this decade, it’s obvious that, although he’s sometimes not a very talented rapper, he does, at the very least, have some interesting, if eccentric, ideas. For example, in one album, he (supposedly) assumes the persona of Jet Jaguar, an old Godzilla character. On “The Hunt for the Gingerbread Man,” he becomes a… ‘quaint’ interpretation of the titular character, rhyming through an ill-made, violent, and intellectually drippy cartoon world. And, there’s even “American Hunger,” a pretty well-produced triple-disc album, dealing with the concept on a rather epic (read: bloated) scale.

In all of this, it’s hard to remember what MF Grimm once was: a good gangster rapper with a good flow, and a real-life violent streak. Although he had no real ideas then, he was, at least technically, a better rapper. That’s (or was) his life, complete with the personal choices he regrets. On “Scars & Memories,” this history is at the front, a nostalgic collection of songs from 1990 to 2004, the earlier tracks being especially good. The cover features Grimm without a wheelchair (which means the photo was taken before the 1994 shooting that nearly killed him), a poignant twist that makes the context immediate.

The album begins with an interview in which Grimm explains his new “GM” (“grandmaster”) title. Interviews here are not some idiotic filler, but part of the artistic whole – they are short, and merely contribute to the nostalgic elements of the album. It’s an important point to remember, especially since Grimm crafts ‘wholes’ as opposed to individual tracks. Sure, the results, as I’ve stated, are not always good, but at least Grimm is aware of these artistic techniques.

Next is “Take ‘Em To War,” an aggressive violin-built piece, thrown against a rough piano. Some of the ‘roughness’ comes from inconsistent audio (the originals for many tracks were stolen), which makes part of the result inadvertent, but there’s a definite, violent pace that matches Grimm’s performance:

“As far as I’m concerned, I died a long time ago
Enter the mind of the reaper if you dare
man, woman, child – but bring a lot of clothes
since you’ve got to stay a while
Rappers coming close are left dead in piles
or floored like tiles, I beat down clowns
I wipe off smiles, I killed a man
for every inch you can count in a mile”

Lyrically, it’s never great, nor profound, but, as a performer, Grimm obviously used to be much more intense, offering an excellent, surprisingly quick flow – ‘surprising,’ since listeners familiar only with his recent material expect blandness and monotony.

“King of New York,” another piano track, visits the same territory. As before, it is good on a purely technical level, and, as before, without substance. “Get Down” is a typical, subdued mid-90s party track, along the lines of Big L’s “M.V.P.,” but is less impressive, and forgettable. After this, another interview comes up, with Grimm declaring he took his early career opportunities “for granted” – again, a strategic move, considering the intensity (and violence!) of the next track, “So Watchu Want.” It’s classic braggadocio, and has Grimm at his wittiest – in brief, it’s one of the best things here. Again, the following interview, on getting shot, tempers some of the excess of the previous track. These juxtapositions work well.

“Bloody Love Letter” is musically dull – a drowned-out, poorly arranged bass, against some monotonous drums – and full of clichÃ©s, but also has some good lines. Conceptually, Grimm has been shot, is dying, and sends a letter to a girlfriend. As with any concept, it’s potentially great, but here, not so much. The title track is another nostalgic piece, with an extremely subtle but important electric guitar, with some slightly rough drums against ‘organic’ sounds and bass. It’s mature, and unlike the above, only occasionally banal. Judging by the crisp audio of “The Original,” it sounds like something a bit later, but features rapping as good as, if not better, than on “So Watchu Want”:

“There’s only one Grim Reaper – yes, there’s only one
niggas try to steal my name and fame, but they are my sons
I slap-box with spirits, knuckle up with omens
try to bite my flow, and
your mouth be foaming”

“Wack Emcees” is good for the same reasons, with Monsta Island Czars offering even better performances than Grimm, whose contribution is still good. “Do It for the Kids” sounds like a slightly twisted nursery rhyme, with weirdly subdued production given the dark, violent content, especially in the first verse. “Dedicated” is probably the best conceptual track of Grimm’s career, with subdued drum production on the verses, complex, electronic-based orchestration on the chorus, and memorable, even great, lines. In fact, the clichÃ©s are absent – a rarity in hip-hop, and especially in Grimm’s conceptual material. It’s the best track on the album.

In the end, “Scars & Memories” is extremely consistent, with only a few weaker tracks among very good ones. The good tracks, though, have no depth – it’s bragging, it’s gun-talk, but at least it’s talented. That aside, “Dedicated” is, as noted, conceptually good and well-executed – perhaps Grimm, if he wants to, can still accomplish similar things, although I rarely see it in his new stuff. The best performances (and lyrics) of Grimm’s career, then, are all here, although his production, especially when he took it into his own hands later on, is only getting better as he matures.