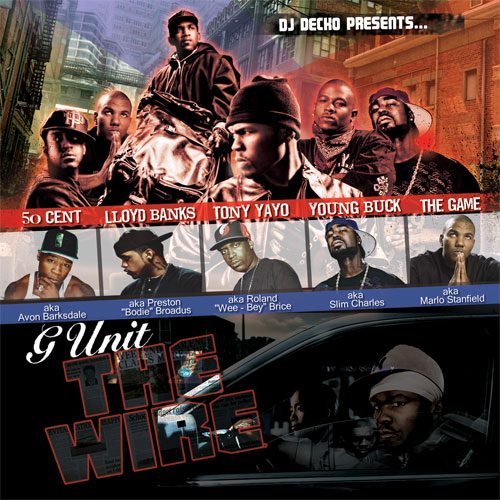 Looking back on 2008 there are many beefs I will remember for many reasons, but one that still stands out in my mind as bizarre is 50 Cent versus Young Buck. In hindsight it seems almost inevitable given Buck hails from Tennessee, was a one time Ca$h Money recruit, and was brought into G-Unit while Tony Yayo was incarcerated. Once Yayo came home and the original Unit was reunited, the atmosphere turned into New York group with a Tennessee rapper who came in off the bench to pinch hit as opposed to a united collective. It’s not surprising Buck would chafe at that environment and desire to run his own Cashville Records, to affiliate with artists from the South and the West, a more natural fit for a rapper who was a New York transplant to begin with. It was all good at first with 50 encouraging Buck to do his thing and create his own brand, but tensions continued to grow over personal and financial issues to the point they were taking potshots at each other in the press. While it’s been suggested the whole thing was a “work” just to generate records sales, there are several problems with this theory.

Clearly neither party benefitted from this fiasco – 50 got no extra publicity, Buck was ousted from G-Unit, and little has changed since then. That’s why this feud will be remembered as bizarre – nobody profited and nobody won. In fact it’s entirely likely that Buck is still signed with 50 as either an artist or as an agent, which probably explains why both sides may still be mad but they’re not talking about it. They’re not going to either. The only evidence of this feud still on the record is the printed and published interviews with each rapper speaking their point of view and mixtapes like “DJ Decko & G-Unit Present – The Wire.” There are multiple allusions in the title. One would be the drama series shown on HBO which realistically portrayed the many levels of the drug trade in an urban city (in this case Baltimore) that effects everyone from cops to teachers to politicians. Another would be the very act of tapping a phone line, recording information for surveillance purposes. Either way the clear intent of this mixtape from the opening “Taped Conversation,” which takes up just over SEVENTEEN MINUTES, was to paint Young Buck as a fool. When you hear Buck sobbing on the phone, there can be no doubt 50 wanted to humiliate him.

The mixtape itself though is equally bizarre. This one was one of many free download mixtapes I got sent throughout ’08, very few of which I actually had time to listen to in full, just because of the sheer quantity that came out. In a bad economy there’s no question giving away a mix is just as good as selling it, because at least you can generate interest in a product people might pay for down the road. I’m not really sure who DJ Decko is promoting though. While this is labeled a G-Unit mixtape and largely features G-Unit’s loyal members in the spotlight, Young Buck’s responses to 50 are ALSO included on this mixtape. As Juvenile said so many years ago, “HA?!” If 50 did endorse this I have to give their cajones credit – they’re so confident in their superiority they’re not afraid of what Buck has to say.

“You a hoe, and I know
The only people record conversations is five-oh, now die slow
Ciara go while you got a chance
Let a real nigga put a band on your hand
Understand I don’t bite the hand that feed me
But I will let that hand say it don’t need me”

I could see putting Buck on their mixtape, especially since he may still be under 50’s thumb and in no position to complain. That’s nothing compared to the fact THE GAME is included on the mixtape, and there’s NO QUESTION WHATSOEVER how 50 and Game feel about each other.

“It’s a G in Young Buck, it’s a G in The Game
Banks Yayo and 50 ain’t no G in they name
I’m a certified gangster, fuck them wankstas
Can’t carry no heat but you can still get shanked up
The beef ain’t a Chevy but it still get cranked up
You don’t care about your son if you did he would get yanked up
Tapin niggaz phone calls, what kind of shit is that?
[…]
I told Buck in oh-five, I could never stay loyal
to a homo snitch nigga that’s weaker than tinfoil”

I’ll probably still be puzzling over this mixtape for the next two years or until somebody involved with making it (possibly DJ Gecko himself) explains why they would give so much voice to the very people who had been drummed out of G-Unit as a group OR as a record label. Young Buck is all over this mixtape though, whether rapping a few bars here and there or being cracked on by Tony Yayo in a phone call with Whoo Kid on Shade 45 radio. “To anybody’s out there, picture somebody owing you two-hundred and fifty thousand and saying FUCK YOU.” Yayo may even have a point about Buck not knowing when to keep his mouth shut but there’s no sensible reason for the Unit to afford him “equal response time” like a political debate all over this mixtape of their whole goal is to shut him up and shut him down. That’s why in the end I suspect DJ Gecko was not doing this mixtape on G-Unit’s behalf, he was doing it on behalf of the BEEF. What Gecko has done here is record for posterity a moment in time where everybody lost their damn minds and was talking shit about each other in public, even though they may have regretted their behavior later. Buck looks like a crybaby, 50 looks like a snitch, nobody comes out of this smelling like a rose – except those of us who got this mixtape for free. The original tracks by Spider Loc and Hot Rod really aren’t anything to write home about but for preserving a moment in time in 2008 that’s already been forgotten by Whackypedia this mixtape gets my respect.