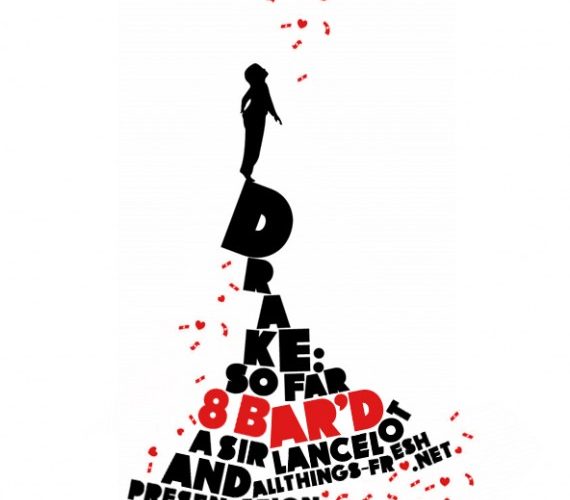 And so begins Drake’s legitimate crossover from rapper to rapper slash singer, a transition that has almost never ended smoothly in hip hop. Kanye West delivered an album of computer-enhanced vocalizing in 2008 that was by far the most polarizing release of the year, among both critics and fans. Drake’s “So Far Gone” treads similar watersâ€”much of the production (especially what’s handled by executive producer 40) seems to be influenced by Kanye’s “pop art” beat making, combining moody background samples with distinct drums that drive Drake’s flows. The first two tracks on the mixtape are admirably bold, not greeting fans of his witty rap verses with a couple sixteens but instead with contemplative singing and relatively restrained verses that straddle the line between rapping and spoken word.

I’ve talked to several fans of Drake’s who listened to the mixtape and it seems to have polarized many, opening up to a wider audience while at the same time alienating some of those who’ve been following him since “Room for Improvement.” A strong number of Kanye’s strongest followers hated “808s & Hearbreak,” but Drake’s listeners will be relieved to hear the that when he does rap (we’ll say a little more than 50% of the mixtape is flat out spitting), it’s as clean as the best of “Comeback Season.” “Ignant Shit” is likely the best example of Drake’s dedication to a complex rhyme scheme and wordplay, and makes a strong case for an authentic collaboration with Just Blaze. Lil Wayne is at his personal best, spitting better than he did on the actual Jay album, (“and you can suck my wings // stand on my money, head butt Yao Ming // put ya hand in the oven if ya touch my things // I’m shuffling the cards, bout to cut my queens”) but not before Drake sets the bar considerably high:

“It’s all good, I’m goin off like lights when the show’s over
Make pasta, rent a movie, call hoes over
Rest in peace to Heath Ledger but I’m no joker
I’ll slow roast ya, got no holsta’
Wet glass on ya table nigga no coaster
Burn bread every day bwoi no toaster
G n Taz got a sig but I’m no smoker
They just hand the chips to me, nigga no poker”

Now this is the kind of rapping a lot of hip hop fans were hoping Drake would lace his entire mixtape with. Ever since he spit his now notorious “blue’s clue” line on “Ransom” and had his “Money to Blow” verse performed by Lil Wayne at the VMAs, the aforementioned “hood niggas”â€”or rather fans of harder hip hopâ€”have started to pay attention to him. This question of identity has remained a blessing and a curse throughout the young rapper’s career, as it’s taken him a long time to be taken as a serious MC since starring as Wheelchair Jimmy in tween soap opera Degrassi. Now that he’s got a demographic that includes female fans of the show and a hip hop fanbase fueled largely by Lil Wayne’s co-signature and a remix of Lykke Li’s sensational “Little Bit,” he seems prepared to transition again into a full-fledged rapper/singer, a rarity in the mainstream.

“So Far Gone” is unquestionably one of the most cohesive, atmospheric hip hop records in recent memoryâ€”which is almost the antithesis of what one expects from a mixtape. Drake is not a gangster rapper and never goes down that path, instead proving how many ways there are to cleverly rap about problematic relationships and being on the verge of stardom. The middle of the tape is generally dedicated to rapping over other beats: from Santogold’s “Unstoppable” to Kanye West’s “Say You Will.” The latter is a Budden-esque three minutes of pure dumbing out, including a particularly clever encapsulation of his career (“transitioning from fitting in to standing out”). Even in these brief departures from 40 and Boy-1da’s production, nothing on the mixtape ever feels out of place. There really isn’t a weak track on the record; the closest thing to a misstep is the remix of Peter, Bjorn & John’s “Let’s Call It Off,” an indie collaboration that’s not quite as convincing as the brilliant Lykke Li remix.

Truthfully, I wish I could dedicate a paragraph to each track, from the awesomely obscure DJ Screw homage of “November 18th” to the blazing organs of “Uptown,” a surprise collaboration between Wayne, Drake and Bun B. I’ll instead finish off with an excerpt of “The Calm,” an excellent microcosm of the mood of the mixtape as a whole. Drake spits two verses here, both rhyming the same syllable the entire time:

“And life is so insane, look what I became, tryna make a name
All my first dates are interrupted by my fame
Because every picture taken is a fan that you can gain
They love it when you smile; unaware that it’s a strain
It’s a curse you gotta live with when you born to entertain
Women need attention therefore women will complain
Develop hatred for men and say that you’re the one to blame
…
Hopin’ West and Union do a currency exchange
‘Cause my dad called and got me feeling guilty and ashamed
Like, how I had a Rolls and I went and got a Range
And he payin for his cigarettes with dollars and some change
Damn, and I can only feel his pain
‘Cause in Memphis, Tennessee there’s only so much to attain
So I’m filling out the form at the counter once again
He say he love me I just hope he doesn’t say that shit in vain…”