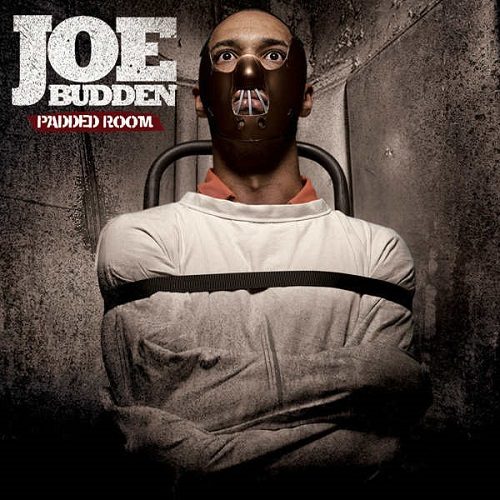 Exactly 54 weeks ago, I wrote the RapReview of Joe Budden’s third installment of the “Mood Muzik” series, declaring it lyrically impressive, acting as the perfect primer for the forthcoming album, “Padded Room.” Of course, hip hop being what it is, his official sophomore album wasn’t released on schedule in October, and it finally gets to see the light of day this week. Unbelievably, it is closing in on SIX years since he surfaced with his debut album, and after parting ways in a somewhat acrimonious break-up with Def Jam, he developed into a completely different animal. A siege mentality intertwined with a lyrical playfulness, and the result was the most unlikely of underground heroes. His second LP could not be further removed from his first. Save for a couple of (slightly) radio-friendly singles, the majority of the album – the second half, in particular – effectively veers into “concept” territory. Life is sweet; he meets a girl; fucks a girl; goes crazy; faces God. Mix in some new beef, some new friends and, ironically, his patented “nobody likes me” attitude, and you start to get the idea. It is phenomenally deep at times, and will take a good few listens to accurately digest: even then, who knows? The mind of Budden is twisted beyond recognition, especially when comparing him to the start of his career, moulded by Def Jam. That record company wouldn’t know what the fuck to do with him now, that’s for sure.

What we find is Joe in a freedom mindset – not politically, but simply free to make the kind of album that he actually WANTED to make. That alone is a virtual miracle in this day and age. So we get long songs, more than a few clocking in at over SIX minutes, plus heavy concepts, story-telling narratives and almost no dumbing down in lyrical complexity. It also raises an interesting hypothetical – when the reins are left to the rapper alone, can they retain that sense of objectivity necessary for creating the right mix of songs and beats on that album? This is, perhaps, the crux of the album, and a point that we shall come to later on in the review. Contrary to popular opinion, Joe doesn’t seem frustrated – if anything, he is older and wiser, wisely quelling the beef with The Game to collaborate, and listeners shouldn’t confuse SOUNDING crazy with BEING crazy. He is exploring his ARTISTIC dark side and it is crystal clear that he has stopped editing his lyrics – in the best possible way. Thus, he ends up saying the kind of shit that most of us think but never dare to vocalise – not in the way the Eminem used to about pop culture, but those moments when the lights are out and there is nothing else to face but your own thoughts. The double-header of “Exxxes” and “I Couldn’t Help It,” both produced by The Klasix, take some time to comprehend fully, but once the penny drops, they should take your breath away. Other standout songs include the blistering end sequence incorporating “Angel In My Life” with “Pray For Me” – numbers that could have been cheesy if they were handled with such care. Yet picking out individual songs seems crude, because this is meant to play through – many of the songs wouldn’t fare quite as well when taken out of sequence, such as the Quan-helmed “Happy Holidays.”

I think I get what Joe Budden is trying to do on “Padded Room.” I say “think” because there is a chance that I could be wrong, since this isn’t a clear-cut album with an instantly identifiable explanation attached. He seems to weave in and out of the “Padded Room” concept, occasionally forsaking it for the sake of a good old-fashioned song (that is one theory justifying the placement of “Adrenaline”). What must be made clear is that Joe Budden is excellent lyrically (and switches up his flow JUST about enough to keep it varied) – this should prove as no great shock to anyone that has listened to his “Mood Muzik” series, and PR feels like a natural follow-on. That, however, is part of the problem. Musically, this isn’t a terrible bunch of beats – but it certainly isn’t good enough, and is no way near on par with Budden’s rapping. Blastah Beats and The Klasix handle nine of the tracks between them, and the quality level is underwhelming – that isn’t to be confused with production that is deliberately simplified to let amazing MC’s shine. No, these beats are just plain average, forgettable. Meanwhile, the producer of lead single “The Future” is the aptly titled Fyu-Chur – who apes the commercial radio-friendly The-Dream sound with suitable panache, meaning that the track works well enough. Therein lies the conundrum – if you are going to use unknown/cheaper producers, you have to make sure that the beat is good enough.

Goodness knows that there are enough producers out there – and the variation in quality between them is immense. Pick a beat from a guy in college – it could be amazing, it could suck. Pick one from the UK or Belgium, awesome or loathsome. It is hard work separating the wheat from the chaff, and that is the failing that undermines this LP’s quest for classic status. Joe Budden has stepped his game up, so the music should have taken that step with him. Perhaps the success of the “Mood Muzik” series muddied the waters â€“ because fans expect an album to SOUND like one, not like your best mixtape. It reminds me somewhat of the Clipse – first album, commercial, lots of money behind it, hits. Second album left to languish for almost 4 years – in the meantime, they get busy with some great mixtapes. Did “Hell Hath No Fury” have the feel of the “We Got It For Cheap” series? Hell no. It managed to get the single best performance from the Neptunes over the length of an album, and the Clipse stepped their game up too, creating a classic. This is not the case on “Padded Room” – and not having the budget or Neptunes friendship is no excuse. There are so many talented producers out there DYING for a big break – to get a track on an official Joe Budden album, shit… Most of them would have given their best beat for FREE. Therefore, whoever had the final say-so on the beat selection is the main culprit for the failings on the album – if it was Joe Budden himself, then more shame him, because he also turns in a superb lyrical performance that rap fans will appreciate as one of the most interesting efforts in recent hip hop history.