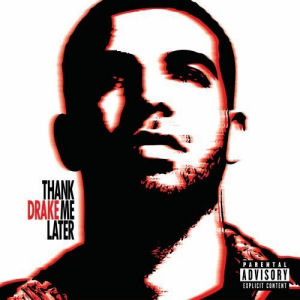 I’ve had my fair share of girls. Hell, I’ve probably had a slice of your share too. Since one can’t simultaneously date all of them forever, it’s fair to assume that relationships begin and end, with the inevitable moment when you “bump into your ex.” That split second when you see each other encapsulates a whole planet of emotions, feelings, memories: the floodgates of your time together are reopenedâ€¦ Alright, fuck that – REALLY, it’s about who WINS. Seriously. And the worst thing is that you can’t even delude yourself: there is almost always a clear winner (more of that “almost” later), and both of you tap into that universal scoreboard. Naturally, I’ve played both roles: glorious victor, decapitated loser. Now you’re expecting me to tell you that when you lose, it’s horrible, the worst feeling in the worldâ€¦ It’s not.

So to “Thank Me Later” â€“ the confidently titled “debut” album from Canadian star in the making, Drake. The voices in my head whisper that he blatantly wasn’t unsigned and “So Far Gone” was really just an elaborate marketing coup. He was already in bed with Cash Money and well on his way to making it. The uber-cynics would state that his lack of street-cred forced a complex bullshit back-story to be created, in order to distract everyone and let them focus on music. Either way, TML is a clear continuation from his first effort, and the first three songs are designed to lead you from that to this. (Before we get to the music, however, a small caveat: I couldn’t give a flyer if Drake is black, white, mixed race, Christian, Jewish, Canadian, rich, poor, ghetto, suburban or â€“ apparently worst of all â€“ a former child TV star. He deserves to be judged by his musical contribution.)

“Fireworks” opens up the album in lush style, an appealing piano groove featuring a slight contribution from Alicia Keys, lending nothing more than her name and a repetitive chorus (and what can only be described as inappropriate background moaning for a pregnant lady). “Karaoke” is probably the track he had in mind for Sade â€“ of course, that was wishful thinking but in fairness to Drake, she would have transformed it from good to great. Again, synth pads and modulated drums are the order of the day, and that continues on “The Resistance.” The tracklisting at such an early stage threatens to sabotage the flow of the album, a slavish continuation from the “So Far Gone” sound that almost takes the steam out of the album after twelve minutes â€“ I say almost because firstly, “The Resistance” is actually an intelligent and classy offering, and secondly it leads into his first single. “Over” was a somewhat surprising choice to lead with, although reminds me a touch architecturally speaking of “Can’t Tell Me Nothing.” It is a genuine banger, practically perfect â€“ the lyrics are solid, he doesn’t over-croon the chorus and the Boi-1da beat is inspirational.

Possible future single “Show Me A Good Time” is solid and affable, featuring a nice beat from Kanye (like Kid Cudi’s “Heart of a Lion” on Prozac). The darker “Up All Night” features Nicki Minaj â€“ and just based on that information alone, you’d assume it’s a fuck song. But no, it’s a shit-talking ode to Young Money, and Minaj outshines the host with a truly pitch-perfect verse. She may not be advancing the cause of the Suffragettes anytime soon, but she is growing into a major force to be reckoned with, make no mistake. I’m sure someone, somewhere, will like “Fancy” but it’s the undisputed nadir of TML, sounding as if a love struck six year old wrote it, after his little brother made the beat. T.I. damn near crucifies his career just by being on it, let alone sounding as terrible as his verse truly is.

Back to a more hybrid sounding SFG sound, updated a touch for TML â€“ the sexy “Shut it Down” features The Dream, and its surplus length is rescued by a clever climactic sequence. “Unforgettable” is a strange number â€“ it samples Aaliyah, features Young Jeezy and is all over the place both musically and lyrically. Yet, it works well â€“ at least it shows ambition, as well as seeming more genuinely heartfelt. The pre-requisite “Jigga-approved” track is up next â€“ the black, swelling force of “Light Up.” It initially sounds corny with “epic” drums and no melody, but actually it’s an appropriately understated backdrop for the two MC’s to flow over. How do they perform? It depends on your perception, perhaps. For my money, it’s average with a few hot lines (like the “Barzini” one), especially compared with the brilliant “Ignant Shit” of “So Far Gone” â€“ the moment that Drake really grabbed my attention. Lil Wayne shone on that track too, and their (also pre-requisite) collaboration on this album initially sounds like a cheap “A Milli” knock-off. “Miss Me” does, however, turn into a somewhat likeable song, although you might have to mentally block out Drake’s catchy but misplaced chorus.

An unnecessary skit follows, leading into “Find Your Love” â€“ the Kanye West-helmed second single. It is a smooth R&B number, no rap, with repetitive but indelible melodies. It’s no classic, but it is a definite success. However, judging from reports, Drake had to beg Beyonce â€“ directly writing a letter to her â€“ to release the track, as Kanye had initially promised it to her. There is something strange and jarring about that (if it is true, you never know in the music biz). Regardless, it exposes one of the problems with “Thank Me Later” â€“ for an artist with undeniable hype/buzz, there are very few potential singles. The perfectly balanced “Over” was superb and bold, getting us hyped, dreaming of an album in that vein. “Find Your Love” is really the only other potentially big choice, yet it honestly sounds like a “third/fourth single” choice. I may be shortsighted, but I can’t hear anything else that will truly boost him â€“ even in the way his feature on the bright “Say Something” did. Speaking of Timbaland, he wraps up the album with a completely unforgettable beat that plays chicken with traditional melody, losing badly.

As far as lyrics and subject matter go, it’s relatively simple to understand, once you figure out Drake’s favourite framework: Duality. He very carefully deals with the dual-aspects of life and love, always flipping the coin within the same two bars. There are countless examples (“I’m just such a gentleman, you should give it up for me”) and it can get predictable but for the most part it works well. He deals with numerous matters of the heart, not to mention fame, money and friendship. As a combination, “So Far Gone” and “Thank Me Later” genuinely remind me of the early seasons of “Entourage” (the HBO series). Drake is Vinnie. He fucks a whole lot of girls that get progressively hotter, whilst occasionally liking some of them. He deals with fame, fortune, his crewâ€¦ It’s fairly successful, but something feels amiss this time around. Whilst this isn’t technically a sophomore slump, there is very little that compares favourably to “So Far Gone” â€“ a divisive album/mixtape that challenged convention, and surprised/impressed in equal measure (Guido Stern certainly wasn’t overstating the case in his review). This is perfectly comely background music, but nowhere near as compelling as SFG. It’s not BIG, it’s not bold. And that’s perfectly fine sometimes, but this needed to be. For someone that spends more time thinking about existentialism than Sartre himself, this is an album that simply exists without much purpose. It’s extremely far removed from “Get Rich or Die Trying” or “The College Dropout,” debuts that were focused/messy, had hits/joints, spoke to the streets/everyman, all at the same time. This just feels like Drake’s pet project, and most people that listen to this won’t connect that much, they won’t truly care.

Back to my original point at the start of the review, when you see your ex. Winning is the best feeling ever, losing the worstâ€¦ Except that it’s not quite that simple. There’s another option that is far less acceptable: Apathy. When you’ve built up and played out a scenario in your head where you’re doing spectacularly well/badly, at least both parties know the lay of the land. But you haven’t countenanced the possibility that they really don’t care. At all. That’s the biggest slap in the face, the moment when you realise that they think so little of you that you’re not even on their radar – you’re not “that” guy, you’re just “some” guy. Apathy. And that’s the danger that Drake faces with “Thank Me Later.” He’s competing with a mixtape that was a runaway success in getting his name out there, and expectation has met with pressure, with everyone examining him much more closely now. If he had succeeded with dropping a classic, or even just putting out a really poor album with a few dynamite singles, he would have made an impression. But he has, unfortunately, created a consistent album that simply exists, without grabbing your attention. Slew of hits? Not really. Classic album cuts? Not so much. Sure, girls will like it; it will sell pretty well. Otherwise, it’s just decent track after solid track, seven times over (aside from “Over” which is superb). This is not a bad album â€“ on the contrary, I like it. Drake is a clever guy, sure â€“ but he will look back on this with disappointment at the imbalance of it, the intermittent connection, the lack of boldness. He should progress and improve (unless acting lures him back again), but this is nowhere near the buzzworthy Great Rap Hope we witnessed on “So Far Gone” â€“ this time around, it’s more like “2 Far Gone.”