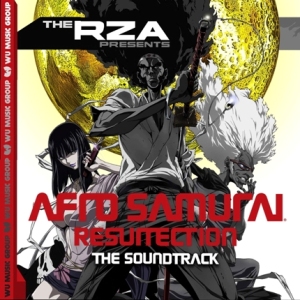 I have a lot of respect for Robert Diggs, AKA the RZA. He has produced some of my favorite music, and several of the best hip hop albums of all time. The way he and the fellow Clan members engineered their empire was brilliant, and I admire how he has tried to develop as an artist. His solo work doesn’t always excite me, but he never makes craven attempts to cash in on the latest trend. He’s sort of like a Bob Dylan or John Lennon of hip hop, someone whose creativity might ebb and flow, but who always maintains a position of revered royalty.

It must be said, however, that the Wu brand has taken a beating in the past few years. Both Ghostface Killah’s “Big Doe Rehab” and the Wu Tang Clan’s “8 Diagrams” were disappointing, and the RZA and GZA’s most recent solo outings were solid but not essential. More worrying was the public squabbling over the direction the RZA took on the production on “8 Diagrams,” and then the actual production itself, which tended to be depressing, grey, and lethargic. RZA’s always been dark, but “8 Diagrams” seemed to be suffering from Seasonal Affective Disorder. So as excited as I might normally be by the prospect of the RZA doing the soundtrack to an anime series about a samurai voiced by Samuel L. Jackson, I approached “Afro Samurai: Resurrection” with caution. Thankfully, the RZA delivers on the beats. It’s the vocals that prove to be the problem.

For one thing, something seems to have gone wrong with the mixing. The vocals on the opener, for example, sound blown out and distorted, and this is on three different stereo systems. On several other tracks the vocals are mixed too low, and as a result they sound muted and buried underneath the beats. I’ve noticed this issue of vocal levels on several hip hop albums lately, and I’m wondering if it is due to how ultra-compressed all music is these days, or if it’s a product of the pieced-together nature of hip hop “collaborations,” where each rapper’s verse is recorded on different equipment. Maybe it has to do with the RZA pulling a rock star move and making his beats louder than the MCs. Vocal levels were a minor issue on “8 Diagrams” and “Bobby Digital,” but it is so bad on this album that it detracts from the listening experience. I don’t understand how someone who is such a genius with the boards like RZA could end up producing record with such a janky sound. At times it’s sub-mixtape quality.

Whatever the cause, the vocals on “Afro Samurai: Resurrection” seem like an afterthought, and not just because of the way they sound. While Wu-Tang Clan members GZA, Inspectah Deck, and Ghostface show up to deliver verses, most of the rapping here is by Wu also-rans, members of the ever-expanding Wu Empire. Several, like Black Knights and Rah Digga, hold their own, while others are not quite ready for prime time. “Whar” is basically a reworking of the beat from “Clan In Da Front,” and the verses from both the RZA and Ghostface took me straight back to “Enter the 36 Chambers.” As tarnished as the Wu brand might be, they have moments when they remind you just what a potent force they can be.

The rappers attempt to recreate the plot of the show on their verses, which seems perfectly suited to the Wu’s kung fu take on street life. There are moments when the concept is fully realized, like on “Arch Nemesis,” and “Bloody Samurai.” RZA seems to be trying pull the same trick he pulled with “My Heart Gently Weeps” (reinterpolating a popular 60s song and reimagining it as hip hop) on “Blood Thicker Than Mud.” The song reworks Sly and the Family Stone’s “Family Affair,” complete with guest appearance by Sly Stone himself. I hated “My Heart Gently Weeps,” but the source material is better suited to hip hop, and “Blood Thicker Than Mud” is a much more successful song. RZA also works with two female singers; Stone Mecca adds her soulful voice on several hooks, and Thea Van Seijen has several solo tracks that feature her voice, which is a little Billie Holiday and a little Erykah Badu. Thea’s songs add a nice melodramatic flair, reminding you that this is indeed a soundtrack.

The RZA delivers the dark, brooding beats he’s known for. Tracks like “Bloody Samurai,” “Bitch Is Gonna Get Ya,” and “Arch Nemesis” are proof that the RZA is still relevant. He’s also experimenting a little here, both with the R&B flavor of “Fight For You,” and the rock-tinged “Dead Birds.” He even has a 10-minute long finale, “Take The Sword Pt. III.” His sound is a little less sample heavy than 90s production, and basically maintains the signature RZA sound with updated equipment. In fact, I almost wish this was an instrumental album. As an instrumental album with two or three vocal tracks, it would have been impressive. As it stands, it is a half-realized concept album hampered by dodgy sound and inconsistent rapping, but saved by the few great tracks.