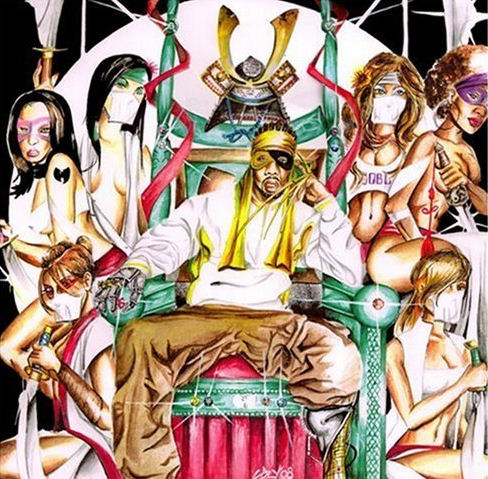 “When I was stressed I would head to the rest
Then the pads on the SP-12 got pressed
Makin beats for the streets, so the family could eat
In ’93, Wu-Tang Clan dropped their first LP
We went platinum, *whoo-peesh*, yeah we flatten ’em
Pockets got fat and um, went and got Cap and ’em
Staten’s on the map and um, Brooklyn Zu is bombin ’em
All around the world, Killa Beez start swarmin ’em
You can’t stop us, you can’t block us
Rock us or mock us, knock us or top us
Better sit back and watch us…”

It’s fair to say that no one can articulate what RZA means to the Wu-Tang Clan more than Robert Diggs himself. On “You Can’t Stop Me Now,” the lead single off RZA’s newest Bobby Digital project, the point is made abundantly clear – without his beats his fam would have starved. Arrogant? Perhaps. Many of the rappers involved in the Clan would have succeeded as soloists even if the collective group concept had failed. When making that argument though you have to imagine each artist’s career unfolding differently – no “Tical” for Method Man, no “Ironman” for Ghostface Killah and so on. The roots of each Clan member’s career were seeds planted by RZA, watered and fertilized by his beats, and put under the bright spotlight of the Clan’s popularity to grow and thrive. Diggs could just as easily have called his lead single “You Can’t Stop US Now” because after 15 years and countless naysayers the Wu-Tang family still reps hip-hop locally and globally like few others can.

“Digi Snacks” is ostensibly an album from RZA’s alter ego Bobby Digital, but in 2008 there’s really no difference between RZA and Bobby. The comic book style cover art admits as much – all Diggs has to do to go Digi is put a jeweled glove on his right hand and a mask over his eyes. Even Clark Kent’s journalist shtick seems like more of a disguise since he acts mild-mannered and meek while wearing his spectacles, while RZA and Bobby Digital speak with the same bold confidence heard on “Money Don’t Own Me”:

“The dangerous dynamite dosage, mind full of explosives
Digital brain is the closest to Moses
Civilizing came, the flame inside the holster
Revitalize the game, the name’s on the poster”

As if one really needed any further evidence of RZA’s high self-esteem, the press blurb sticker on the cover of “Digi Snacks” only quotes one person – RZA himself. He describes “Digi Snacks” as being “the definitive and most focused album in the Bobby Digital trilogy.” That’s one hell of a claim given “Bobby Digital in Stereo” was a Wu-Tang classic and “Digital Bullet” was not a bad album in its own right. For argument’s sake let’s say “focused” means either an album produced entirely by RZA or an album with one singular overriding concept carried through all 15 tracks. Unfortunately for Mr. Diggs “Digi Snacks” does not meet either criteria. That’s not to say the outside producers did a bad job in any way. David Banner’s work on “Straight Up the Block” is an unexpected and pleasant surprise, effectively chopping up Jay-Z samples while encouraging RZA to spit a slowed down (yet somewhat nonsensical) rap flow. “Creep” has a sitar sting like killer bees on the swarm, but it’s King Tech who makes it connect. “Long Time Coming” accurately describes the Wu fan’s anticipation of a new RZA album, and the heavy keys mixed with ringing bells take the track from earthbound origins straight to outerspace, but it’s Panauh Kalayah who provides the rocket fuel for the journey. Lyrically Robert Diggs is all over the place too, not just from song to song but within the songs themselves. On the stinging slap of “Booby Trap,” RZA can’t make up his mind whether he’s telling a narrative, being braggadocious or offering jewels of wisdom.

“Pocket fat be Jabba the Hutt, Clan gallops up
Feel the Force of my steel, but you can’t count the caliber
Digi, Digi, Digi, all inside your city
Microphone on the roam, like Capone and Frank Nitty
[…]
Do to trading, they infiltrate with persuasion
That desire to rob and steel and make slaves of all
Living luxury, destructively, conductively
Unproper nature, privately and publicly
Man so stupid when confronted by something he don’t
understand, he shoot it, the whole world’s polluted”

To put it bluntly “Digi Snacks” is anything BUT focused. That’s not to say there aren’t gems on this album that both RZA and Wu-Tang fans will enjoy such as boom bap crooner combo of “Try Ya Ya Ya” or the throwback stripped down Wu-Tang Clan sound of “Drama” featuring Monk and Thea. Nevertheless out of the trilogy of Bobby Digital albums this is the weakest installment. Getting a sequel to the first two volumes was an unexpected and pleasant surprise, but outside of his hardcore fan base of Wu-Tang Clan fans there’s not much chance of this album succeeding. The great irony of RZA’s career is that he has launched so many solo careers while as a soloist he finds himself looking for an alter ego to escape his own limitations. A truly focused RZA would accept those limitations, say FUCK THE HATERS LET ME DO ME and make an album with his own beats and rhymes from start to finish. This trilogy needs a fourth volume to truly be complete.