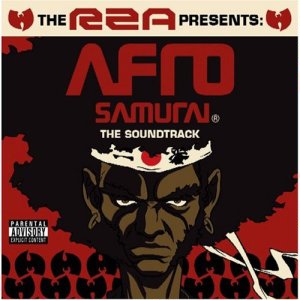 Wu-Tang, at its core, is much more than a hip-hop group. Roundhouse kicks, flying shurikins and poorly over-dubbed samurai dialogue are as important to their legacy as kicks, snares and the always-drunken Dirt McGirt. They are an ingenious concept, if not an equally nerdy one. Fans of the influential super-group have known that frontman RZA is as much a cinema guy as he is a highly regarded beat maestro, so his recent commitment to Spike TV’s new anime cartoon “Afro Samurai” comes as very little surprise. His past works in film, all incorporating if not the subtlest dashes of hip-hop, have been fruitful and well-documented, and the splicing of his two favorite elements frighteningly good. At the end of the day the soundtrack to his latest endeavor stands as a fascinating and equally ironic concept; the RZA sampling kung-fu from his very own show.

RZA’s production is predictably good, but the instrumental pieces specifically scored for the show are probably better than his actual beats. “Tears Of A Samurai” is a beautifully percussion-less wind/piano piece, while “The Empty 7 Theme” opens with booming ’70’s funk only to slip into a snaking thump not unlike his contributions to the “Kill Bill” movie series. His beats are no cripples – “Who Is Tha Man” is an acoustic guitar-driven bop, and the bonus track “So Fly,” despite Bobby’s utterly ridiculous sex rhymes, stands out with its excellent gangster movie horns and racing break.

RZA, who handles a good deal of microphone time himself, is unfortunately still RZA. Big Daddy Kane badly outshines the GZA on the aptly titled “Cameo Afro,” and Q-Tip is extremely underwhelming on “Just A Lil’ Dude.” Talib Kweli, who apparently looks to have the busiest winter in the history of hip-hop, spits some mighty crafty darts on “Certified Samurai,” looking especially good next to Lil’ Free (“dick longer than the O.J. trial”). Meanwhile, the Wu understudies remain understudies for a reason, emcees 60 Seconds, Suga Bang and others proving to be even the RZA’s vocal inferior. True Master does lend a fairly impressive verse to “Take Sword Pt. II.”

The soundtrack as a whole is extremely cohesive, save for some slightly random R&B pieces that the RZA unsurprisingly had nothing to do with. Still, they do their part to moderate the listen, and it’s funny knowing M1 of Dead Prez produced the smoothest, most Brandy-esque number this side of “The Boy is Mine” for Maurice’s “Baby.” If you like the musical correspondent to “Afro Samurai,” it might be worth your time to check the ‘toon. If you dig the RZA’s beats, it would certainly behoove you to watch out for the upcoming Wu-Tang reunion. Any way you slice it, Wu-Tang and Sam Jackson are clearly a match made in heaven.