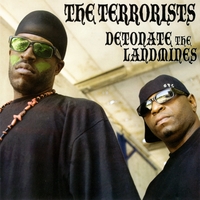 The Terrorists :: Detonate the Landmines

Don’t call it a comeback! Well technically the return of The Terrorists is a partial comeback. Back in 1992 the group burst on the scene with their “Terror Strikes” album on Rap-A-Lot Records. Even in an era of hardcore acts like the Geto Boys, The Terrorists stood out with their mix of hardcore rap, politics, and social commentary. They followed up with “Full Scale Attack” in 1995, but had been relatively quiet since. Dope E actually took off on a solo career as a rapper/producer, even undergoing a name change for a few years. Egypt E truly went underground without any real noise made since the group’s 1995 release. 2008 found the duo reunited and not missing a step. “Detonate The Landmines” is a dope mix of political and social rap, full of the same dope beats and thought provoking rhymes found on their debut CD.

Those familiar with The Terrorists should know what to expect. The uninitiated should glean from the name that this is not your typical Texas gangsta rap. The Terrorists take their name seriously. On “Terrorize Tracks” they make it clear that they restrict the terrorist activities to wax:

“When you go to sleep, we up making beats
When you go to sleep, we up writing rhymes
When you go to sleep, we up smoking a dime
Laws want to say that we committing a crime
Don’t mistake me on the street when I’m looking homely
Dirt like Treach, all by my lonely
Fuck the wack sound now, it’s time to show fools
Top notch quality, illing on Pro Tools
Most producers act two face
Stingy then a motherfucker when it comes to Cubase
That’s why a lot of studios get jacked
Thugs pulling gats reaching for unlimited tracks
Tie up the sound engineer and take him hostage
Put the 42 year old white man in a box, kid
Racket ball in his mouth and in his eyes put thumb tacks
Terrorize his tracks take our motherfucking drums back”

It’s clear that this is a very figurative terrorism advocated by the Houston natives, but one can feel the seriousness in the lyrics found on “Drama Constant:”

“See the God in a turban and a white robe
I survive, have more balls on my body than Job
You hate me huh, well see I love this
Pro black attitude, my aura will teach like Frederick Douglass
It’s time to put the real in place
For all you faggot motherfuckers watching “Will & Grace”
I peel your face back with a cap or a rap
You getting slapped no dap, you can’t adapt to the trap
Plant a bomb close on the street Montrose
Next to the old Church’s, across from McDonald’s
Fuck with me, us, Terrorists bust
I ain’t in love with nothing, test me I ain’t bluffing
One bullet will have you taxed off
The pain hurts worse than getting your pubic hairs waxed off
Fuck the devil’s world, man I bump you off with a shottie
When I get you, you’ll be like “You got me!”
The only way this opium like hypnotic spell can be broken
Is by right knowledge, right wisdom, overstanding no joking
It’s The Terrorists, we got you scared when the bomb drops
Making you get out the rap game, take your equipment to the pawn shop”

The Terrorists remain dead serious throughout the 18 track affair, but they avoid becoming monotonous. They drop their fury on politicians with “That’s My Motto:”

“Mo Dead Bodies” and “SPC Get You” are menacing tracks where The Terrorists are joined by fellow South Park Coalition associates Murder One, Point Blank, K-Rino, DBX, and AC Chill. The collective shows off its lyrical skill nicely. “Son of a Hustla” finds the duo getting a bit more personal, explaining just how they became lyrical terrorists. “Street Gangsta Politics” reminds us that despite their political motivations, one should not get it twisted as Dope E and Egypt E are from the hard Houston streets.

13 years later The Terrorists haven’t lost a step. In fact, they seem to have progressed nicely despite the long break. “Detonate The Landmines” is a dope album full of heavy political and social raps. Even though a few songs sound a little dated, there is plenty of knowledge to gain from Dope E and Egypt E’s rhymes. The beats are nothing to scoff at either as Dope E and the entire Landmine Productions crew handles things quite nicely on this album. The only setback is that just like their first two albums, “Detonate The Landmines” is already out of print. Unless you live in Houston and have the hook up with a local mom and pop or The Terrorists themselves, the only place to get your hands on this is at SoSouth.com. With the reasonable price and dopeness of this album, I’d say it’s very much worth the purchase and the wait.