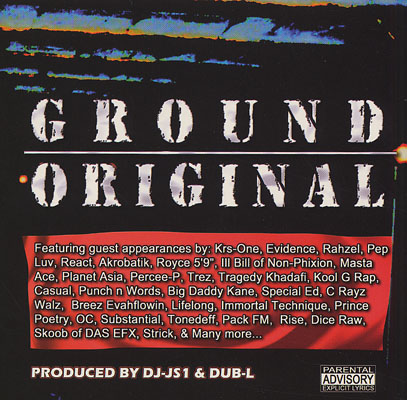 The only thing nobody seems to be sure of is how to spell his name – is it DJ-JS1, DJ JS1, or DJ JS-1? Even his own label is confused – they use the first on the cover and spine of his “Ground Original” CD yet the third is what is featured on his website. Who cares though? Fact of the matter is, JS-1 is an underground hip-hop turntablist straight out of Queens who’s been making a big name for himself. He’s opened for Sugar Ray and Orgy, toured with Rahzel from The Roots, and blessed the phonographs live on MTV on New Year’s Eve.

Getting large has not changed JS-1 though. As much a hip-hop fan as an artist, JS-1 stays grounded in original hip-hop with a whole album showcasing the best of the best. The cover proudly proclaims it: “This is not a mixtape – this is an album with ALL ORIGINAL songs.” Say word! So get down to the “Essentials” with Rahzel on the beat and hip-hop legend KRS-One on the mic

“Well it’s the hardness – the realness, on the corner – you feel this
You feel Kris, comin through outrunnin you with steel and
Time again for the rhyme again, for the real MC to shine again
Start again – I’m the tiger in the woods who rips your cardigan
Let me start it again, cause you don’t hear me yo
You scream battle; you in the face of a DJ that can really flow!”

High praise indeed considering the Blastmaster has worked with them all, from the late great Scott LaRock to DJ Premier. This isn’t just an album for rappers to pay tribute to a great DJ though, this is a showcase to spit skills. Who better then to flip it than Boston’s own Akrobatik?

“The crowd we keep it screamin like fastballs
Feel the lyrics whistle in your ear as they speed right past y’all
Brothers see me come and start to grabbin they honeys tight
Easy Star, I’m just rockin this venue cause the money’s right
– plus I wanna drop gems
that make you feel good like you shined up the whip and copped rims
I’m whylin on the stage like your pastor dropped hymns
And leavin it indented with the prints from my Timbs
Plus I’ll leave your brain tinglin at the stem”

The ground this original album stands on might as well be UNDER-ground. There’s nothing commercialized here, no R&B crossover songs from B2K or 3LW, just the real hip-hop. That means the pounding bass and ferocious snaps of Royce the 5’9″ on “Lights Out.” That means Masta Ace and Special Ed take it back to Crooklyn on “What Am I?” parts 1 and 2. And that means you’ll hear from two of indie rap’s finest on the same track – Percee P and Planet Asia simultaneously blessing the off key piano beats of “Unstoppable”:

“Better renew your verse, your crew’s the worst
Claimin what they can do to Perce’ or who’s the first
I’m sippin Folgers, rip and blow ya up like hittin soldiers
When I’m flippin hold ya guards I’m burn them in eyes like spittin cobras
Man you bore me, don’t blame no can or 40
Peep you and your shorty, so don’t stand before me”

Quite honestly, I’d transcribe the rest of P’s flow but he flips verbals so fast it would take me another hour to catch it all! You won’t have any trouble understanding Kool G Rap on the lushly Domingo produced “Take a Loss” though, a song so sweet you’ll immediately regret that it and more like it weren’t part of his “Giancana Story”:

“Yo if it ain’t about the dough then I ain’t with it at all
Wrong nigga to call if the biddin is small
Big rewards, spit at them all
Click fall, double digit and more
Run up in buildings and hit ’em in halls
Go shoppin, get ’em in malls
Dare at the head, miss and shit on the wall
Pitfall and shiver in morgues
You got big balls I slit ’em
’til they sliver you drawers and river the floors
Take comes of the safety locks
You better know’s it for the cake we rock
Or them pies up in the pastry spot
Wasn’t for your man, I’d take these blocks”

Other than a few exceptions such as these, JS-1 and Dub-L handle most of the production throughout this album – and it certainly doesn’t suffer for it. Casual sounds like he’s rocking with the Hieroglyphics. Big Daddy Kane could for all intents and purposes be rhyming to Mister Cee or Prince Paul. And when Dice Raw busts his “Spontaneous Freestyle” you’d really think ?uest was in the mix, but once again it’s Rahzel providing the beat. From the names you might not know well like Lifelong & Immortal Technique on “Audio Technician” to underrated hip-hop veterans like O.C. on “Beyond” to the next level shit from C Rayz Walz & Breez Evahflowin on “Drugs in My Veins,” this is the DJ album you’ve REALLY been waiting for. Envy what? Clue who? Forget all that, DJ JS-1 is not that kind of DJ. This spinner doesn’t scream and yell over his own beats, he makes the tracks and cuts on the chorus and lets the underground’s finest do the talking. Now THAT’s original, and LONG overdue.