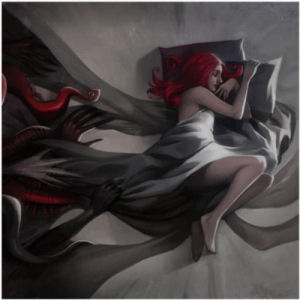 To clear up any confusion before we go further, the definition of “oneirology” is the study of dreams. This word was so obscure I actually had to teach it to my spellchecker while writing this review so it wouldn’t keep suggesting a correction over and over again. I don’t know if Deacon, Kno and Natti hold any Ph.D degrees in this field, but they certainly hold doctorates in dope hip-hop. Since they first burst on the scene in 2001 with “Will Rap For Food” (sans Natti, who would join the group several years later) this Lexington, Kentucky group has earned a reputation among underground heads, progressive hip-hop fans, and discerning rap snobs as being musically and lyrically next level. Their career has in many ways paralleled that of Little Brother – a beloved and creative artistic hip-hop group with Southern roots looking to get album sales on par with the healthy amount of respect they have.

Thankfully for those ProgHipHop heads and rap snobs, CunninLynguists didn’t go the “we’re retiring as a group so catch us on solo albums or cameo appearances” route that Little Brother did. Kno is as able musically as he is lyrically, and the production for “Oneirology” reflects both the intent to nod your head and the theme to keep you in a lucid state of REM. There’s a very appropriately dreamy sound to this entire 50 minute album, as though you’re floating through a cloudy haze of hip-hop while riding on top of a Persian rug. Like any good sleep, some of the dreams seem to make perfect sense and run in consecutive order like a motion picture, while other moments seem complete disjointed and non-sequitir. There’s a lot of singing within and throughout the album, and the voices seem to beckon you onward like a siren song, pulling you further into their deep ocean of musicality, yet at no point are you in danger of crashing and drowning. They steer you correct even when they decide to (tongue fully in cheek) “Get Ignorant”:

“Do I gotta get it ig’nant and show my pigment on the job?
Slap the darkest part of my hand across jaws
These days and times with jobs hard to find
You gotta work a salt mine or work an assault 9
Most folks barely stayin afloat through proper channels
And thank the rich sheik with black camels and slaughter mammals
They run the globe with mind control in designer sandals
But life’s a skinny bitch, it’s a struggle to get a handle
I’m about to just +Break Bad+ like Malcolm’s dad”

“Through all the petty dramas I’m calmer than a sloth
But the shit don’t change like if Obama woulda lost
I done worked my ass off about twenty-eleven years
And I’m usually far from anything that Heaven fears
But I’m feeling off-kilter, I ain’t about to kill ya
but I am about to loosen up this filter, here’s you
jerkin off to Halle Berry on the shitter (no!)
Then firin a nigga cause he’s checkin on his Twitter (no!)
You mad cause ain’t nobody taggin you in all the pictures (NO!)
Well here’s a good one of you taggin your wife’s sister
like that!!”

As you can see humor plays a strong role in the CunninLynguists steelo, although if you never experienced their music before you probably would have guessed that from the double entendre of their name. It’s not so much an intent to punch their way to punchline supremacy as it is an enhancement of what they’re already saying that either adds levity to how seriously fresh the raps are, or makes the overall flow more memorable. It’s hard to imagine how this album could be less though – starting with the ethereal “Predormitum (Prologue)” which fully invests you in the sleeping concept while scratching in the voice of Biggie Smalls saying “it was all a dream.” “Darkness (Dream On)” featuring Anna Wise is mellow enough for AM radio but the soft spoken rap and calming breeze of a melody don’t make this song harder and more advanced than 95% of rappers today. Speaking of which, “Hard As They Come” featuring Freddie Gibbs definitely fits the bill, sounding like BeeGees met Ice-T and De La Soul in a BlendTec and came out smooth. The dream takes a nasty turn on “Murder (Act II)” featuring Big K.R.I.T., and at one point they even break you into glass with “Shattered Dreams,” but in a compelling and entertaining fashion.

Even when you think “Oneirology” couldn’t really get any better, you realize that it’s only half over and that you’re rocking to the uplifting “Stars Shine Brightest” featuring Rick Warren. The Cunnin crew have some inspiration over the synthesized backdrop: “Just look up! And marvel at all the constellations/Egyptians built pyramids from these creations.” Fellow QN5 affiliate Tonedeff gets down on “Enemies With Benefits,” which starts with scratchy samples then gets sweeter than a pot of honey. The album’s longest track “Dreams” featuring BJ the Chicago Kid and Tunji has a hook you’ll find stuck in your head for days to come, crooning “Yeah I know it gets hard/but we made it this far/and we never gonna stop, even when we reach the top.” By the time you reach the flicking “Embers” at the end of your REM, you realize it’s been one hell of a strange journey but not one that you’d want to skip any part of. This will (with the pun definitely intended) go down as another slept on CunninLynguists classic.