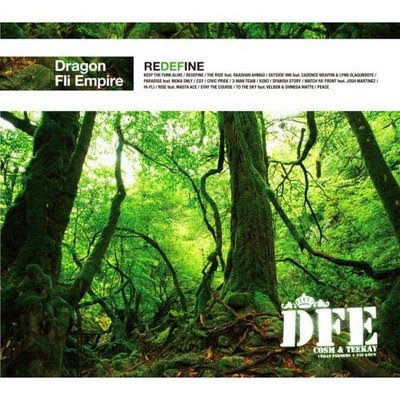 A few months ago, Modenine, a Nigerian rapper, released “The Paradigm Shift,” which, despite its title, signaled little, save another solid effort by a uniformly unspectacular artist. Fast forward through a probable cavalcade of similar titles in the intervening months…

… Dragon Fli Empire, a Canadian group comprising DJ Cosm, who does most of the production, and Teekay, a rapper, released “Redefine,” an album with similar ills and successes as above, dry caput notwithstanding…

And, the common thread? – wishful thinking. Consider the obvious. Rap, for all its problems, has an advantage over most arts – it’s quite competitive, and does not settle in complacency for long. In this way, quality is often the primary goal. Rappers may have other considerations, but being good, or the best, can top the list. Art is often seen as a passive thing done by inoffensive people, but rap is quite spirited. It’s this spirit that drew me to hip-hop, and it’s part of the reason it was able to keep me.

But, this can lead to dishonest, or unknowing, self-assessment. It’s probably the latter, as most rappers, like most artists, are oblivious. Perhaps Modenine is unaware of what a ‘paradigm shift’ entails, or DFE how to capture it. At the very least, DFE tries, but not in very original ways. A good group, these artists want, at least in spirit, to take hip-hop back to its ‘classical’ feel. That’s fine, but there’s nothing new here, nothing truly unconventional, which is especially problematic since they are, by their own admission, influenced by older styles and producers. Although DFE is better in style, lyrics, vocal dexterity, humor, or anything else imaginable, this reminds one of the Cool Kids – lots of style, but little point beyond what is evident on a single listen.

In “Fastbreak,” DFE’s takeover of the world is invoked. Odd electronic rings, samples, scratches, and the throwback, start-stop rhythm and variety of Teekay’s crisp vocals successfully contribute to, basically, solid party rap, and, unfortunately, some of its implications. Lines like “And I use a pen, ‘cuz I don’t carry glocks,” is about as deep as things go. Of course, I don’t expect depth in party rap, but there are ways to get around it, as in Kalri$$ian’s great “Lobby Room” from last year, which juxtaposes hazy production, wit, and playful sleaze against an irreverent feel – in brief, it works on a deeper, more enjoyable level than DFE’s track, and most party rap for that matter.

Next track, “Just That Nice,” sounds like a mellow rehash of the above, and becomes dull by subtraction. The latter half is better, though, as Teekay speeds up his delivery, thus violating the metronome. But, it does not come with a change of substance; it’s interchangeable with much of the material here. “Ride On” has a jazzy, mid-90s feel, with no musical distinction, while “Keep the Funk Alive” is better. Musically, it’s still fairly anonymous – repetitive (but grainy – a good touch for the nostalgic subject) drums, and innocuous keyboard – and has substance, although it’s of the titular kind.

“Redefine” is solid, piano-pushing-the-narrative affair, as Teekay recounts his youth in start-stop rhythm, which, by now, is obviously a stylistic staple, avoiding the banalities that are common in such tales. But, lyrically, or musically, it doesn’t go anywhere past its inoffensive start; it ends as quickly as it begins, with no twist, revelation, or comment. In Art, all ideas are equal; its their execution that counts. “Outside Inn,” is the first single, and Cadence Weapon’s guest verse, although not memorable, works well against the home rapper’s more raspy delivery. Production-wise, the minimalism is good, as it offers 2 or 3 main elements with enough variety between them to keep it interesting. “Rise,” featuring the typically excellent Masta Ace, features his cookie-cutter verse against some of the dullest production on the album –

– and thus, it’s not only forgettable, but bad. Judging by these lines, I sometimes wonder if artists are aware of their own folly and chronic deterioration. For someone responsible for the weird but excellent “Slaughtahouse,” Masta Ace, like DJ Cosm, who similarly has ideas and potential but doesn’t really use them, disappoints.

As it stands, the album is pretty polished, but not in a good sense. All is ‘lush’ to the point of metronome. Both raps and production are solid, but uninteresting and unoriginal, the obvious potential never tapped. “Redefine” does not get beyond a ‘pleasant listen,’ which neither redefines rap nor adds anything considerable to it.