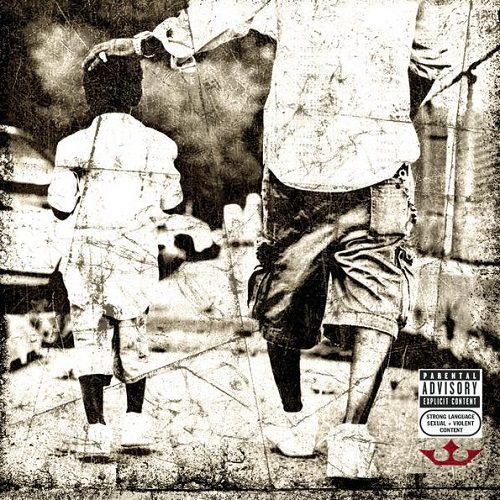 I have to admit I’m a little smug right now. I probably shouldn’t be. Hell, hip-hop purists would clown me and tell me that it’s more of an embarrassment to admit I’m a huge Jim Jones fan, let alone revel in the fact I’ve been calling him the next big thing for years now. Some extremist would even try to blame Jim Jones for the perceived decline in hip-hop in recent years. Still, I’ve been backing the man since I first heard “On My Way To Church” and with each release Jim Jones has gotten bigger and better. “Pray IV Reign” finds Jim Jones making the ultimate come up as he is finally on the major level. Koch never stopped Jones from pushing 100,000 units, but this time around Columbia decided to put their clout behind him. They’ve been aggressively marketing the album too, partnering with Best Buy to release a mixtape before the album dropped and making sure “Pop Champagne” has been playing nationwide. Flash recognized the real when he reviewed the “Pray IV Reign” mixtape and at the time questioned whether the quality of the mixtape was a good omen for the quality of the album. To answer Flash, yes it was. Simply put, “Pray IV Reign” is Jim Jones best album to date.

First thing is first, “Pop Champagne” is the quasi-lead single and it is what it is. I say quasi because the single was originally a Ron Browz song featuring Jim Jones and eventually turned into a Jim Jones song featuring Ron Browz. Labels having artists share lead singles looks desperate, but the track bangs for a party anthem. For those who peeped the mixtape, you will find “Medicine” and “Precious” are the only repeat offenders, so the mixtape is worth the purchase especially for the first track, “Trippin’.” Despite the major label, Jim Jones doesn’t splurge on big name producers. The bulk of his beats come from lesser known producers but sound just as good. The only big names popping up are Ron Browz, Ryan Leslie, and No I.D.. Unfortunately No I.D. only handles “Album Intro,” he could have made the CD close to classic had he been given a bigger role. For those that have complained about Jimmy having a southern influence, the beats on here tend to stay in the east coast style. The only exception is Chink Santana’s “How To Be A Boss,” but a show stealing Ludacris verse makes that an acceptable change of pace.

Jim Jones is at his lyrical best on this one as he skillfully moves from track to track injecting each one with his signature style. Jones’ style is half unapologetic brags and half introspective thoughts. It’s a mix used by the best of rappers so it works well for Jim Jones. Nowhere is his style better suited than the smooth “Rain” featuring Rell on the hook:

“You couldn’t understand how much the pain weigh
So in the hood we love the rainy days
Cuz subconsciously we know the sun’s coming
We love the winter because we know the sun was coming
Remember I got locked the same night my son was coming
All I could was pray they don’t take me away
And lord knows I had the angels on my side
They searched the car, I had the hammer in the ride
A miracle on Flatbush Avenue
I still made it back to St. Bush where she was having you
A newer version, a younger me
I want him to go to school, I raised him up gun free
I swear some places I don’t want him to be
And I swear some things I don’t want him to see
But little boy, daddy loves you truly
So the nights you don’t see know daddy’s on his duty”

That type of emotion is hard to come by and definitely appreciated. Jay-Z impersonator NOE almost ruins the track, but it remains one of the dopest on the CD. Speaking of NOE, it is him and the other Dipset affiliates that brings down the overall feel of the CD. Some might not mind his voice since the lyrics are straight, but his uncanny similarity to Jay-Z is just too much for me to enjoy. Otherwise, the CD remains very enjoyable throughout with street tracks like “Pulling Me Back” and “Frienemies” being balanced by the smoothness of “Precious” and “My My My.”

So there you have it, a finely produced, polished, and performed album from one of the game’s most hated emcees. The production shouldn’t be a surprise since even those who dislike Jim Jones give him props for picking some quality beats. The surprise comes in the fact that Jim Jones has finally found the proper balance in his style, delivery, and lyrics to reach that next level. I know I’ll get hate mail for even making the comparison, but Jimmy does with this album what Jay-Z did with Vol. 2, finding a balance between lyrical tracks, street tracks, and radio hits. Whether this album will propel Jim Jones to the same superstar status is doubtful, but those willing to give it a shot will find a very enjoyable album. Here’s to hoping he will eventually drop his own “Blueprint” or “Black Album.”