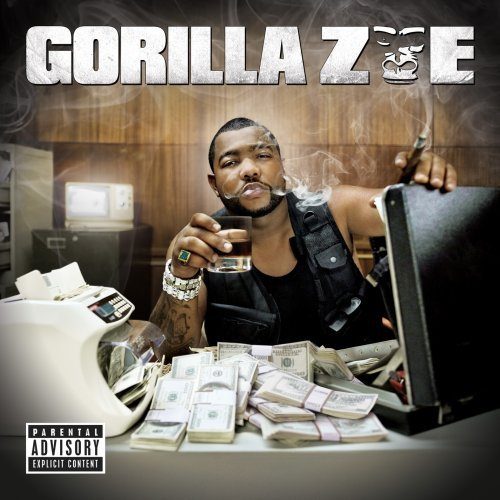 Gorilla Zoe may not be as large as his name implies yet, but he can be happy he’s no chimp either. His debut album “Welcome to the Zoo” sold 200,000 copies worldwide and showed that the A-T-L rapper born Alonzo Mathis had some promise as an artist. For a rapper who talks about rolling on 28’s though, 200K sold is not nearly enough to afford a baller lifestyle. Picture getting 50 cents an album if you sold 200,000 copies and considering the way labels rip off rappers that may be a HIGH estimate. (We won’t even get into the fact most companies charge rappers for music videos out of THEIR share of the profits, not the label’s, which can often leave you flat broke.) Sure you made $100K, but take out the taxes. You BETTER take out the taxes. April 15th is coming and the IRS don’t play. That leaves $70K. Now let’s assume you live in a really nice home or a condo that costs about $2K a month. You’re down to $46K. You bought a bunch of bling bling platinum jewelry to show off your success, and even once nice chain can set you back $15-16K. Now you’re down to $30K. Buy a car for $25K and you can’t even afford to put rims on that, and we’re talking just a REGULAR nice car – not a Ferrari or a Porsche. Buy even one of those and you can forget about the rent, the bling, AND the rims. Good luck affording cheese on a hamburger at Mickey D’s. For Gorilla Zoe to afford to ball he needs his new record “Don’t Feed Da Animals” to go as gold or platinum as the bling that he wears.

The lead single “Lost” should help Zoe in that department. Drumma Boy’s trademark synths and electronic toms tend to fit Zoe like a glove, but both artists went above and beyond on this song and decided to get on some Kanye West shit. Now it’s not quite AutoTune/T-Pain/Lil Wayne style, but it’s definitely some heartfelt singing as opposed to Zoe’s traditional raspy rapping. You might not think someone with Zoe’s deep raspy flow could pull off crooning, but Drumma Boy plays to his strengths and gives him a joint he can sing low and slow over.

“I’m makin this money, just to go spend it
Livin the good life, hope nobody ends it
But who are you kidding? Hey who are you lyin to?
You know if they want you best believe they will find you
I’m lost on the roaaaaaaaaaaaaaaaaaad
and there’s no one to talk to
It’s nowhere to run to, I’m goin in circles
I’m talkin to myself, you got me blazin this purple”

The album’s other promoted single is “What it Is” featuring Rick Ross. The track features a melodic crunk anthem from Zaytoven that’s 50% David Banner and 50% Mannie Fresh, which makes it 100% dope. Despite the recent trials and tribulations Ross has had with his credibility, his rap flow ability has not been hurt in the least.

“I’m feelin like we on a plane it must be how we takin off
You feelin like a lame when shorty with me, shorty take it off
Run up on me if you want you won’t have time to make a call
Give the burner to my dog he catch the case I break him off
Puttin mileage on my Pyrex, yeah we call that bakin off
Talkin fast, countin cash, take that pussy break them off
Never wear a rubber where I’m from we call that livin fast
CEO of Maybach Music but I need No Limit cash”

2 for 2 is a good sign but that’s still 2 out of 14 overall. There are a few plusses going for Zoe on “Don’t Feed Da Animals.” Not wasting time on an unnecessary intro or a bunch of stupid skits is one of them. Starting out with a hard hitting Kane Beatz track on “Untamed Gorilla” that showcases Zoe’s raspy delivery and punchlines with JC crooning the hook. Cameos are kept to less than 50% of the songs, which enables Zoe to establish himself as a star on the CD and not a guest on his own release. The guests are appropriately chosen to fit Zoe’s Dirty South fanbase as well, with Yung Chris appearing on “Watch Me” and both Gucci Mane and OJ Da Juiceman showing up on “Helluvalife.” While I find none of them to be as talented as Zoe they’re the sort of regionally popular and vocally similar artists that compliment him perfectly. At this point in his career Zoe doesn’t need to be doing songs with Fat Joe and Ice Cube to get over.

Obviously if there are plusses there are some minuses too. Gorilla Zoe and his producer Corporal try a little too hard to get over the “dumb” concept on “I’m Dumb.” The hyphy movement has already been there and done that, and with all due respect to the Bay Area that seems to have faded in popularity – so Zoe sounds late on this one. “If you’re hood and you know it clap your hands” is a little too nursery rhyme for me even though the minimalistic beat of “Hood Clap” is effective. “Talk Back” is far worse though, a crass ode to sexuality featuring newcomer Roxi Reynolds. It’s 2009 – can everybody stop trying to imitate Lil’ Kim and Trina now? If y’all want to talk about how great your pussy is then just do a spread for Playboy and let us see it – otherwise you’re talking the same shit the last bitch did. “Don’t Feed Da Animals” is a slight improvement over Gorilla Zoe’s debut, but his personality still tends to get lost in the mix and he sometimes seems to be a cariacature of Southern rap instead of one of its stars. Hopefully he can still afford those 28’s.