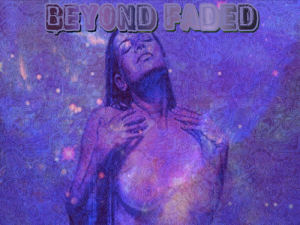 At 22 tracks and nearly 80 minutes long, “Beyond Faded” embodies the excesses prevalent in so many internet mixtapes, which is for all intents what this release from Drank and Dank is. As hustlers go this crew has been on their grind though, hitting me with a slew of leaked singles then following it up with a full-length download, so I feel like I’ve been gradually exposed to this content over a reasonable amount of time. Other people may look at the line-up and find it a little more intimidating though, but there’s no option to choose items a la carte – you’re all in for 180 MB of music if you click that cover and download their freebie.

“Beyond Faded” also embodies a typical internet mixtape in that it freely mixes well established names in the rap game with a slew of talent you’ve barely or never heard of, in an attempt to put the up-and-coming rappers on the same level as their peers. It’s not a promotional tactic you can hate on – it’s why UFC puts the flyweight title fight on before a main event with their most (in)famous champion Jon ‘Bones’ Jones. They want you to think of the 125 pounders and the 205 pounders in the same light – and they’re hoping that by mere association alone you’ll remember their names the next time and be more likely to buy a fight where Demetrious Johnson is the main event insted of Jones.

On paper there’s psychological validity to forming associations between main eventers and people who have never held the top spot before, but the market research proving whether it works or not is much more tenuous. What people will remember at the end of the day though is a great performance. Even if you do it at a smaller level where you don’t get a rub by being next to big stars, there are times it works that much better, because word of mouth can take you from an unknown to a superstar very quickly. In the days of things going viral thanks to the internet this has never been more true, but unfortunately this has also led to an unending series of mixtapes of dubious quality, as everybody hopes they can cash in and be the next artist to go viral and become household overnight.

Let’s break down the good, the bad, and the ugly of “Beyond Faded” on the basis of these competing theories. The good is that there are clearly some up-and-coming rappers with potential. Skooda Chose may be this album’s flyweight – his reputation isn’t heavy but the narrative flow of “Suicide” works. The production is a little dirty – okay it’s REALLY dirty and distorted – but his voice rises above it and makes you notice lines like “I’m pure dopeness/legalized euthanasia.” He’s the kind of guy you would give the rub to by pairing his song next to one like “Money” – an all-star line-up of 40 Glocc, Chamillionaire and OJ Da Juiceman (in truth Cham steals the show on it). The Track Dealers produced “We Still Hustlin” owes as much to its piano beak as Noe, Bilack or Shoota but it’s another worthwhile endeavor. If you’ll forgive the pun, there’s even something enjoyable about the folsky country sound of Folkz on “Side Door.” He reminds me of Paul Wall orLil’ Wyte in a good way. TipToe’s “Heart Made of Steel” is a winner too and has one of those Kurupt cameo raps that’s so bad it’s actually good.

Speaking of cameos, the bad is that some of these artists aren’t going to benefit from their associates. To be clear here you can’t always blame the new jack – Grandson is not going to get elevated by being with 2 Chainz just because Chainz isn’t any good to begin with. Bo Kane fairs marginally better using Gorilla Zoe for “Money On My Mind,” but in this case the unpolished production hurts the track to the point I don’t want to hear his slow talking flow for longer than necessary. “On My Job” has the same problem even though Trick Daddy and Young AJ seems like one of the most natural pairings of the whole release – the parts that the bottom beat drop out are what save it from being a total trainwreck.

The ugly is that quite frankly there’s no saving some of these songs, no matter whether they have a big name cameo appearance, nor if they are preceded or followed by tracks with one. Some of this shit is so bad you can’t elevate it by association with anything – it just drags down everything else. Jig Dolla might be a good pimp for an [adult swim] cartoon, but “Rollin Up” featuring Sun doesn’t make me take him more seriously than that. The “G2G Anthem” features a slew of people I’m not going to remember after this review, and repeatedly insists that “you know what it is” on the chorus. You’ll know too if you hear it – hot ass. Dutch Capital and KingPen Slim’s “Shooters” set out to combine the worst elements of Future, Gucci Mane, Kirko Bangz and T-Pain and achieved their goal easily. Even though Supreme Cuts & Haleek Maul’s “Ball” is only 76 seconds long, I still want it back.

So what is one to do with Drank and Dank’s “Beyond Faded” at the end of the day? You may not be able to pick and choose from their selection of cuts before you download it, but there’s no reason you can’t do so AFTER you do. My advice is to winnow this album down to the third of it that is either listenable, features artists who have some level of potential, or both. The scores below largely reflect that proposition, a one-third return on what is in fact a three-thirds investment of hard drive space, but as I said at the outset I do admire and respect D&D’s hustle and look forward to what they’ll do next. My only hope is that next time they’ll be more selective about who they chose to promote, and that the production will be better mastered to raise the overall quality of everyone involved.