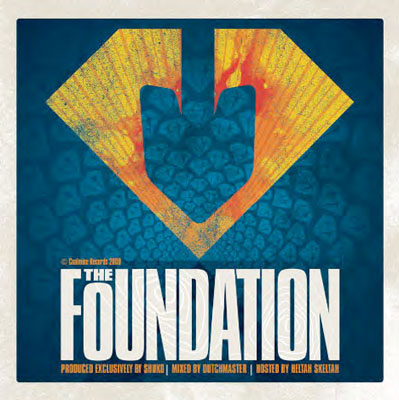 Despite all of these factors “The Foundation” reached out at me from the stack and said SPIN THIS. An all-out blitz of compelling factors caught my attention on this one. First is the fact the producer Shuko hails from Germany, and you don’t often see a Brooklyn-based record label promoting a musician from that far away. To up the ante Coalmine Records had Dutchmaster come in to spin and mix his tracks, and if that wasn’t enough the label went for broke by having HELTAH SKELTAHhost the mixtape. This one stands out. This is not just another run-of-the-mill mixtape from another wannabe producer who is looking to get on.

Shuko has a very interesting and largely East coast lineup of rappers on “The Foundation.” Some of the biggest names of hip-hop get down here, such as Talib Kweli & Rakim on the remix of “Getting Up Anthem,” Canibus & Chino XL on the pounding “Do This” and Heltah Skeltah themselves with DJ Revolution on “Midnight Madness.” Shuko must be more than “up-and-coming” to have these kind of connections, which suggests that for once an album’s press release may have UNDERSTATED how big their artist is.

Shuko doesn’t appear to have a swollen head though because he saves some of his best tracks for the lesser known rappers looking to shine. Skyzoo’s “Strong Out” reminds me of a Stoupe the Enemy of Mankind beat for all the right reason – strong drums, a hard rock attitude and beats perfectly synced to the rhymes. Born Unique blows up the spot with Bad Seed and Canayda on “Outta Ya’ Dome,” a high energy screamer with the ubiquitous sped-up R&B sample that somehow doesn’t seem played out in Shuko’s hands. Doujah Raze’s “Give it Up” in particular shows a dedication to the craft by both rapper and producer to make a song that makes an impact.

“And I’ve been going through these whole motions
This hammerhead shark alone in these cold oceans
Lookin for landmarks, it’s strange but you get the picture
Kinda hard to shake the image when descriptions fit ya
Why even try I’ll never (give it up)
Cause I’m too abusive, my body’s used to bruises
Screws is loose and my juices blew the fuses
Dedicatin my time to pussy, blues and booze an’
Shoulda been home writin music
I swear I need to (give it up)”

It’s rare in 2009 not to mention the current economic situation to find a compilation album that’s worth shelling out $15. In fact even a marginally acceptable mixtape is likely to end up heavily bootlegged for free all over the internet, just because “dime a dozen” is no longer accurate to describing how many are out there – it’s more like DIME A HUNDRED. Shuko stands out on “The Foundation” though. The rap roster on this compilation is diverse and highly enjoyable, from New York rappers that should’ve blown up like Shabaam Sahdeeq and R.A. the Rugged Man to ones like Big Noyd and Sean Price who made their name a long time ago. All of them seem equally relevant over Shuko’s beats, which are a combination of the best underground techniques known to work in ’09, and it does help that Dutchmaster comes in on the Technics to back him up. You may not know Shuko but you should, and after “The Foundation” his is a name you won’t soon forget.