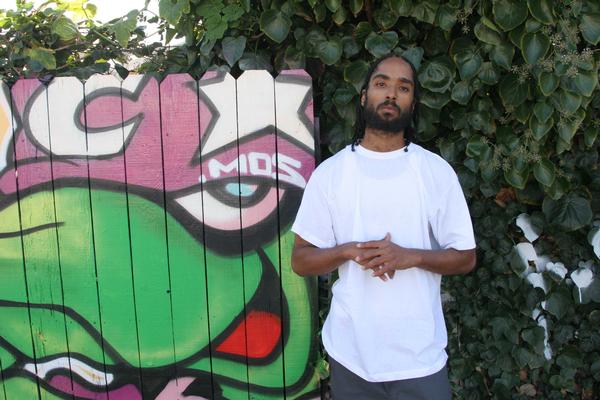 From having his senior year of high school filmed for a PBS documentary, to now being a teacher and emcee studying for his masters in education at Mills College, Unity Lewis’ life is one that has been continually filled with some truly amazing stories. In 1994, Unity, with his friend Klientel, co-founded The Napalm Clique, a crew of thirteen emcees spread out all over California. Two successful projects – “Revolution” and “Obama” – and fifteen years later, Unity is readying a solo release, Audio Veve, due to hit stores this summer. The first single will be “Gangster” with a b-side of “Let’s Ride” featuring stic.man from Dead Prez. This week RapReviews caught up with Unity to find out more about his work and his crew, as well as the wide variety of influences he had growing up, influences that ranged from gang life to yoga, and what event led PBS to want to document his final year of high school.

Adam Bernard: When you co-founded The Napalm Crew, what were some of the influences you had surrounding you?
Unity Lewis: At that time gang culture was prominent. The Chronic had just come out and everybody was into that kind of thing. All of my cousins were gang members, but they were from Sacramento. I would visit them in the summer and kick it and they were all like bloods. When I’d come back to LA it was predominantly crips, but we came together to do music. We rocked all the talent shows at the school. That’s how The Napalm Clique started. We just rolled together. Adventures happened. I remember at one point Klientel had disappeared, had moved out to The Valley, and he’s out there still. My friend Mad Bad is the grandson of Horace Tapscott, he went through all sorts of crazy shit with his gang life. He had to go to juvy for like two years.

AB: How did that affect both you and the group?
UL: That was at a point where I was like aiight, we’re all working on this Napalm Clique album together because I had brought people into the studio because my parents were musicians and knew musicians so they were kind of taking us in to nurture us and keep us off of the street and out of trouble. So we had begun this album, we’re paying studio time and everything and he had to go to jail and Klientel wasn’t really around, so I just kept holding it down with the album and finished it. It was called Fight. When my friend went to jail I kind of went back to my roots, I had a lot of history instilled in me about who I am and what my purpose here on earth is, which is my name, Unity, and during that period of time where I was lost with the gang culture and all that stuff, I always had my consciousness so I was able to not get into half of the shit that I could have gotten into and I also had elders around me protecting me, elders in the gang, elders in the community, elders in general, who were like you have talent, so just rap. I was in art classes and doing things like that. My grandma is like the leading black art historian in the country, her name is Dr. Samella Lewis, so I’m also pulling from that heritage.

AB: You have a lot going on in that background.
UL: Yeah, exactly, so at a certain point my purpose clicked in and I was like oh, I had to go through all this stuff in the street to be able to talk to my brothers and my sisters in the street and help them uplift and use their life to their fullest potential and to let them know that they can manifest, that they’re not trapped out here and that there’s more to life than killing each other. A lot kicked in for me because my mom was like a yogi and like a shaman and kind of like a mystic type of women; an herbalist and a healer and all this type of stuff. I was learning about the chakras and doing yoga with her at a very early age. All that stuff, that self-awareness, kind of kicked in at age 18 and that’s when I put out that album and labeled it on the back The Napalm Clique Fight for Freedom and used the red, black and green colors. I remember I got my album out of pressing the same day Let’s Get Free from Dead Prez came out. I didn’t even know that was gonna drop. I got that through my homeboy who said I should check it out. I heard them and I was like I gotta do an album with these cats. I gotta do some work with these cats because they were doing the east coast vibe of what I was doing, which was about don’t turn that gun on yourself, kind of on like a soldier level, trying to organize all the soldiers and get them on a self-awareness type of vibe.

AB: As an emcee who has a political focus, how do you feel political rap will change now that Obama’s in office?
UL: I think that it’s going to be more positive, that’s what I think, because people see hope and it’s obvious that there’s change because we’ve never had a president who was visibly black and the symbolism in that is enough to be able to make it so that a school teacher can go in and tell his little black students that yes, you can be the president one day and start instilling that. Future generations are going to grow up with that around them so they’re going to be able to have that confidence in them already that we didn’t really have coming up. We were like, the system is against us. We’re in the strange land with the strange man and the shit ain’t working. We’re frustrated and we want to burn some shit down. I grew up listening to a lot of early Ice Cube, I liked some of that Paris stuff, The Coup, but I also listened to a lot of street rap because that shit’s real and it was expressing the frustrations that we were feeling during the crack epidemic and then Rodney King and even now just because Barack Obama is in office it’s really up to us as a people to change. Barack Obama ain’t gonna change everything for us because cops just shot Oscar Grant in his back while he was handcuffed here in Oakland and that shit’s worse than the Rodney King thing. I’m surprised there wasn’t a full scale riot, or that the National Guard didn’t have to come out for that shit. I don’t know what that is, maybe it’s because people are feeling like violence isn’t necessarily the way to create change anymore and maybe we can create change on higher levels. AB: A lot of artists who look to be political end up also being either boring or preachy. How are you looking to sidestep those gigantic potholes?
UL: On the “Obama” stuff and the “Revolution” stuff, that’s just my social responsibility. That’s like me paying rent on earth. Somebody said activism is my rent on planet earth. So that’s just stuff that I’m doing because I have to do that, but I’m a balanced person. With this new single that’s coming out, “Gangster,” that’s a whole different side that the public hasn’t really seen on a large scale. What I’m hoping is gonna happen is that people will be able to see how all of it is relevant and all of it is related. I don’t want to get stuck in a box as a musician. I want to have that freedom to do whatever I want because it’s all what I believe in and it’s all coming from my heart and it’s all real.

AB: What do you think of some of the mainstream, popular, rappers of today?
UL: They’re almost rapping for a different generation. Say somebody like Soulja Boy, or somebody like that, this is a younger generation of Hip-Hop and I really can’t understand all of it {laughs}, but because I teach I’m around it a lot and I’m learning it and I think that as elders we really need to take the time to stop and learn from the youth because they have something to offer, too, in all their youthfulness and their vibrant energy. I can sit back and listen to that because I know the purpose of a Soulja Boy song is for me to dance. I’m not listening for strong lyrical content or a political message. I’m not always in political mode, sometimes I just feel like loving, sometimes I just feel like making something abstract, and I want to be able to express all those different sides.

AB: It’s interesting you mention teaching because your video for “Revolution” is set in a classroom.
UL: Because it’s all about teaching and education. That’s what we do out here in Oakland. K.E.V., that dude who does the first verse, is a teacher out here in Oakland. He teaches Hip-Hop and he’s also like a mentor and a tutor. I’ve been teaching Hip-Hop out here for like eight years. I’m one of the first to teach it as an elective, but in the public schools, so it’s actually part of the public school curriculum. We started this huge Hip-Hop mural workshop program where I teach at Far West High School. It’s a beautiful gallery of Hip-Hop art when you go there.

AB: Finally, speaking of education, you had quite the spot of local fame when PBS asked you to document your senior year in high school. Was there any special reason they chose you?
UL: They were interested in my story. I organized what was our school’s version of the Million Man March where we had pulled all the Black males out of class for the day because they had just had a riot with the Mexicans. There was this Black and Brown tension going on in our school. It was like forty people fighting with like chains and stuff and me and my homies were in the middle of it trying to break it up because we had a crew that was called The Revolutionaries and our whole mission was to stop gang conflict. So I was doing gang conflict resolution and that kind of stuff in my senior year and all the gangs respected me. We organized the march and it was a smash. They got to film that. Originally I was gonna do the whole soundtrack for them with kids from the school, but it was too chaotic because a lot of kids were not professional enough to handle the responsibility. What ended up happening was I got to do a song in Chick Corea’s studio with Ozomatli and Oscar Brown Jr. It was for this song called “Brother Where Are You?” That got erased, but I ended up meeting Oscar Brown Jr. and Wil-Dog from Ozomatli through that experience and I ended up doing some other stuff with Oscar Brown Jr. later. Oscar Brown Jr., I would even say before Last Poets and Lost Prophets, you had Oscar Brown Jr., back in the 50’s, doing jazz poetry. That was a great experience because I got to go on stage at my school with Ozomatli and just rock the school.