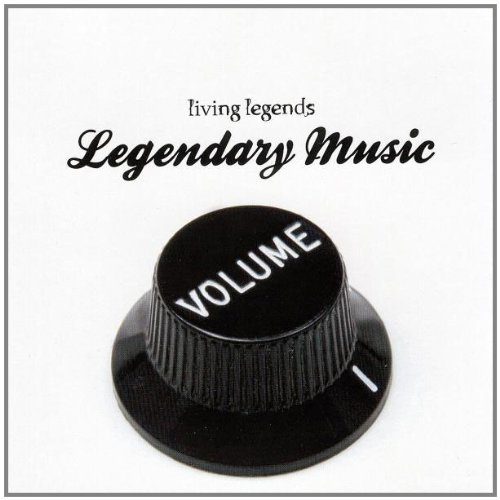 “Sometimes it’s better just to tell you like it is in a song,” offers Living Legends member Luckyiam at the beginning of “Another Day,” and while this particular song may be meant to tell a lover ‘like it is,’ the eight men that make up this crew have been expressing themselves in song form well beyond its ten years of existence, building their careers from the ground up in collectives such as Oakland’s Mystik Journeymen and LA’s Log Cabin Crew. These days Murs may be the most prominent member due to his collaboration projects with Atmosphere’s Slug and Little Brother’s 9th Wonder, but in indie circles every single name in the Living Legends line-up rings bells.

The titles of the collective’s previous full-lengths (“Almost Famous,” “Crappy Old Shit,” “Creative Differences,” “Classic”) alternatively expressing doubt and confidence, the Living Legends seem to be torn between the respect and recognition they command, and the lack of discipline inherent in any crew that size. Their output is impressive, but the realm within which they are considered to live up to their name remains relatively small. Whether “Legendary Music Vol. 1” will change that or not remains to be seen,, but like 2003’s collection of early works “Crappy Old Shit,” it should not be judged as a coherent, real-time team effort, as it (with the exception of 3MG’s “2010,” which is billed as a previously unreleased exclusive) previews tracks from upcoming solo ventures (or, in the case of Scarub’s “One for the Road Vol. 1,” a currently available release).

In that regard “Legendary Music Vol. 1” very much reflects the disparate leanings of its members. With the soulful “Love You Like This” Murs continues to be a sucker for love. Neither are Luckyiam and Bicasso shy about the fact that they love the ladies, or as the former puts it, belong to the “men who know the worth of roses on this Earth.” Lucky’s “Another Day” with One Block Radius’ Marty James on the hook and Bean One on the beat is a flute- and guitar-driven ditty with definite pop appeal. Bicasso’s “She’s the One” is an indie version of “Change Clothes,” a nod to stylish chicks with Bicasso taking care of everything from the sung hook to the half-bubbling, half-stomping beat. Rounding off the romancing is Scarub’s persistent “Close to You”:

“So much for no kissin’ on the first date
First base I slid in, her face grinnin’
Her taste for satin and the linen
got us strippin’ in this bitch from the den up
to the stairs gettin’ hot as hell’s kitchen
Second base I was given, all factual, no fiction
from the kissin’ to the lickin’
If your heartbeat tickin’ then you too sex-driven
And we strippin’ past third, in other words
we homerunnin’, finally sinnin'”

The rest of the compilation thematically revolves around beats, rhymes and life, the rappers to varying degrees remaining vague or getting specific about the latter. Aesop gets overshadowed by a not particularly dominant Slug on the opening “Moving at the Speed of Life,” whose simple, circusy beat undermines his “Laughin’ at you cartoons” line. Early into the album, you’re already reminded of a possible better alternative, in this case Xzibit’s “At the Speed of Life.” Sunspot Jonz sounds somewhat bitter on “Purple Kush,” alienating his potential audience with “I don’t give a fuck who’s listenin’ or who ain’t listenin’.” You’ll have to get into the optimistic, organ-driven groove courtesy of Wiz and follow Jonz to understand where he’s coming from and why he speaks for all Legends when he says, “We ain’t afraid to be ourselves regardless what they tell us.”

One guy who certainly isn’t afraid to be himself is The Grouch, who on “Artsy” chooses not to contrast with complete opposites, but with people he’s more likely to get mixed up with:

What at first reads like a silly one-upmanship between alternative types, turns out to be the manifesto of someone who has outgrown comparisons: “I recycle too / I’m kinda like you / I just look cleaner / grown demeanor.” Beneath its humorous note, “Artsy” presents The Grouch as a complete individual:

“Most days I’m earthy, stay grounded
Often it’s a paper chase, I’m well rounded
[…]
Do it for the love and release it commercially
like a blockbuster startin’ a Sundance
Can’t stop, man, you only get one chance”

More words of advice come courtesy of Luckyiam, who on the wild-west-flavored, Dirt Nasty-produced, “Rap, Rap, Rap” doesn’t hide his scepticism about the entrepreneurial opportunities in the oversaturated market that is underground rap, arguing, “Emo to thug hop, ain’t no fast routes / Big labels find it hard to make money / How you think you ’bout to blow off this underground, dummy?” Speaking from experience, he continues, “It’s the 10th year anniversary of my bunch / but I’m thinkin’ that my rent’s due the end of the month.”

The Living Legends philosophy is further explained by Bicasso on “Think Big”:

“What we really need is some more cats like me
Spend a day in my shoes, you might just agree
They got lava on the in-sole and ice in the heel
Kept the toe made of steel to keep it blue-collar-real
I got my people’s minds made up like: Look, we gon’ eat
Put in work like the Bay Bridge and stay to the streets
But not like on the grind or posted up on the block
More like self-determination, so less niggas gettin’ shot”

“Think Big” deserves additional mention for its musical background, as DJ Fresh comes up with a futuristic vision of vintage West Coast funk like sending Daz, Battlecat and One Drop Scott on a space trip. The short showcase comes to an end with “Remember Who You Are,” where pensive piano touches perfectly compliment The Grouch & Eligh’s deeply probing, meditative musings. For only occasional listeners who may also remember these guys for less compelling efforts (not everybody can be a die-hard fan), the expertise this crew has accumulated over the years becomes evident on this closing track. The specially priced “Legendary Music Vol. 1” is not just a teaser for those who can’t wait, it’s also an artistic statement to the effect that even individually the Living Legends easily form a collective.