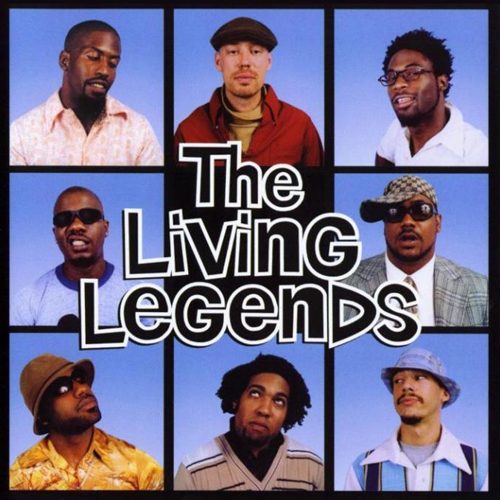 Even if you’ve never heard an entire album from the Living Legends crew (and they have more than a few) you probably know at least one MC from their vast extended family. The brassy Bicasso, the gritty gabster The Grouch, the outer space tripping raps of Sunspot Jonz and the underground icon MURS are just a few of the eight man crew, who have a very large extended family too. Suffice it to say if you had to draw a family tree extending through West coast rap music their roots run deep and branches spread out far and wide. The Legends themselves shuffle their line-up and form different combinations on albums, one of my favorites being the Mystik Journeymen, who never cease to amaze with their lyrical and musical displays that really seem to be on that next shit.

Needless to say the chance to cop a new Legends album, the first on their new Legendary Music label, was something I anticipated heavily. Needless to say this album does not dissapoint. With a sly “Eight is Enough” look on their cover, this large Living crew exploits the concept on the opening title track. Over an Eligh beat, each member says that although we might be fam, that doesn’t mean we have to fake getting along all of the time. Still there’s nothing but love here, as each and every member gets their time to shine. The hilariously old school introduction to “Addicted” sets up The CMA (another MJ style LL combo) to bust about surfing for net porn. Scarub’s self-produced “Time to Ride” is as hella West as it gets, sounding like a bugged out mixture of Aceyalone and Saafir the Saucee Nomad. Sunspot and Eligh bless the latter’s beat with the detritus that falls out of disjointed thoughts on the mellow “Days Go By” that includes these musings on a rap career:

“Damn, doin shows for no cash
And some skank-ass female, that you hope flash
In between the hip-hop bash, sausage party bash
Yo I hardly saw females at a show, back in the day
Now you see a few mo’, yo but not enough
Yo it’s tough bein underground
When all the finest girls is jockin in yo’ town whack shit like Ma$e
Or Miami bass, booty all in your face
in the videos, sometimes yo, I gotta face it
I like some of it, yo and I hate some of it
But yo how do I fit into the picture without sellin out?
Cause I’m never sellin out, but my records ain’t sellin out
then who’s really sellin out?”

Clearly the Legends are hip-hop artists who put a lot of thought into their beats and rhymes. Therefore it’s hard not to find yourself pulled into the fresh sounds and rhymes of the Grouch produced “Damn it Feels Good,” the uptempo Hieroglyphics style boombastic attack of Asop’s “Awakening” (with the ill punchline “boy you’re bout as hard as wet cotton”), and Bicasso’s self-produced “Get it Your Soul” where he brashly states “I use the same kicks, the same ol’ snares, and I don’t care what you do with the rest.” There are plenty of other solo tracks too, like The Grouch’s “No Strings,” Sunspot’s “It Might be You,” and MURS triple-time rap “Real Slow the Fast Way.” The collaborations show just how tight the crew is though on experimental songs like “Whatizit?” and calming melodies like the layered instrumentation of “Hold Your Own.” There are so many different sounds to the Living Legends crew that if you don’t like one, you’re almost sure to hit upon something you do in the next track.

The surprising part is that things don’t really come to an end after almost 80 minutes worth of music on “Creative Differences.” This album comes with a “LL 101” bonus disc that features some of the greatest songs from their catalogue. I was hella impressed that the very first track on this bonus disc, which is ITSELF almost 80 minutes long, was the classic song “Voices” from the Mystik Journeymen album “Worldwide Underground.” Why? Because aside from being one of my all-time favorite tracks from their massive crew collection, it’s one I was so enamored with that I personally typed up the lyrics years ago for the OHHLA archive. Peep the closing verse from The Grouch:

“Let’s get literal it’s me and my team, I got a dream
(“He’s a living legend..”) and a clean way to achieve it
I conceived it myself, with a little bit of help, from my friends
Made amends with my soul, now I’m ready to begin
First ingredient is dope shit, and fool we already wrote it
Mix up with the motives now we’re forming perfect batter
Had a vision it would burn, if I measured too precisely
I add a pinch here and, there if the spice be right
We might prepare this feast for many thousands
So eat when you’re aroused and enjoy — Legendary bitch!”

That for me says it all. One disc of new Legends material alone might be enough, but by including a veritable “greatest hits” disc of the family along with it, this album might easily be the single biggest bargain at under $15 you’ll see on store shelves all year long. Even if you were only a fan of one of the many different members of the group, give the Living Legends as a whole a try. They may have their “Creative Differences” from time to time but they all have a common goal to create the best hip-hop possible, and it shows.