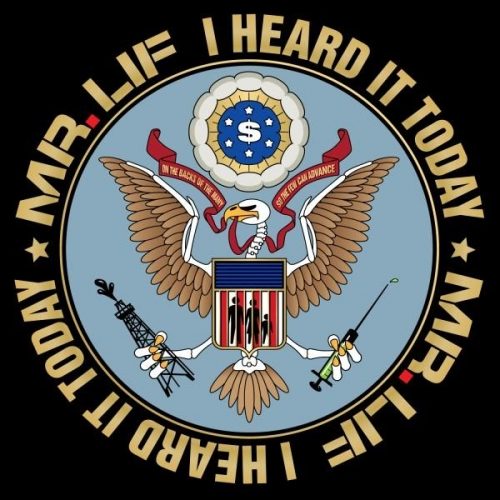 I’ve been a reluctant admirer of Mr. Lif’s for about eight years now. Largely due to a lack of vocal enthusiasm shown on “Enters the Colossus” almost a decade ago, I judged Lif to be a highly intelligent rapper cursed with a highly boring delivery. Despite my better efforts to peg him as an underground MC to not get excited about, Lif has managed to win me over anyway with singles and cameo appearances on various projects. The watershed moment was the release of “Black Dialogue” by The Perceptionists, an epic Boston all-star opus featuring Lif and Akrobatik on lyrics and Fakts One on the boards. The album literally changed MY perception of Mr. Lif, as he went from “boring monotone indie rapper” to “unconventional rap lyricist with insightful lyrics.” Unfortunately for Lif this also created the unintended perception for me that he functions better in a group than as a soloist, which is why I haven’t gone out of my way to pick up every joint he drops. With a few extra bucks in my pocket I might pick up a Lif album, think “hmmm” for a few seconds and put it down. The $15.99 price point doesn’t help as Lif usually winds up on small imprints you can only find at small retailers. In short, Lif intrigues me as an artist but not usually enough to spend hard-earned money on his solo albums. I strongly suspect outside of a die-hard New England following I’m not the only rap head who feels that way.

“I Heard it Today” is another chance for this Perceptionist to change my view of his brand of hip-hop. “Welcome to the World” is a strong start, as the introduction reminds us that just because government has a new face it doesn’t mean the same old shit isn’t going down. Batsauce has a ridiculous name but his guitar rock and bass melody suits the anarchistic lyrical delivery of Lif perfectly.

“We break into this place, end up in jail
Incarceration’s gonna make the wealthy wealthier still
He peeped me through the blunt smoke without a complaint
Out of respect for my knowledge yo he showed some restraint
We’re the earth inheritors, representin all areas
You spend trillions to control what we think – you’re scared of us
Y’all unworthy to serve we the people
You profit off of death and you manifest evil”

The strength of “I Heard it Today” lies in the fact Lif has created a thematic album, and that theme begins on the album’s cover with an eagle mocking the Presidential Seal. Instead of arrows and an olive branch, this vulturistic eagle of evil grasps a hypodermic needle and an oil derrick with an uncapped gusher in the other. Lif portrays a conspiracy between the government, the media and law enforcement to keep American citizens of all races blind, deaf and dumb. Conspiracy theorists will love it, the more levelheaded may find it reactionary Illumanti style scare-mongering, and the rest will simply take interest in Lif’s well articulated point of view. At times it seems to flow almost seamlessly from one track to the next, with “What About Us?” taking Lif’s “we the people” refrain and continuing right on with a new Batsauce beat and cuts by P Locke. At other times the concerns of the world get put on hold for a minute for collabo’ with artists like Bahamadia on “Breathe,” a track where Lif himself notes he is “often underrated [and] overlooked because the market’s oversaturated.” True. Even though this might seem to break the album’s theme, it’s soon clear on the “Police Brutality” skit and ensuing “Gun Fight” that Lif’s lyrical mind has proven too dangerous to the powers that be.

“Cops ain’t sorry, to them it’s more like a safari
They’re viewing us as three-fifths human, so their guns boomin
Death is looming, ain’t no punishment pursuing
Them cops got off scot free, it doesn’t shock me
Until they use their tazer to shock me
They use ‘Freeze Plus’ to seize us dogs and leave us
in dark alleys, protest they beat you at rallies
[…]
This nation is a plantation
The government is slavemaster, police are trained to gather slaves faster”

Mr. Lif isn’t afraid to turn his eye inward as well as outward, using songs like “Hatred” to address issues of self-loathing in his own community. “Head High” may be the most telling of the tracks, a P Locke track that Lif says was inspired by the controversy about Jeremiah Wright during Barack Obama’s campaign, which he describes as “the perfect trap to turn the ‘Change’ campaign backwards.” It seems that even with his natural distrust of the government, Lif still found some degree of hope and inspiration in Obama’s run to the White House, only to see the controversy cause him pain. “It hurts that even our most prestigious leaders/can not shun what those centuries of hatred have done.” The self-aware Lif even wryly notes that the very people he’s talking about in his song are the least likely to hear him or this album after its release.

The one thing that prevents “I Heard it Today” from being more of an epic cinematic masterpiece is the sometimes scattershot production choices. While the stripped down boom bap rap beats Edan provides on “Collapse the Walls” suits Lif’s pronunciation and drawl perfectly, the Willie Evans Jr. beat on the title track is an electronic melody searching in vain for some structure to bond with only to break down into non-headnod noise. Lif’s songs vary wildly between these two extremes, from the dopeness of the dark and dank “Folklore” featuring Dumbtron and Vinnie Paz to the echoing synths of “Dawn” sounding like Lif is trying to cross the Game Grid of “Tron.” It’s laudable (and affordable) that Lif would choose to work with underground producers like P Locke and Headnodic, but it also makes one ponder how much stronger Lif’s theme would have come across with beats from Alchemist, Fakts One and Nottz. “I Heard it Today” makes me a less reluctant Lif fan since I’ve come to terms with his vocal style, but I still yearn for the collaborative efforts of Perceptionist days gone by which had incredible rhymes AND incredible beats all at the same time.