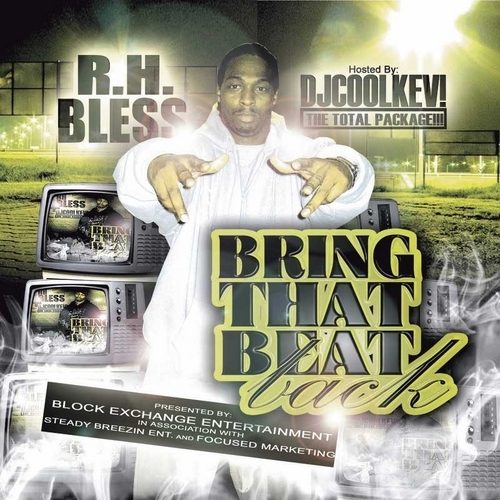 R.H. Bless :: Bring That Beat Back

From the jump off R.H. Bless has three things going for him over most rappers I’ve never heard of – a professional Blee) but R.H. Bless decided to go OLD SCHOOL on his debut and bring back familiar favorites from hip-hop’s golden age. Skeptical readers are no doubt concerned that Bless might not be worthy to revisit these classics, but the opener “Still No Half-Stepping” blew me away. R.H. pulls off an incredible trick here – he manages to imitate Big Daddy Kane without mocking him, still sound original with his own material, AND bust off some rapid-fire rhymes that even his fellow Brooklynite Kane would be impressed by.

“Get it? What I deliver’s authentic, the raw pure form that’s vintage
The way legends intend it, the true essence of living
Nothing less than miraculous how I bless it so accurate
Took it back like an acrobat on this track so immaculate
[…]
The R.H. B-L-E-S-S
In God’s great beam I gleam amongst the best in every breath
You’ve never seen or heard anyone come adjacent to my realm
I stand alone at the helm, no one is parallel”

HOLY, SHIT. The only bad thing I can say about Bless on this track is, to quote another old school hip-hop classic, SLOW DOWN BABY. Bless is gifted with an incredibly quick tongue and a very sharp knack for putting words together, but even so he gets going so fast at times on this tribute that syllables get lost in translation. Thankfully he slows it down a bit for “So What You Saying Now,” a rap tribute that GZA could appreciate for being half short and twice strong, clocking in at 2:21 as compared to the opener’s 4:57.

“The employee of the year, yeah I’m still at work
Never take time off, stay on my grind ’til the dirt
Due to the fact that you slack and left back
I gotta stay ahead of the pack so push dat
Best believe it, R.H. Bless bringin hip-hop back
{*cuts and scratches*} Yo
I’m the hip-hopper, Timbs and hoodie rocker
Down with Block Exchange, Empire the show-stoppers”

Bless wrecks, the track destroys, you’re left nodding your head so yo kill the noise. The mixtape is hosted by DJ Cool Kev, who plays a very minor and unannoying role, throwing in an occasional word or two to big up Bless. For those who don’t recognize the songs that Bless is paying homage to the mixtape actually includes HELPFUL liner notes, which is a rarity amongst most slimline CD releases, so you can see who did the original in each case. Bless runs the gamut of artists here from the well known to obscure, from the mainstream to the hardcore, showing just how much of a hip-hop head he is. Kid N Play get some love on “Up in Here Like Yeah,” the much slept-on Stezo is paid tribute on “It’s My Turn,” everybody’s favorite Overweight Lover gets his due on “Girls Love Me” and one of Bless’ best homage tracks is “Boys Come and Get You” in tribute to KRS-One. While Bless is not a vocal rap impersonator of The Last Emperor’s stature, you can feel Bless getting into the STYLE of the rappers he pays homage to, flowing at a tempo and vocal tone that’s similar enough to be familiar. That’s a little shocking in some cases, considering he tributes some classic b-girl rappers like Queen Latifah on “Glad to See Another Day,” but Bless is a talented enough cat to pull it off.

My professional policy with mixtapes is not to grade on beats since they’re borrowed and not original, so despite being a far above average rapper with a much more unique concept for his release, R.H. Bless gets the “fair is fair” treatment here with an n/a score for Music Vibes. PERSONALLY I’d give Bless and Cool Kev the highest of marks for rocking old school beats for everybody from Brand Nubian to Kwame to Rakim, with only a minor deduction for leaving out the West coast in his tributes. If you’re going to go the old school route with a “Bring That Beat Back” mixtape, why wouldn’t you rock a few tracks from Ice-T, N.W.A and Ice Cube too? All is forgiven though since Bless has far more talent on the mic than can be shown in the short span of 14 tracks. Right now I’d say he’s a bit raw and unpolished, a diamond in the rough, with a clear ability to shine once he settles down a bit and links up with the right producer(s). You’ll be hearing from R.H. Bless again.