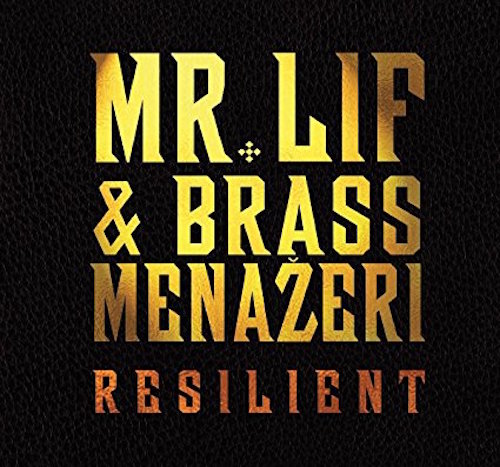 Boston rapper Mr. Lif came back with a vengeance in 2015 after taking several years off from releasing music. He’s been on a roll since then; “Resilient” marks his fourth release in two years. It’s also the most unique collaboration he’s been involved with, pairing his rhymes with the San Francisco-based Balkan brass band Brass Menazeri. So here’s the question: is it merely “interesting,” or is it actually good?

A quick geography lesson: The Balkans refer to the countries around the Balkan mountains (or Stara Planina, to use the Bulgarian and Serbian name), which stretch from the Adriatic to the Black Sea. These countries have one foot in Europe and one foot in the Middle East, having been part of the Ottoman Empire. The music of the Brass Menazeri is based on folk music developed by the Rom people, many of whom make their home in the Balkan countries, and whose music has a distinctly Middle Eastern feel. I spent some time in Bulgaria and you would hear this music blasting out of apartment buildings and cars at all hours of the night. It’s both celebratory and sad, wailing horns and wailing singing. While many countries have melded it with pop music (chalga in Bulgaria and turbofolk in Serbia), “Resilient” is the first time I’ve heard it mixed with hip-hop.

The seeds of this album were planted when Lif and the Brass Menazeri played together at the 2010 Seattle Folk Festival. It took them several years of recording and mixing to get the ten songs that make up “Resilient,” eight of which feature Lif rapping. Translating Balkan music into hip-hop is no easy task. The rhythms are different for one, and Balkan music doesn’t allow a lot of space for a rapper. It’s built on loud, fast-paced instruments, so it isn’t the kind of music that fits easily with rapping.

The album works best when Brass Menazeri is more in the background rather than in the foreground, as illustrated by opening track “Rebirth.” The song starts off with both Lif and Brass Menazeri competing for air, and it’s borderline cacophonous. Then the band steps back so it’s just the low horns and drums with Lif rapping, and it starts to sound more like a rap song. “Crypt of the Lost Styles” sees the band being sonically manipulated to be almost like a sample that Lif is rapping on, complete with machine-generated beats. Several other tracks follow this pattern of having the band be heavily mixed and manipulated. They also get a chance to play unencumbered and unrestrained, particularly on the two tracks they do without Lif, “Doppio Macchiato” and “Burning Up.”

I always think of Mr. Lif as being a “serious” rapper, so it was a pleasant surprise to hear him letting loose and having fun on “Resilient.” His rapping here is a bit less intense than what I generally expect from him. He has his serious moments, but a lot of this is more breezy than what you might expect from a dude whose lyrics often have “dystopian” as a descriptor.

There is a lot to like about “Resilient,” including Lif’s confident flow, the novelty of a brass band backing a rapper, and the way Lif and the band sometimes lock in together. I appreciated how outside the usual offerings this was. That said, since all the songs are built around a Balkan brass band, they all sound similar. Also, Balkan brass music, while at times beautiful, can also be a little hard on the ears. Maybe I was just kept up late at night be revelers blasting chalga one time too many during my stint in Eastern Europe. (Those horns are really loud, especially at three in the morning when you are trying to sleep and have to get up at 6am to work!) Whatever the reason, I often found myself really into this for the first couple of songs, and then feeling like I’d had enough. Even with that criticism, I recommend listening to “Resilient” both because it is unlike any other hip-hop album I’ve ever heard and because it mostly works. There is something beautiful and empowering in hearing music that comes from the Rom people, who are the most marginalized population in Europe, mixed with hip-hop, which is music that came from the most marginalized populations in the U.S. It speaks to the resiliency of these groups, and of the common bonds that unite us. It is also pretty banging in its own unique way.