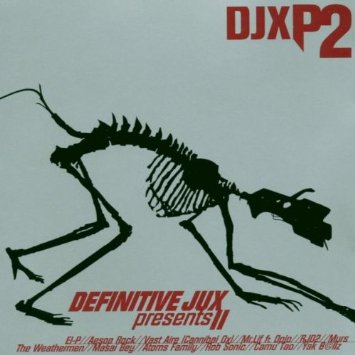 “Definitive Jux Presents Vol. 2” lends itself to comparisons with Rawkus Records’ “Soundbombing” series, on which upcoming singles are also mixed with big name exclusives. However, the Rawkus mixtapes employed the mixing mastery of Evil Dee of the Beatminers, and J-Rocc and Babu of the Beat Junkies, contributing a sense of continuity to the albums. These sounded like legitimate releases and bang even today, years later. Conversely, “Vol. 2” sounds like half-assed hype for decent singles that don’t need the help, bolstered by throwaway tracks from normally incredible rappers.

“Def Jux Presents Vol. 1” dropped when the label was still relatively small. The artists were tight-knit and label CEO El-P, formally of Company Flow, laced most of the tracks with his trademark sound. In the past year, the label has diversified somewhat, picking up artists from the lyrically intense Atoms Family crew (which spawned Cannibal Ox) and the rowdy Weathermen. A variety of producers handle the boards. WIth so many minds from so many directions combining on one album, the results are less than spectacular.

Most of what is here has been previously or recently released as the A-side of a Definitive Jux single. Unfortunately, the exclusive tracks here from big names fall flat. Aesop Rock’s “Dead Pan” is too clunky, and RJD2 has done more interesting work than “I really Like Your Def Jux Baby Tee.” Newcomers to the label don’t introduce themselves particularly well either. Rob Sonic’s “F.U. for Failure Ugly” is entirely forgettable, and “Mic Molest” by the Atoms Fam is annoying at best.

There is some good work here. El-P’s Swiftian satire, “Stepfather Factory” is brilliant and heartfelt, a good counterpart to Camu Tao’s ass-whooping “Hold the Floor.” Where Rob Sonic failed on the bizarre tip, Masai Bey succeeds with his entire lack of a flow on “Paper Mache.” And, while Mr. Lif and Y@k Ballz don’t bring the next shit like the rest of their label-mates, Lif’s team-up with Souls of Mischeif, “Fulcrum (Insight rmx)” and Y@k’s “Freak Show” are both ill in their own way. Unfortunately, all of these tracks are available elsewhere, and all have b-sides that are worth dropping the dough for. In the end, Def Jux effectively shooting themselves in the foot with this compilation, by attracting sales away from many singles that were easily dope enough to stand on their own.