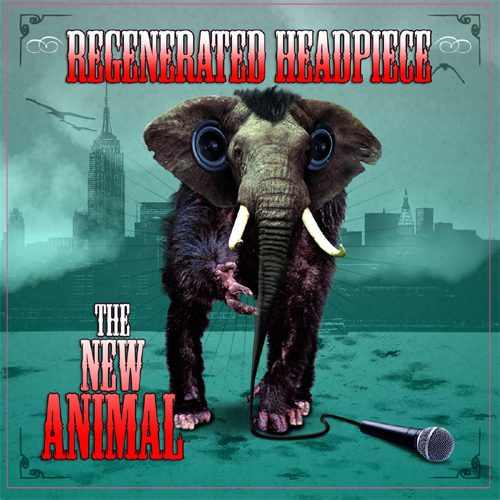 Innovation is what keeps music continuously thriving as reflected by new artists who attempt to be more unique and abstract than the next. The direction that New York City’s Regenerated Headpiece is headed towards is exactly that as they construct a style that is definitely all their own. Comprised of five integral members, Phon-X, Shred Lexicon, DJ Exfyl, DJ Sykopath, and Old Yist, the group comes together to create an unfamiliar sound. Regenerated Headpiece’s past albums of “Rat Race Vacation” and “Dogfight” have been called many things beyond the norm and have been compared to various artists such as A Tribe Called Quest as well as reaching to the opposite spectrum of ‘Weird’ Al Yankovic. They have gained popularity in the UK and have shared stages with acts such as Dilated Peoples, Mixmaster Mike, and Blackalicious. Apparently, this wasn’t enough as Regenerated Headpiece is back with their third installation of “The New Animal” featuring collaboration from long time supporter, Chuck D of Public Enemy.

While Regenerated Headpiece head in a somewhat different direction with their newest album “The New Animal,” an increased amount of seriousness comes to light as the group still maintains their character found in their previous works. Humor, comical antics, and conceptual thinking proved to be the core of “Rat Race” and “Dogfight” and while revamping their style, Regenerated Headpiece displays their style in a slightly different manner. With a fusion of abstract and classic hip hop, Regenerated Headpiece’s distinguishing sounds become apparent as soon as “The Eye Opener” introduction commences. Electronic instrumentals and traditional scratching intertwine as the layers of sounds unleash airplane noises and ethereal voices. “Trinity” soon follows as the group illustrates the outcome of one’s decisions in an unjust world as they say:

“Reality, perception, infinity
The trinity of consciousness
Give me the truth, but not the consequence
Each decision that you make has a direct effect on the path your life will take
For each mistake we pay the price
Before the President’s mistake
We have to sacrifice our civil rights
It isn’t right
Let me express my dissent
About the state of the world and the role of this government
It’s high time we underwent some serious reform
‘Cause life in a police state shouldn’t be the norm
It’s the land of the free, but not at the airport
What do they think I packed a nine in my Jansport?”

The album’s title track features Chuck D on this funk driven track laced with violins and drums as they inspire with the idea of the constant degradation to the world both environmentally and politically as corporations and the government seem to have taken over. “The New Animal” is almost unveiled as a metaphor for the new human race that is fixated on materialistic objects rather than the somewhat clichÃ©d idea of focusing on making the world an improved place.

Regenerated Headpiece puts aside all seriousness as they continue where they once left off with their absurdity, humor, and wittiness. “Inside the Museums” is an absorbing track that leads you into a museum with a feeling of being part of the artwork present. The group welcomes you into a realm of imagination as they describe in detail different pieces of art while illustrating a story that each tells. They describe the museum as a place “Where the geniuses sleep/How can emcees compete?/Language is obsolete.” In an interesting twist, Regenerated Headpiece pushes their talents aside to honor artists instead. Also, “Who is Dr. Cube?” is another out of the ordinary track that depicts a fictional character, Dr. Cube, while uncovering the depths of his life. This peculiar story begins with the idea that Dr. Cube was born in laboratory and made into a “home grown genius” by a genetic scientist while slowly evolving into a “misanthropic mad scientist invasion.” Perhaps a connection to modern day scientific progression that is out of hands?

The fact of the matter is that Regenerated Headpiece has some definite unmatched talent. Their variety in sound and word play is continuous while their sense of abstract art flourishes throughout their music. However, one can easily find themselves lost at times, without a clue as to where a track is headed. Even with repeated attempts and listening repetitively to fully comprehend the core to certain tracks, it was still difficult to get the gist of the subject matter. The focus and fluidity seemed to be lacking at times and in turn, confuses the listener into a state of frustration. With this in mind, I still can’t complain about the entertainment value of Regenerated Headpiece’s “The New Animal” as they were even slick enough to slip in an eight minute homage, if you will, to the female genitalia. It doesn’t get better than that.