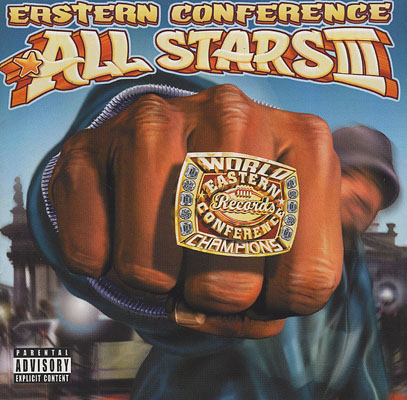 With a cornucopia of solid releases under their belt, the Eastern Conference’s third compilation album couldn’t have come at a better time. Rapidly emerging as one of the elite independent hip hop labels, Eastern Conference has passed the stage where they’re out to claim recognition, and have quickly risen into the realm of defending their supremacy. This album serves the purpose of furthering the already blossoming careers of The High & Mighty, Copywrite and Cage, and hopefully hyping you up for upcoming releases from Tame One, Nighthawks and the Weathermen. It succeeds in some ways, and falls short in others.

After opening up with a hard hitting Tame One track, the album shifts into high gear early with Copywrite’s first performance. “Won’t Stop” is just another example of the dynamic chemistry between Megahertz’s paramount members. This track is a prime example of why Copy’s formulaic flow is becoming one of the more recognizable ones in underground hip hop. Because it’s dope as hell! This song, as well as “Jeah,” are enough to leave shreds of hope that Copy will someday tap the full potential within him, and raise the bar for not only his crew, but for the hip hop community in general. Meanwhile, he’ll just continue to enrage the naysayers with his cocky attitude and audacious rhymes:

“Crying how I repeat to many lines in rhymes
That only means you peep to many rhymes of mine
And the lines are mine, so eat a dick
I ain’t at your nine to five, telling you how to supersize the fries”

The Weathermen collaborations will have fans in heavy anticipation of a full length. Though I’ve lost count of how many members are actually in the Weathermen crew, “5 Left in the Clip” is a good representation of the proficiency of the group. “Gut You,” though significantly weaker (mostly because of the chorus), also has enough lyrical firepower in the verses to hold interest. Similarly, the Nighthawks self-titled track prefaces their recently released album, for those who have yet to purchase. The lyrical vigilantes ride a bouncy beat, spitting their usual substance. Camu and Cage work well together, and it shows on this song, as they effortlessly pass a rhyme back and forth.

The single gem on this album is a more subtle Nighthawks creation, the Camu Tao produced “Ballad of Worms,” which shows an emotional (for his standards) Cage at his best. The haunting strings and heavy drums set a somber mood for Cage to deliver a brilliant ode to his dying inamorata. The chorus is simply unearthly, but it is the verses that will make your stomach turn:

“Stare in her eyes to look past horror
Morphine tolerated, I’m copping horse tranq’s for her
Like I won’t have to go through hell again
Her skin is like saran wrap, barely hanging from her skeleton
With each one of her ribs defined, my crib’s designed
To keep the light out cause she can’t lift the blinds
Drifting behind, I’ll be outta friends soon
Nobody visits the guy that keeps the body in his bedroom
She’s barely alive and taking life from me
With no appetite but the meningitis is still hungry”

Closing out the album is a collaboration between The High and Mighty and none other than Eminem. Some heads will be very pleased to find a pre-MTV Eminem spitting his formerly trademark style rhymes on the original version of “Last Hit.” A lot of people may not appreciate the unpolished aesthetic that Em displays on this song, but anytime you get to hear a hungry version of Em, as opposed to the whiny version, definitely take advantage of the opportunity. Mr. Eon makes a strong showing for himself, but is overshadowed by a young Marshall Mathers. A great song to end the album with.

Though “EC III” is an extremely solid album, it is not without its weaker tracks. On “Brawl,” RA the Rugged Man is completely outclassed by J-Zone’s energetic beat, while the Smut Peddlers “Bart Burnt Vs Sherm Penn,” would’ve fit perfectly on their album, with the other weak tracks they released. And Tame One’s tracks, though stimulating, do not convince me that he could sustain my interest for an entire album of just him. That being said, this album is a great showing of cohesion for EC as a label, but not a positive indication of future solo projects that are surely in development.

This album is a huge step up from the catastrophe that was “Eastern Conference All Stars II”, which had a sensational line up of high caliber emcees, yet failed to deliver something worthy of remembering. The vibe of this album is nothing more than what we’ve come to expect, a rugged orgy of drugged up rhymes and chunky beats, all constructed by artists with a passion for street hip hop. Yet this time around, the quality of the product has been elevated, and more focused on gaining exposure for the crew, rather than using big names to sell records. This is definitely a solid purchase for any hip hop lover, and if you’re already a fan of Cage, Copywrite, and the rest of the Eastern Conference family, then you better pick this album up ASAP!