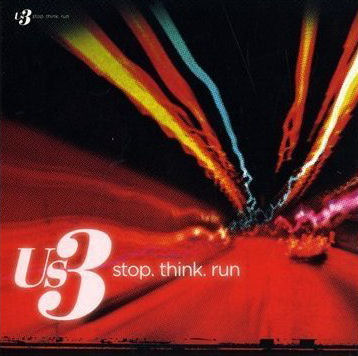 Stop. Think for a moment my friend. Remember where you’ve heard the name Us3 before. Dip trip, flip fantasia. Ringing a bell? Thought so. You may not know why you know Us3 at first, but their track “Cantaloop” achieved a level of ubiquitous radio and video airplay in 1993 that was surprising to all involved. London producer Geoff Wilkinson achieved the seemingly unthinkable in an era where sampling was fodder for a thousand lawsuits – he got Blue Note Records and their parent label EMI to sign off on UNLIMITED ACCESS to their vast archive of jazz records without any pre-clearance. Wilkinson had already been dabbling in sampling their works before their partnership, so EMI could have easily put down a gigantic concrete boot on his ass and stamped Us3 out of existence. Instead their partnership resulted in the album “Hand on the Torch,” a hip-hop/jazz fusion album which became the first album to go platinum in the entire history of the Blue Note imprint. The fuel of this engine’s success was Herbie Hancock’s song “Cantaloupe Island,” and whether or not you know the original, you’ve tripped the light fantastic on a hundred dancefloors to the horny horns that Kobie Powell spit over.

A lot has changed in the last 15 years and change, but one thing has remained the same – Geoff Wilkinson is still the driving force behind Us3. Regardless of who makes up the group at any given time, it is Wilkinson’s fascination with funky soulful jazz beats and breaks that gives every Us3 song its vim and vigor. While Us3’s mainstream recognition has declined, the desire to make fusion music and experiment with bending genres ’til they almost break has only increased. The one-sheet accompanying “stop. think. run” credits this as Wilkinson’s seventh Us3 album, but if you believe Google or Wikipedia there may actually be more. In fact due to record label sales and mergers over the years it’s possible there are several entire Us3 albums that haven’t seen the light of day and never may. Regardless of the shifting corporate conglomerates, Wilkinson has found daylight by using Us3 as an imprint all his own, and he’s put together a brand new crew featuring spoken word poet Brook Yung as the frontman.

Some readers are ready to change the channel already having heard the words “spoken poet.” I know you’re out there. You don’t get Bassey Ikpi and Saul Williams, and you don’t want to listen to somebody just talking over beats for an hour, and you don’t care how fresh the grooves are that Wilkinson can come up with. In this case the one-sheet may be doing Yung a disservice, because there’s nothing about his rap on “stop. think. run” that implies a lack of interest in traditional rhyme flow. In fact if anything he might stick to the beat a little TOO much, as I expected a more freeform vocal performance to match the freestyle jazz sounds Us3 has been known for, but the conviction of this 20-year old’s diction more than makes up for it. Peep what he has to say on “Gotta Get Out of Here.”

“I, look out my second flo’ window
And see a black car ridin with the tints low
Smoke swimmin in the sea from the indo
Hawk spit droppin from the gangsters on the 10th flo’
The ambulance screamin on the projects
Light gleamin on the crime scene, that’s some progress
I heard a couple kids talkin ’bout a gun charge
How if they shoot it from the roof it’d be unsolved
See it’s a plane where I crash at
The city’s just another maze for a lab rat
I see two crooked cops downstairs
Nickel bag in they wallets where they used to keep the badge at”

These days it seems that Wilkinson either creates his own beats or digs so deep in the crates that no one label can be found to call a source, but one can hardly stop to ponder it while listening to the gritty piano bars and mesmerizing vocal performance Yung provides. Calling it “street cinema” or an “urban portrait” just doesn’t do it justice. Even the whining sirens and crying children mixed into the beat at the end don’t convey the dismay of the urban experience as well as Yung and Wilkinson do with the perfect mixture of beats and rhymes. He’s not the sole vocalist in the new Us3 though, as Sene’s uptempo Nasir Jones style delivery rides perfectly over the toe-tapping head-bopping “Can I Get It?” Yes Sene, you can. The two rhyme maestros trade the spotlight back and forth without any jealousy or desire for one-upsmanship – both simply desire to create something MORE than traditional hip-hop. “Keep your hoes homey, had ’em before” quips Sene on “Who Got Next?” Sene seems entirely sincere and serious, noting that they laugh at Sene but he isn’t stressing because he’s “way beyond all that ‘pass go’ shit.” It’s no different for Yung over the hard and heavy bass drops of “Don’t Waste Your Life” when he says “I’m a regular dude, only difference is I spit and I write stuff.” He’s not going over your head, nor is he insulting your intelligence – he’s just relating his life to you over the beat.

Every now and then something unexpected and pleasant comes along that I’m pretty sure most people who listen to GS Boyz and Soulja Boy are going to sleep on. There’s nothing crunk, trendy, fly, or sporty about Us3. You won’t figure out what new pair of kicks to rock or what new dance move to do on songs like “B-Boys” or “Life Love Music,” and quite frankly I couldn’t give a damn. That’s not saying I’m anti-fashion or in any way against candy-painted whips – in fact I’m just materialistic enough to ride around in a sporty little convertible. “The Love of My Life” though is hip-hop and you don’t stop, and while on the track of the same name Yung is actually talking about a woman and NOT the metaphor Common and The Roots used, she can still be heard throughout all 15 tracks. “Something to write to, plus something to give my life to, so you can give life to the life inside you.” That’s what “stop. think. run” does. It’s not profound. It’s not revolutionary. It’s not meant to make you buy anything other than the songs found on the disc. All Us3 does is give life to the life inside you. It’s music that pulls you into a jazzy, soulful, cool mood, pulling you through all of the ups and downs of Yung and Sene while constantly invigorating and refreshing you. Put down the AutoTune, the bling, the bottle of champagne, and for God’s sake put that stanky leg down. Just feel the vibe of Us3. Stop that train and get off for a minute. Even when the song exhorts you to “Keep Movin'” you just want to fall into that pause and drift forever. This is music for the blue note in us all.