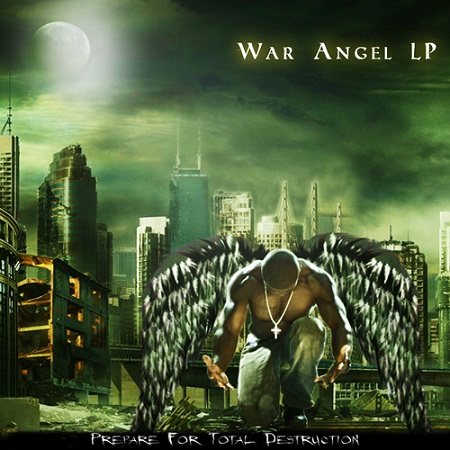 50 Cent has gone digital! The man long known for utilizing marketing to his advantage has jumped on the latest trend. Years ago rappers fueled fans by dropping mixtapes in between albums. It provided a little dough and hype and kept everyone happy. For some rappers it became their bread and butter during a time when sales were down and album delays were plentiful. Now, rappers don’t even bother to drop mixtapes. Instead of bothering with packaging, pressing, and distributing mixtapes many rappers are releasing their music in digital form. Some, like Joe Buddens, offer digital albums for sale. Others, like B.O.B., just give the music away in order to hype something bigger. 50 Cent has chosen the free route with his “War Angel LP.” LP because this is not some mixtape where 50 Cent puts his clever twist on popular songs. “War Angel” is a 13 track street album meant to keep 50’s hype up and his fans happy between albums.

The album consists of short tracks with a few barely cracking the 3 minute mark. The production is stellar. It’s not classic, but it’s damn solid especially for a street album. 50 Cent has always been known for getting dope production from up and coming producers. The only big name on the LP as far as I know is Dr. Dre on “OK, Ya Right” which leaked early. That song is a dope Dr. Dre banger, with a minimal synth hit driving the track and an eerie vocal sample adding depth to the track. The rest of the production is nothing to sneeze at. “I Line Niggas” has a bass line catchy enough for 50 to mimic on the hook. “Redrum (Murder)” flips a vocal sample into a sweet beat worthy of an R&B track, of course 50 Cent takes the song in a different direction. “Cocaine” with Robin Thicke may be the sweetest beat on the LP with its soft bass line and drums being brought together by Robin Thicke’s vocals.

With the production on point, it’s up to 50 to bring it and for the most part he delivers the heat. Track after track he manages to mix in his violent street rhymes with oddly commercial pop references. On “I Line Niggas” he declares “it’s so easy, damn I’m greasy, goons don’t use autotune, just Yeezy” and then states that “there’s nothing to it, cock a banger then get rid of that, hit his fitted cap, he won’t get a chance to twitter that” on “Talking In Codes.” “Redrum (Murder)” and “C.R.E.A.M. 2009” keep the street tradition going. On “C.R.E.A.M. 2009” 50 flips the classic hook by stating that “Cash Rules I Keep A Shooter Around Me, Queens Get The Money, I Have a Nigga Killed Y’all.” Tracks like “Better Come On You’re A Game” and “Get The Message” could fit right in with the hungry desperation found on “Get Rich Or Die Tryin’.” The same could be said with “I Got A Win,” which is the kind of glossy, smooth hustler’s anthem that could make its way to the radio at some point. The only real sore points on an otherwise solid LP are “I’ll Do Anything” and “London Girl.” Both are of the sappier love songs which 50 is known for but have no business on a STREET LP.

In the end, “War Angel LP” does deliver as it does contain some of 50’s best work in years. The best songs on this street album are as hard as 50 Cent’s early work and show that when the man applies himself he can still bring the heat. Still, 50 Cent is a multi-platinum business owner first and former street thug second. By that I mean that as much as he may revert back to the gritty street tales that made him famous, ultimately he has a business to run. That means that even on a street album we’re subjected to tracks like “I’ll Do Anything” and “London Girl.” I won’t say the songs aren’t good, but I have to wonder how anyone could think they fit on a street album called “War Angel.” Those tracks would have been best suited for the official album or the soundtrack to 50’s next movie. Still, there’s little to complain about on 50’s latest, especially considering the price tag. Take a few minutes out of your day and you’ll be treated to 50’s best music since “Get Rich or Die Tryin’.”