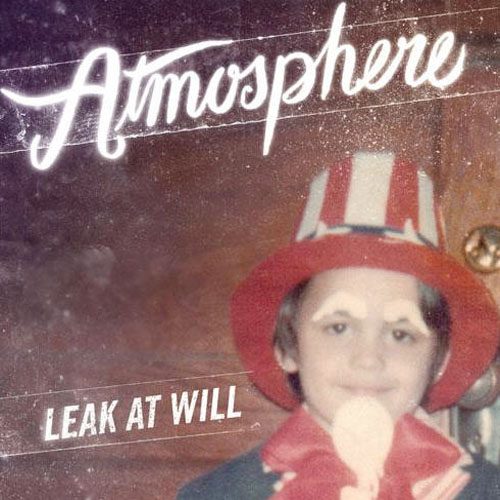 Atmosphere :: Leak At Will

“hello party people. as we approach the launch of our new digital online store anthony and myself have put together another project that we are giving away for free to any of you who sign up for a user account on our online store www.FifthElementOnline.com. the project is a 7 song ep called LEAK AT WILL, and it was a lot of fun to make. nothing too serious, just smiles and cries. consider it another ‘thank you’ for all of the support you have offered us over the years.”

Like last year’s “Strictly Leakage,” “Leak At Will” is a looser, more spontaneous effort than Atmosphere’s official albums. None of the tracks are as experimental or boundary pushing as anything on “Lemons.” Instead, this is the sound of Ant and Slug letting their hair down and having some fun doing what they do best. Ant’s clearly enjoying himself, although there is nothing on here that is quite as block rocking as “The Things That Hate Us” or “Little Math You” from their previous free album. The lyrics are also more subdued and introspective, more “Lemons” than “Strictly Leakage.”

It starts off with “C’mon,” a raucous song about a kid growing up the wrong way in Minneapolis who is saved by hip hop. Ant supplies some banging sampled drums, and Slug advises the city’s residents how they should be living, coming up with the kind of lyrical gems that are the reason why he’s one of my favorite MCs:

“Hey rapper
We know it don’t stop
But don’t forget about the folks on your block
Hey dope man
Whatcha doing with the cash crop?
Gettin’ fat fucking up fellow have-nots?
Hey preacher, politician
Is that the house you live in?
How’s the kitchen?
Hey policeman
Don’t bother
Even as I kid I only played robbers and robbers
Headphone activists
Aggressive pacifists
I ain’t saying that you gotta kill cops
Just look at your life, see what it’s built off”

“They Only Know” samples a song that Madlib used on the last Beatkonducta album, and it sounds a lot like Madlib’s track. Slug uses the downtempo beat to tell a two-minute story of a transient young woman struggling to find herself with “a grudge and a pocketfull of neurotic love.” They follow this with “The Ropes,” about teenage drug dealers. “White Noise” is the lone misstep on the album, a preachy rant against television. They make up for it with “Feel Good Hit of the Summer 2,” in which Slug takes an honest look at the role of drugs in his life. “I won’t lie, little homie,” he starts off. “They opened up doors for me/still hope there’s a moral to that story.” He goes on to talk about how legal substances have replaced illicit ones: “Your family physician is a dope man/that new prescription got you open/came a long way from visions and spirits/now we getting lifted off the cough syrups.” He admits to being a functional alcoholic and pothead who stays away from coke, e, and speed, and who has a love/hate relationship with hallucinogenics:

He ends with some sage advice on drug use:

He follows that with “Mother’s Day,” which tells the story of a single mother with one dead son and one son in jail from both the mother and son’s perspectives. It’s a classic example of Slug’s empathetic rhyming and storytelling abilities. No one can create believable characters like Slug can. He immediately takes you into the world of the mother wondering what she did wrong, and the son who blames his mother for the place he’s in. The EP ends with “Millie Fell Off the Fire Escape,” a sequel of sorts to De La Soul’s “Millie Pulled A Pistol On Santa,” and another stellar example of storytelling rap.

I’m suspicious of free albums; too often they aren’t worth the hardrive space. “Leak At Will” is an exception. The sound quality is good, the beats are great, and Slug’s using his A-list material. This may be a quick freebie, but it’s worth your time. I just hope this means that they are preparing another album.