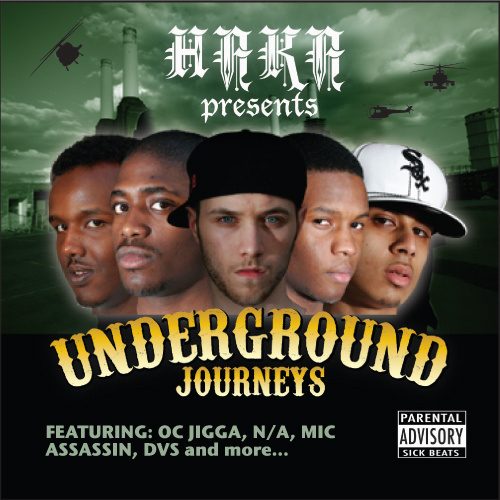 The focus for most hip hop albums revolves around the artists, but in some occasions the producer is the one who is the center of attention and in the spotlight instead. As highlighted producers such as Timbaland and El-P are considered more often in the hip hop scene, the fondness of production talents has increasingly become more popular in recent years. London based producer, Haka, is a fairly new producer in comparison to his cohorts in the underground hip hop scene, but compiles his production with the most creative emcees he has worked with since 2006 to create the nineteen track mixtape, “Underground Journeys.”

Exposed to music as a child, Haka played musical instruments and frequented opened mics in UK while slowly worked his way into making beats since the age of 15. Until recently, Haka’s exposure has slowly increased while collaborating with other UK producers and emcees such as singer Kalldean of So Solid Crew, ultimately leading up to the creation of “Underground Journeys” comprised of his sole production.

At first glance from the album cover and extensive list of UK underground emcees, one might think this is just another hardcore underground album, when in fact it is somewhat of the opposite. While turning to his close confidants who have flourished throughout the underground hip hop scene, Haka incorporates his vision of fusing both hip hop and R&B throughout “Underground Journeys” while maintaining uncomplicated, yet classic beats. Minimal, echoing keys exemplify this exact style as the album commences with “London State of Mind” featuring emcees Insane, Rowdy, and Aggo D. The team makes sure to represent London and does it again in the string laden “London Is Calling.”

Haka’s affinity for instruments and simplistic nature sets the tone for “Underground Journeys” as he reverts back to this style continuously. Horns blare in the funk track “Make It,” while organs add a gospel-like feel to the rather appropriate message of working hard to achieve goals while a very similar sound is found in “All Luv.” Until you think just about every type of instrument is used at some point, harps resonate in “Rough with the Smooth” as emcees Logic and Big Cakes along with vocalist Tamara shows that “life is here, roll with it, make of it what you will.”

The synthesis of R&B and hip hop becomes more apparent in the jazzy “Makes Me Say” as crooning vocals and emcee N/A’s lyricism surges throughout the track that exposes how a woman makes him feel. “N.A.M.E.” is yet another track that attempts to draw in the females and again features N/A who sings out “what’s your n-a-m-e?” Although the R&B styles are subtle, Haka has found a way to integrate and mesh a more relaxed style with stronger hip hop lyrics in a way that is successful.

At one point, Haka attempts to make things interesting, but fails in doing so as he samples a random scene of “Arabian Dance” from “The Nutcracker” ballet as the introduction to “Who Are You.” The transition into the track with its predictable instrumental strings was rather rudimentary and lacked cohesiveness with the other tracks in “Underground Journeys.” It was hard to place where this was fitting in.

Initially, Haka’s beats were intriguing as something familiar drew me into them, but as I progressed through “Underground Journeys,” I felt a bit uninterested as I was constantly waiting for the moment to be fully engaged in the album. Track after track seemed to sound similar as the incorporation of some form of instrumentation was unsurprising. Individually, I understood the elements of each track, but as a whole, “Underground Journeys” lacked the variety and consistency I was hoping for as I was searching for the alternative components Haka has been known for. However, I appreciate Haka for his willingness to explore the fusion of R&B and hip hop and in turn, he has created an album with a more calming tone and laid back feel. Nonetheless, the balance of his extensive list of featured underground emcees and composed beats complement each other well and demonstrates his abilities as a solid producer as there is definitely more to be seen from him in the near future.