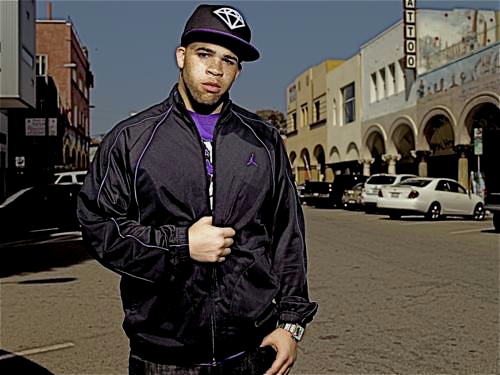 Those who still buy CDs and read liner notes are already familiar with the name Dawaun Parker. The Dr. Dre protégé has produced records for some of the biggest names in the biz, including Eminem, 50 Cent, Jay-Z and Busta Rhymes. Currently Parker is working on Detox and with everyone wanting to know more about the album like if it’s ever going to be released, RapReviews caught up with Parker to get as many of the details as he could reveal.

Adam Bernard: Start everyone off by taking us into the studio with you and Dre. What were your initial thoughts on Dre when you first started working with him and experienced his working style?
Dawaun Parker: That it was rigorous. You put in a lot of time. There was definitely a wow factor there when seeing the equipment and the precision and the top quality material that we were using. The first time I walked into the studio I remember being a little awe struck just by the sight of how everything looked. It was like a spaceship with all the lights and things like that. It wasn’t like I was completely unfamiliar with what everything was either and we just went right to work. The day that I met him and he heard me play and heard what I could do, we started to work that day and it’s pretty much been nonstop.

AB: Is Detox ever really going to come out or is it like a dragon or a unicorn, is it a mythical creature that we just keep hearing about?
DP: I’ve used the term unicorn because of the amount of time that people have been hearing about this project and everyone’s anticipation for it. We are definitely working and all I’m able to say is that it’s up to Dre to make a decision when he wants to push the button, but otherwise we’ve been working. It’s not like an album he was working on before I met him and I think the misconception with that album is that people started talking about it and he announced the title before he even started to work on it. When he announced the title he probably didn’t realize how much weight, anytime he says something how much people put on that. For years they’ve been hearing this thing, but you haven’t heard much from him because he either wasn’t working on it, or was waiting for a time period, but we’re working right now and we’ll see. I know we’re pushing for it to be very soon.

AB: Do you have an approximation of how many tracks were made and how many were thrown away?
DP: No, I will know that when there’s a track listing. When that’s decided I’ll know how many things, but it’s not like a whole bunch of things have been thrown away. I think that we use a good amount of the material that we create.

AB: I know you have to keep most of it under wraps, but musically, how would you say it compares to the two Chronic releases?
DP: I just think that it’s a forward progression. I think that there will be reflections of what’s going on now, the fact that it’s 2009/2010, I think that you’ll hear elements that you recognize as Dre and you’ll hear a crop of new artists, you’ll hear some veterans and you’ll hear a result of his new people, one of them being me. I think that we’ll all contribute to it. It’s having the Dre stamp, but being a full progressing record and we hope that we can give it some classic appeal.

AB: Give me a story or two from inside the studio during a session that was notably crazy.
DP: For me, always the best things for me is when I get to witness a musical display on a really high level. All of the Em session were great. One time I played live hi-hat and Em rapped strictly in my ear and I was improvising based on what he was doing with his vocals and the cadences and the rhythm changes that he was doing. He heard me play on some hi-hat stuff and he said “I like what you’re doing there. Let me rap to you and just match it based on what you’re doing, what you hear and what I’m doing.” We recorded that and that was a pretty cool experience. That was like a hybrid of improvisation and Hip-Hop at its utmost. Basically, all of my first experiences were working with people that I’ve been big fans of, Busta Rhymes, 50, all of em just not really having a huge preconception of what their personalities were but just being like what is it gonna be. Someone like Busta, he came in full of energy and loud and everything like on his records and just seeing that personality be genuine even outside of the booth, those are the moments that I appreciate.

AB: You’ve been behind the boards for a number of prominent artists including Dr. Dre, Eminem, Jay-Z, 50 Cent and Busta Rhymes. Working with huge names like that can oftentimes leave a young producer overshadowed, so tell me a little bit about the history of Dawaun Parker. Where are you from and how did you end up on Aftermath?
DP: I’m from the east coast, from New England, born in Rhode Island and grew up near Boston. My musical past started for me around high school, probably the middle of high school was when I really started getting involved with local people in the area who were making tracks and involved in Hip-Hop, just kind of as a fan. Quiet as kept, as small as a market that is and with a lack of mainstream exposure, at least the Hip-Hop culture and the underground scene is very very active and there are a lot of opportunities for people to be involved. When I was as senior in high school I used to ride up twice a month to the city and go to open mics and stuff like that and try to freestyle. It definitely was a hobby and it started to develop into a real passion, so I guess it was more that love and that curiosity that was the key that made me find any outlet. I would listen to URI college radio station after school because for like three hours after school they would have their underground hip-hop station and I would try to get better by using my own ear as a judge or a guide. By the time I was ready to finish high school the desire to make music professionally started to really become prominent and I applied to Berkeley, which is a pretty prominent music school. I got in and from there it was kinda like where I really started to try to perfect my instrument and perfect making tracks and really starting to get into the production of line. In terms of me getting with Dre, a guy that I met just before I went to school was an A&R in the business and he just remembered my name or my ability so when he became an assistant to Dre in 2005 that led to an opportunity for me to audition, so to speak, and from then on I’ve never looked back.

AB: All of the names I listed before are of older artists, even 50 isn’t exactly a spring chicken. Have you found that your youth has helped you contribute some ideas and concepts that the older generations might not have thought of?
DP: Maybe not have thought of, but I think that a lot of times when you’re working with a veteran they’ve been doing their thing for a while and their focus may not be to say what is the very next new craze or thing that’s happening. I think that whether I want it or not, my youth and my lifestyle and everything will come out in my conversation and in suggestions that I make with music with things that I like or things that reflect what my tastes are or what I’m listening to right now, so I think that’s the thing that I’m looking to provide.

AB: A lot of producers end up jumping on the mic. Are you going to be one of those producers that ends up trying to emcee?
DP: Forgive me if I can correct you with “trying,” I’m gonna do it. I got bars, son. I’m definitely gonna be on the mic. I was just working on a vocal and some stuff last night into the morning for Dre. I definitely think I’m going to follow a lot of the trail and the path that he led. Again, when I first got into being a fan of this culture and all that I used to freestyle all the time, rap all the time, and when I started making beats that kind of fell back. Also from a place of knowing everyone raps, everyone and their mother raps. With me there hasn’t been a need to embrace that thing as well because there are so many people doing it, but as I have gotten more and more into songwriting, as I’ve advanced and grown in my career and seen what opportunities are able to develop, I’ve done a few live shows with my group and the response has been good so I’m gonna keep going with it. The group is The GodBody. It’s a project of mine that I put together before I got my Aftermath deal and I’ve been continuing it. It’s some organic Hip-Hop, I’d say A Tribe Called Quest meets G-Unit meets The Roots. We play with a live band. It’s me and an emcee, but I do all of the production and vocally I’ll be on there, as well. I think we have a lot of good material and we’re really about to start building our grassroots founding.