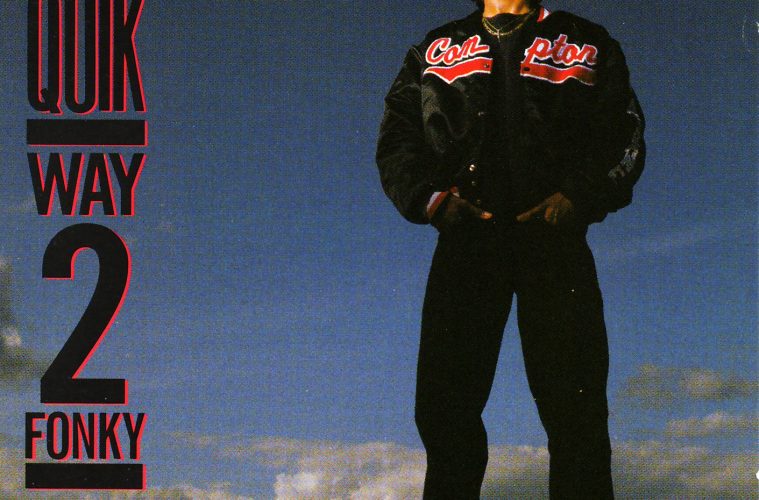 1992 was a remarkable year in West Coast rap music. After all, it marked the release of Dr. Dre’s seminal classic, “The Chronic”. Most people tend to overlook the other exceptional releases of that year, which included Spice-1’s self titled debut album, Too Short’s “Shorty The Pimp”, MC Ren’s “Kizz My Black Azz”, and Ice Cube’s “The Predator”. Another one of those overlooked albums is the sophomore effort from Compton’s own David Blake. Professionally known as DJ Quik, Blake set out to prove that the success of his debut album, “Quik Is The Name”, was indeed no fluke.

The album kicks off with “America’z Most Complete Artist”, which samples The D.O.C.’s “No One Can Do It Better” and in retrospect is more of a statement of fact, rather than a mere paltry boast. “Mo Pussy” features a sample of Blowfly’s “Convoy” and an interpolation of The Gap Band’s “Oops Upside Your Head”. It can be seen as a loose (no pun intended) sequel to “Sweet Black Pussy” from the first album. As one would expect, the song is all about sex. Quik even finds the time to raise HIV awareness, advocating condom use on the song. The title track, “Way 2 Fonky” was the first single released from the album. The video featured Quik dressed in all black, surrounded by his homies in a dark warehouse setting that becomes illuminated by random flashes of light. On the song, Quik takes time to address issues with MC Eiht and Bronx-based rapper, Tim Dog, who had released a song called “Fuck Compton”. He claimed that he was growing tired of the increasing popularity of West Coast music that was causing him and other East Coast acts to be overlooked by record labels and publications alike. Quik’s response cut straight to the heart of the matter:

“Now when your records ain’t that funky then it’s easy to disrespect this
Cause you know that when I hit I didn’t miss
Just like that “I’m Born and Raised”, you wish you could fade
And when you picked up that album cover you knew I was paid, Tim
Cause we ain’t goin’ out and we ain’t stuck in that old school shit
That boring flavor that just don’t hit
Cause this is ninety-two, and yes yo’ style is through
And if your record ain’t sellin’ well fool I thought you knew
That this is straight Bronx killa, straight Bronx murderer
Yeah yo’ city’s a dump, and fool yo’ shit don’t bump
And ‘member the “Jack the Rapper”? Yeah, you punk ass sap
That’s when my homeboy D, was bout to flatten yo’ cap
And you apologized to him, started kissin’ his ass
Sayin you only dissed Compton for the money, so he gave you a pass
But you ain’t movin’ shit on the streets
Get off the nuts of my city with them wack ass beats that ain’t Fonky”

Every solo album that the Quiksta has released contains a “Quik’s Groove” track. On this album, the second edition features a mellow bassline accompanied by drums and a light flute sound. It’s so damn smooth, it’s no wonder that “For U 2 Rip To” is the subtitle. The album’s other single was “Jus Lyke Compton”, and spoke about how so many cites seemed to be heavily influenced by the urban culture of Los Angeles. Some of the cities included Oakland, San Antonio, St. Louis, and Denver. However, the narrative of Denver is filled with contempt as Quik describes an incident that went down during a visit to the town:

“But still my story ain’t over cuz I got one more to tell
And the people of Colorado, they know it well
It was all in the news and if you don’t remember
I had this show I did in Denver
With a punk ass promoter in a bunk ass skating rink
Bitches was loving it, but niggas was shovin’ and shit
To the front of the stage to throw their gang signs
But I’m getting paid so I didn’t pay it no mind
Then I poured out my brew onto their face and chest
then they start throwin’ soda, and fuckin up my Guess
When it was over two niggas needed stitches
Got cracked in they jaw for being punk ass bitches”

“Me Wanna Rip Your Girl” is a reggae-influenced joint, much like “Tha Bombudd” from Quik’s previous album. Playa Hamm adds a verse to “When You’re A Gee”, which samples from the late (and Quik idol) Roger Troutman’s version of “I Heard It Through The Grapevine”. One time associates 2nd II None make appearances on “No Bullshit” and “Only Fo’ Tha Money”. On the latter, the fellas spit rhymes about sexing the ladies, but only in the interest of financial gain. Whether they get paid on the spot once, or on a recurring basis, the point to be made here is that the D is NOT free. As a pre-teen, I’d often skip over “Let Me Rip Tonite”, but upon listening to it as an adult, I find it quite entertaining and practical. Sexy Leroy advises everyone to just “leave the bitch alone” if she’s not willing to give up the goods, making reference to Mike Tyson in the process. Things come to a close with the posse cut “Niggaz Still Trippin” and “The Last Word”.

Seventeen years have passed since “Fonky” was originally released and DJ Quik is still in the game…make that ON TOP of his game. His style has always been one that is endlessly evolving, it’s more evident with the releases following this album, but there were a few glimmers of that on this album as well. While the subject matter doesn’t differ too much from that of the other West Coast albums of this time period, Quik has the skill, talent, and raw charisma to do it slightly better and a lot more funkier.