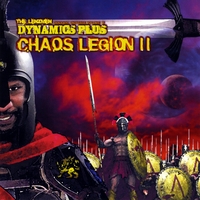 Dynamics Plus is back. Technically he never left, but I decided to digest his Chaos Legion series separately to avoid any possibility of overload. “Chaos Legion II” takes place 5 years after the original “Chaos Legion” and takes place in the same world. In fact, “Chaos Legion II” was advertised with a commercial in the first album. This album kicks off with Horace Green, the scribe, letting us know exactly where things stand in the world after the all out war of the original album. Though most forces were wiped out, King Xertes still remains and a few pockets of soldiers remain. Yes, this is a sci-fi/ fantasy album and your enjoyment of the second album relies heavily on your enjoyment of the first album. While this second volume can stand on its own feet, things make much better sense if you are familiar with the happenings of “Chaos Legion I.”

Knowledge of the original storyline enhances this project, but the lack of it does not detract from it. Songs like “Day of Scarecrows” tell their story vividly enough to entertain. The story tells of a group of soldiers who encounter supernatural creatures which they can not defeat. “Twilight of the Crystal Castle” is an epic final battle sequence through rap. As entertaining as the album is, it begs the question as to what place such an album has in the current landscape. None of these songs are songs you will find yourself playing in your car or adding to your iTunes shuffle simply because they are so dependent on each other. This is an experience from start to finish. Listening to one song is much like catching 5 minutes of a movie, you may be able to discern what is going on, but you need to experience the whole project to understand it. As whole, this project is entertaining and unique. Not since Prince Paul’s “A Prince Among Thieves” have we had something like this in the rap landscape. Though the Chaos Legion series doesn’t reach Prince Paul’s level of complexity with different rappers, Dynamics Plus does an admirable job with the voices and variety. The difference here though is Prince Paul’s use of such a huge cast of actors. Without the big names showing up for one song/character on his CD, Paul’s hip-hopera would not have become the magnum opus it is. Without that luxury, Dynamics Plus has to rely on the storyline to carry his CD. The man writes and publishes his own comic books, so he has a vivid imagination and a mind suited for storytelling, but today’s fickle media audience is looking for neither. It’s a shame too, considering the time, thought, and effort that went into this series of CDs.

This CD is for real hip-hop fans. Those fans that truly appreciate the art and what it is capable of. It’s an intriguing project that shows us that hip-hop has no boundaries. It’s not a perfect album. Some of the beats get repetitive and Dynamics Plus’ flow could use some work, but the technical deficiencies do not detract from the project. It’s a throwback to the old days of radio, before the time of television. It’s as close as one will ever get to answering the question of what classic radio shows would sound like had hip-hop been around in the days of The Shadow. The CD is best recommended with “Chaos Legion I” as a companion, but any fans looking to expand their horizon should be pleased with either CD.