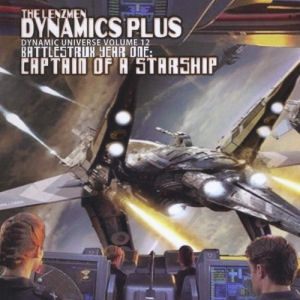 Dynamics Plus :: Volume 12 – Battlestrux Year One: Captain of a Starship

Somewhere between the demented genius of Kool Keith and the lyrical dexterity of the Hieroglyphics lies the science fiction of Dynamics Plus. Put simply we’re talking about hip-hop meets space opera – it’s like throwing Doctor Who, Del the Funky Homosapien and Bob Dylan into a BlendTec and hitting the “musical puree” button. (Rap smoke – don’t breathe this!) This is not a new phenomenon for the RapReviews crew – Matt Jost first opened a portal into this strange galaxy back in 2005 when he covered “Doctor Atomics and the Fortress of Solitude.” This was apparently the sixth album continuing the saga of the voyages of Captain Dynamics, although like Leonard Parts I-V we have no idea where the rest went. Equally perplexing is what happened to volumes VII-XI of his adventures – perhaps like me some of you Whovians will assume the tapes got erased by the BBC in a shortsighted effort to recycle material and/or clear out some storage space.

In today’s chapter of the journey, our hero Captain Dynamics finds himself exploring the ass-end of a universe where starships are being destroyed at an accelerating rate. “You’re not going into the Triangle?” asks a feminine sounding robotic crewmate. “Not on the first date” quips Captain Dynamics. This double entendre exchange during “Captain on the Bridge” is fairly indicative of what we’re working with here. Dynamics stays “in character” throughout the album, while apparently breaking the fourth wall a la Deadpool to make mocking comments about the absurdity of it all. It’s in fact possible that Dynamics is actually playing ALL of the characters crewing his spaceship, a feat of madness equally worthy of Deadpool and perhaps Robin Williams too. Apparently the solution to the spaceship crisis Dynamics is investing is to “find the Omega Pegasus” – possibly a derelict spaceship – though I’m not honestly sure why. I have the feeling whatever’s on it is like the vaunted Omega 13 of Galaxy Quest – no one knows if it’s good for anything until forced to use it out of desperation.

I wish I could tell you this is a compelling journey “to infinity and beyond” but I’m afraid the adventures of Captain Dynamics aren’t quite that good. There’s no doubt he’s got a good flow when he gets around to using it on songs like “Lair of the Beast” when he’s battling an intergalactic Space Kraken, but even for a self-confessed hip-hop nerd what Captain Dynamics is working with is a little hard to get into. It’s not that I’ve missed 10 out of 12 chapters in this story – many was the time growing up when I dived into a fantasy or sci-fi book series halfway through and figured out what was going on without having read the rest (although once I could track them down I did). The problem here is that the story isn’t that good. I used the term “space opera” earlier, which some have used derogatively in the past to describe shows like Battlestar Galactica and Star Trek. In truth though good science fiction entertainment needs soap opera elements – someone heroic to root for, some great evil to fight against, and often times a little romance so the male or female lead is more human and not as robotic as the enemies they fight.

Captain Dynamics lacks that humanity, and the fact his crew sound like voice modulated robots reflects this problem. This is one man’s hip-hop science fiction adventure, and although he clearly possesses the intellectual power and production technique to make it work in audio form, even hardcore hip-hop nerds will find it lacks something even medicore commercial rappers have – passion and soul. So much time is put into executing this drama correctly that so little of it actually has boom bap, witty rhymes or a hero whose adventures you’d actually care about. If you want to see fantasy and science fiction put together in a hip-hop context, you’d be far better served to check out the adventures of the insane Dr. Octagon or the drunken MF DOOM. Both have one thing in common with each other that they don’t with Captain Dynamics – they remembered to put the beats and the rhymes first and the comic book style structures second to support them. Captain Dynamics did it the other way around and it’s little wonder he ended up at the backward end of the universe trying to save spaceships instead of having grand space opera adventures worth hearing about.

Dynamics Plus :: Volume 12 - Battlestrux Year One: Captain of a Starship
3.5Poor
Music3
Lyrics4