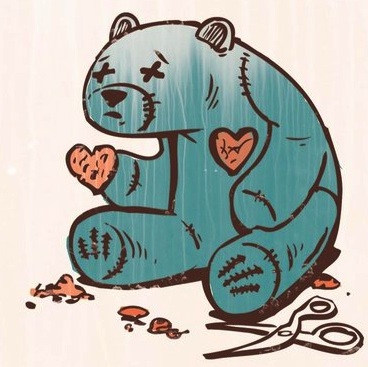 A Bi-Polar Bear is an interesting concept, especially as depicted on the cover of “Today I Found Happy.” Pictured is a stuffed bear, the traditional stuffed animal for children everywhere. Instead of the saucer-sized eyes that are often used on such animals, we find two “x” marks as eyes, the cartoon symbol for death. The bear has a pink heart attached to his chest and another pink heart in his hand. Strewn on the floor are a pair of scissors and the remnants of the pink fabric used to cut out those pink hearts. The significance of the image is open to interpretation, but the music that accompanies it makes it clear that Bi-Polar Bear is about expectations and the pressure to meet them. A stuffed bear is expected to be happy, but why does it have to be? Rather than spiral into a completely negative take on life and the expectations society places on us, Bi-Polar Bear chooses to simply explain why sometimes the bear isn’t happy.

Consisting of Ugly Orwell and August, Bi-Polar Bear is a duo of emcee/producers who take their name quite seriously. By that I mean that even the music exhibits somewhat bi-polar characteristics. For the most part the album consists of upbeat music paired with serious lyrics. It’s as if the duo didn’t want to depress anyone when relating their story, so they chose to balance the lyrics with party-ready music. “Her For Him” is a funky party record paired with not so uplifting lyrics. Instead of clashing, the uplifting music provides hope for what could be a rather dreary message. “NPFJ” depicts the despair that one can experience in life:

“You geek Christians speak with deep passion
Down from a miracle into what it has been
Just wind in the sails of a slave ship
That loses its course, but never destination
Geek Christians slow down the boat now
Lift us the fuck back up in the eyes of God
I’m anxious, yes, but you’re nervous
Maybe there’s nothing behind the curtain
Who then will protect the virgins?
Slow down Virginia, nothing’s for certain
Well, maybe those rocks in your pocket
When shit’s that heavy it gets hard to stop it
No problem, live long and prosperous
Die young and sit at the feet of the father
Your father, mine is no killer
Mine is still human, mine is still with us
No wars for him and no schism
And the flaws in him are no prison
No pulque, Christian listen
You are on a drug that will kill your children
…
I remember one time I tried to kill myself
Took a month full of lithium and glued myself
To the floor of the bathroom and told myself
To hold strong to the hate that I sold myself
And then in the ambulance I know myself
Knuckles white on the bottle and I throw myself
Into a sleep way deeper than I’ve known before
The kind of dreams way deeper than I’ve know before
Waiting for someone to show himself
But don’t want to go where he won’t go himself
In the bottom of the bottle that my tired hand holds while my eyelids twitch
Is a place like this
Wake up and my mother says
Thank God you’re alive and my brother says
Thank God you’re alive and my father says
You didn’t see him there, I think God is dead”

While the track is a criticism of modern religion, August’s personal experience provides insight on his feelings. The record is not completely bleak, as the duo uses their pain to convey their hope. “Good Moanin'” is an example of this as Ugly Orwell relates a moment of happiness. The album remains an up and down trip between hope and despair. The hope is ever present as the despair is used as a reminder of the lows August and Ugly Orwell have experienced as individuals.

“Today I Found Happy” is a compelling look into the journey of two artists striving to make it in this world. The important word here is “world” as Ugly Orwell and August don’t just share their misfortunes in the music industry, but present their entire lives as an open book. The honesty and willingness to address all topics should endear the duo to fans. The unique, dope production should ensure that listeners will do more than pity the group. The finished product should make the duo a household name amongst fans of honest, moving music. If our stamp of approval isn’t enough to motivate you to check the duo out, consider the fact that they were named one of URB Magazine’s Next 1000. Still not enough? The duo is reportedly working with Blue Sky Black Death on their next project. Now that your attention is had, click the link at the top of the page and download the album for free.