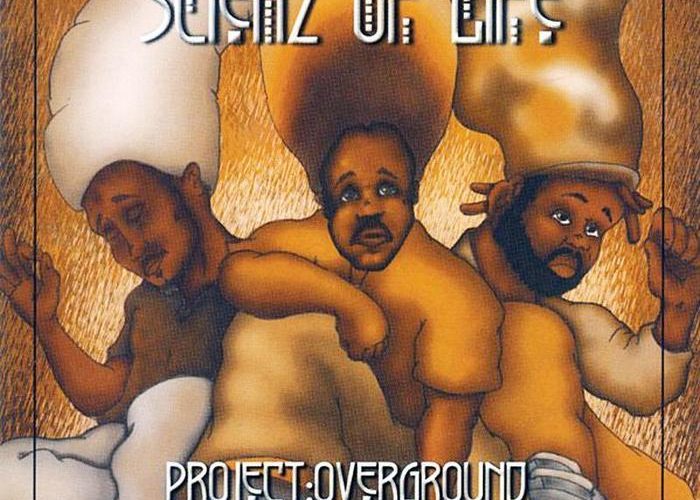 Tired of being confined to the so-called underground, Scienz of Life have come up with “Project Overground: The Scienz Experiment”. Time will tell if it’s going to be the Scientific breakthrough. If the experiment fails, we can still learn from it, as such is the nature of experiments.

Not surprisingly, “Project Overground” is handled by advanced students of the game. Brothers Lil Scienz and ID 4 Windz grew up in the Bronx and later moved to New Jersey where they hooked up with Inspector Willabee. Together they formed Scienz of Life and signed to Bobbito’s groundbreaking Fondle ‘Em label, where they dropped the singles “Powers of Nine Ether (Distorted Views of Life)” and “Metaphysics” in ’96 and ’97, respectively. The “Coming Forth by Day: The Book of the Dead” album followed in 2000 on Bigg Jus’ Sub Verse label. Last year’s three-track single featuring “Scienz of Life” (now called “Metaphysics 2030”), “Keep On” and “YIKES!!!” announced their now available sophomore effort.

With the album’s credo hovering like a potentially bad omen over these heads, it is important to dismiss any notion that Scienz of Life might be selling out or something. If someone still decided to accuse them of any such behavior, they would only verify how twisted the rules of the ‘underground’ really are. Although “Project Overground” marks a departure from abstract/avantgarde type tracks and is definitely easier to swallow than its predecessor, fans of sincere rhymes and beats will not be disappointed by this album. SOL are a tight unit spreading a positive message over soulful tracks. Just don’t call them ‘underground’, because they’re through with preaching to the converted.

The album starts with “Metaphysics 2030”, a song with great replay value. Can’t have a song like this without KRS-One’s “metaphysics, the science of life” quote, and indeed it is thrown into the mix. The track itself is slow-paced, with a few piano trickles and a lonely guitar chord providing a melodic background. What at first sounds like a randomly put together track reveals its beauty bar after bar. Surely no one will “confuse it with no Mickey D’s commercial.” Especially with tightly woven verbalistics by Inspector Willabee, Lil Scienz and ID 4 Windz, who closes out “Metaphysics 2030” with this little tongue-twistin’ excercise:

“I’m nominated the greatest, meticulous with all races
sealed, approved, validated, appeal for all ages
to break down basics effects when God made it
Equate the fragrance, society’s naked, call it the Matrix
This day and age we live breathes hates that shake the pavement
the Scienz of Life gang remains engraved when in placement
for all occasions amaze, laced with flav for the cravings
the jet-black ravens against the grain slavin’
The rhythm might cage you from mainstream invasions
The three-part arrangement with activation of ancients
removal of materialization from instrumentation
The picture-paintin’ scripture with written lyrical favorites
from the powers of the nine until…”

After this cerebral opener, SOL put the dial on “WCON Radio” (W Conscious Radio) and try their best to educate the masses. “Play This” would be perfectly at home on any neo soul playlist with its spheric, lucid sound and dreamy vocals. The song must have been written with a live audience in mind and it will most certainly become part of the group’s live set. In fact, the whole of “Project Overground” has a ‘live’ feel to it, as Scienz of Life take the time to talk to the audience between songs, doing impromptu performances during short interludes. Because there’s a lot going on, this is an album that you have to take your time to listen to. Read between the lines, and you’ll find yourself transplanted to their “burrough of Criminal Minded LP’s, Ultramagnetic MC’s, DITC’s, Ricky D’s, please.” Listen beyond the rhymes and you’ll become aware of the fine layers of sound that make up “Alphabet Soup” and detect noises that sound like they were recorded in the open countryside, supplying a surreal touch to this rap quiz.

Justified or not, SOL see themselves in the tradition of the torchbearers of hip-hop culture. “Whatever happened to original rap songs?” they ask in “Original Rap”, hoping to become part of the solution rather than the problem. However, when they just add some token ‘ancient’ chants to their basic formula in “Ancient Ritualz II (Ain’t Nuttin)”, ‘originality’ is not exactly the term that comes to mind. For some reason the jazzy tracks on “Project Overground” probably work best. On “Anthology”, an ode to black music, their high voices contrast well with the moody, melancholic music. “Jazz Sessions” with its piano loop is more in the hip-hop tradition as Lil Scienz once more draws out their plan:

“I write jazz melodies so heavenly, intensity
enough to reach man, woman and child in Tel Aviv
Words soothe and heal like remedies, the recipe’s
anything from guitar strings to piano keys
Modern day legends representin’ those before me
musicians to revolutionary missions, it’s all glory
Some day I tell stories of great ones
but now I give verbal blessings from youth to adolescents, here take one
classic like a Bob Marley live set
classic like Garveyism, spreadin’ wisdom from pyramids to projects
Lyrics I inject in your bloodstream
produce the antidote to make this grammar spoke change the flow of the mainstream
I write rhymes till my fingers turn gang green
still around the clock I can turn on the radio and hear the same thing
Brothers and sisters in this three-dimensional mindstate:
person, place and thing, money, hoes and bling
sex, wealth and death, God, Jesus, devil
It’s ’bout that time we take you on a higher level”

Among the hardcore underground heads, other cuts may spark more controversy. “Guitar Club” is an all-out club track, it’s even set at a club. Consisting only of sharp guitar licks and a few bass slaps, this easily reaches ‘original’ status as you can clearly see that this is SOL’s very own idea of what they think a club track should be like. On the following “Too Hot for Words” a tight rhythm section leads the way to your body movin’. If you think that hip-hop is allowed to party every once in a while, consider Scienz of Life potential party starters. “Hot Bananas” flips some nice hymnic harmonies in the background, but the syrupy soul that the male singer pours over this track may be too much for some. That should be no reason to overlook the flawless rap performances, though. It seems as if SOL surprise themselves with these joints: “Whoever thought it’d come to this, y’all, bring hip-hop to the dancefloor?” wonders Lil Sci in the fast-paced “Shake it Off”, only to offer: “Let’s dance, the forgotten element / rock, rock your body to the beat without hesitance.”

With timeless gems like “YIKES!!!” (w/ MF Doom), Scienz of Life should have no problem connecting with like-minded folks. The question is whether they can reach out and touch those who so far have been out of their reach. The new Scienz of Life sound comes very close to what a group like Slum Village promises but fails to deliver. Smooth, soulful beats and lyrics derived from hip-hop’s essence. There may be a disparity between their not very graceful voices and hectic flows and the mellow sound textures, but hip-hop is known to produce odd pairings and ever so often they work.

Ultimately, something prevents “Project Overground” from moving into the upper echelon of hip-hop albums. It could be the beats and samples who mostly are of the same bland color, it may be the often careless delivery. Plus you should expect some foul language. Still, at long last, we’re dealing with ‘conscious’, ‘positive’ hip-hop music again. Leaving the typical bitter underground blues behind, Scienz of Life make music to brighten your day and illuminate your night.