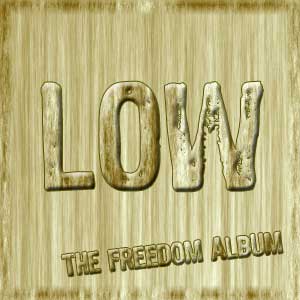 “The Freedom Album” is a bizarre title for the music it represents. Low has no clear higher agenda here. He seems thoroughly enamored with the ideals of typical club rap, exploring sexual and party-based themes as readily as anyone. There are several songs on his album that are clearly aimed solely at kick-starting the spot, conflicting with some of the other material which explores the theme of freedom as an ideal within the context of conformist rap music.

On the other hand, Low may be on to something, intentionally or not. Music is a logical escape to freedom, an ever-changing world in which he can express himself as freely as he is comfortable with. “Live It Up” hints at this, with a chorus that instructs, “baby lift that cup, and just live it up.” The song isn’t that great, but Low celebrates his unremarkable life with utmost sincerity. He speaks occasionally of the spirit of music that he feels controlling him. This is problematic, of course, because elsewhere he spouts misogynist raps in a strictly predictable way. Enough print has been wasted discussing how dull and pointless this is, but if these are the things he knows and loves, I guess he’s free to rap about whatever. I’ve become indifferent.

This album frustrates me a great deal as a fan, because the elements are there for some exceptional music. The opener, called “Thank You,” has him thanking an unnamed spiritual force, ambiguously presented as “father.” This theoretically sets the stage for an exploration of his beliefs. “Party Don’t Start” is a stunning song, made so by Dez’s production rather than rhymes of any consequence. A bare rhythm carries Low’s words through to the chorus, where a symphony of melancholy whistle noises enlivens the track. The hook itself matches the intensity of the music, making Low’s conversational rhymes seem lifeless by comparison.

From here on out, inconsistency sets in. “Do This Anymore” vaguely indicts commercial rappers over a wispy electric guitar, but the hook is inferior. Low seems to be relying too much on the conventions of rap music instead of following his own path of expression. “Southbound” is another explosive classic, just like “Party Don’t Start,” with an empty drumline surrounded by various additions, including a twisted voice and organ stabs. Low represents himself well here, flowing freely instead of tackling any particular subject. “Skills” follows, and it’s good but clearly not what Low and Dez are capable of. Here, Low raps his ass off but the production is not as daring as Dez has shown he can make.

“Anybody?” returns to Dez’s experimentation, mixing those same drums with subtle space noises. Low flaunts his storytelling skills, which are substantial, but he wastes them on a lazy exploration of his love life. “Doin’ It Jus4U” uses a more basic, yet still remarkably funky guitar, but Low is still using his “freedom” in a disappointing way. Instead of leading by example, he attempts to indict rappers who lack his skill. His drawl is comforting, and his talent certainly doesn’t lag, but he rests his mind on an ideal that he cannot reach due to his lethargic approach to rapping. Unintentional hypocrisy aside, his rhymes are not very interesting, as he projects bland concepts instead of giving a personal twist to the proceedings.

Dez provides the entire sonic landscape of “The Freedom Album,” and he lacks the steady flair that he shows in a few cases. Make no mistake, two or three of his productions are brilliant, but he allows similar horns and drum programming to creep into the mix on several occasions. Still, the album is a consistent and catchy body of work, and he has crafted an original regional sound that could be tuned to great effect. With a little more variety to enhance such a complete effort, this could be remarkable. Choice moments, such as the excellent “Party Don’t Start,” toe a line between haunting and uplifting that is rarely tapped into in rap music.

I hate saying this from a critical standpoint, but if Low hops back into the lab with his man Dez and touches up his subject matter, wonderful things will follow. There are a couple of classics to peruse for now, and hopefully lack of experience explains the rest. There are no awful songs, but when such mediocrity is paired with perfection, a slothful attitude toward the recording process is surely to blame. Until next time, this is just an appetizer.