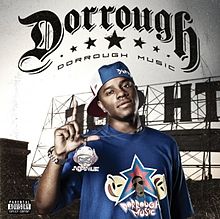 “I’m loud (I’m loud) like a superbowl kickoff
My slab got a lot of niggaz pissed off
Yeah yo, paint shine like lip gloss
Cadillac got a wide body like Rick Ross
Took time but my cash got right
If I want it I’ma buy it I don’t ask no price
Rearview mirror, jumbo dice
Trunk hit hard like Kimbo Slice”

If you feel you’re the most thorough new rap artist coming out of Dallas, why not combine the two and call yourself Dorrough? Or better yet, just be born with the name. It’s a lucky coincidence that Dorwin Demarcus Dorrough hails from Dallas, but it’s an even luckier coincidence to name drop Kimbo Slice in a song right as the street fighter turned MMA pugilist is getting a second chance at fame in the UFC. Both have a lot of skeptics to prove wrong. While the 2Much produced “Ice Cream Paint Job” has been headed straight up the charts since debuting this year, it’s almost too good to be true for a rapper who used to handout his mixtapes for free at basketball games just to get heard. In fact by Dorrough’s own account, basketball was his ticket to success because “after school you either went outside to hoop or you got into trouble.” Well Dorrough managed to stay out of trouble because here he is with “Dorrough Music,” set to prove wrong the doubters who never thought he could get this far. Much like Slice himself, Dorrough’s gotta eat, and can’t waste no time on high-maintenance females. He doesn’t sound angry about it on the Joe Blowe laced “She Ain’t Got it All” though featuring Lil’ Flip – he sounds amused.

“See she ain’t got it all; she ain’t got it all
All you crazy hoes – I know a lot of y’all
I had this one girl, she had a body though
Pretty in the face, just like a Barbie doll
I met her in the club, she was hot and all
At first I really liked her, but later not at all
I took her to the crib, and she was naughty y’all
She took me to the head, just like a Tylenol
She seen my piece and chain, she seen my diamond rangs
That’s what the problem is – she feel I got it all
See I don’t make the game, but see I play the game
So I’ma call the clique and toss her like a volleyball”

There’s a unique charm to the sing-song delivery Dorrough displays on this song. His Texas accent is think, but he’s not hard to understand, no not at all. Shit, see, that’s just what happens – Dorrough gets in your head. His friendly flow is catchy and easy to imitate and after hearing the song just once you find yourself singing along with the hook. A few more times and you’re singing the words. He’s rapping, but in a very laid back and natural way. The most apt way to put it is that Dorrough is a natural game spitter – he’s not trying to convince you he’s the hottest lyricist going but he’s not so simplistic that you can’t get with it. Natural confidence is a quality many of the great rappers of Texas have, from Bun B to Chamillionaire to Devin the Dude, and while Dorrough is rather young and a relative newcomer the confident flow could fool you into thinking he’s been out for years. Even using a cliched rap phrase like “Never Change,” it’s easy to believe on the Todd H beat that Dorrough is 100% true to himself no matter how little or much he makes as an artist.

“I cain’t believe that we done fell off (damn)
Sometimes I sit back and reminisce ’bout the times we was younger
From the time we was smaller, all the winters and summers
Now you ain’t here when it’s sunny but you was thurr in the thunder
My nigga, just think back to all the times we used to kick it
But now we only kick it every other blue moon
And a lot of that is my fault, but a lot of that is yo’ fault
It’s all good, we both fault, but now we don’t even talk
Naw, that ain’t even how we get down
My nigga we need to sit down, shit every time we hit town
and kick it, and visit, so everythang is ever clear
My nigga I’m forever here”

The longer you listen to Dorrough, the more your estimation of him as a poet rises. I use the word “poet” as opposed to “rapper” because a lot of times, the thoughts that Dorrough puts down over wax are about relating to the audience first and foremost. A personal note over a good beat means as much to Dorrough as an easy rhyme if not moreso, a quality which also makes him kin to another famous Texas MC – Scarface. Again it’s too early in D’s young career to really say he’s at that level yet, but for rising so quickly to fame in such a short amount of time, he shows a lot more promise of becoming that type of artist than most. He’s also got just enough fellow artists from the South to show love, but not enough to let them overshadow him on his debut. Slim Thug comes through on the krunk DJ Montay produced “Piece & Chain Swangin’,” Tum Tum gets down on the Todd H “Trunk Bang” and Mista Mac guests on “Flashout.”

Dorrough has plenty of hard hitting songs for the trunk on “Dorrough Music.” You’ll bounce along to “Wired to the T,” vibe to the crossover groove of “Hood Song” featuring Tomeka Pearl and “Walk That Walk” while snapping your fingers at the same time. Just imagine a 2009 rapper who could do a song as catchy as the GS Boyz without managing to insult your intelligence at the same time, and Mr. Dorwin Demarcus Dorrough is your man. The question is, with all the promise Dorrough shows, where is he going to go from here? We come back again to Kimbo Slice, a heavyweight who showed a lot of promise early in his career, only to find out he was hard hitting until HE got hit hard. Slice has had to resurrect his career and get one more shot at fame, while Dorrough is getting his first shot as we speak. Let’s hope that unlike the hard-hitting Kimbo Slice, D doesn’t fall victim to his own hype.