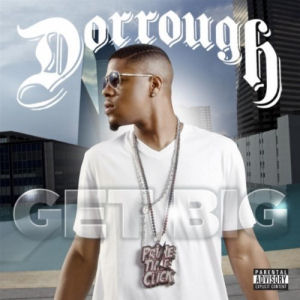 Dorwin Demarcus Dorrough took the hip-hop world by surprise with his first album “Dorrough Music.” Coming straight out of Dallas, Texas the baller turned rapper turned even more ears with the runaway commercial success of “Ice Cream Paint Job.” Even those who couldn’t afford to floss candy paint like D could appreciate how catchy the song was and how natural his flow and sense of humor were. Whether it was his homemade mixtapes that built up his confidence or raw talent that just needed a major label and good producers to shine, either way Dorrough made an immediate impact and already had consumers and hip-hop followers anticipating how he could follow his unexpectedly strong debut. With the self-titled first single off “Get Big,” friends and foes both got their answer:

“Say, hu-hu-hundreds (hundreds) fifties (fifties) bitch I don’t exaggerate
This a game for ballers only, ballers can participate
All these niggaz frontin, throwin money like they paper long
Ear big diamonds, throwin money now they paper gone
Idiot! Wh-wh-what are you? Coach, we need a W
And this nigga game suck, I think it’s time to substitute
Them ain’t really diamonds in your ear, somebody hustled you
Takin all your revenue, boy you don’t know what to do!
Ha! Say you betta double hustle yo’ fees
Ol’ broke ass rats ain’t got enough cheese
And you out here lookin phony, tryin to stunt like me
Nigga please! Ol’ broke ass nigga”

Much like the song’s lyrics, Nitti’s beat on “Get Big” is simple and gets right to the point. There may not be more than three notes to it, but the bass is so fat and heavy that a melody would just get in the way here. Dorrough is anti-recession and proud of it on this song, “makin stupid cash” while even smart Wall Streets cats are standing on the unemployment line. The first single paved the way for a successful follow-up, the Demetrius Davis produced “Hood Chick Fetish” featuring Yo Gotti. Once again there’s nothing unnecessarily sophisticated about Dorrough’s verbiage here – he’s just spitting what he likes and how he feels to the beat. By the end of this song, all aspiring Dorrough girlfriends will know how to impress D when they see him up in the club:

Let’s summarize the requirements here – Southern accent, Coke bottle figure, extra thick booty, sexual freak tattoos, and her own 9 to 5 job and bank account so she doesn’t have to depend on a man. Perhaps that’s why Dorrough wrote “tired of sayin INDEPENDENT” because it sounds like a different way of saying the same shit Lil’ Boosie did. Again though making this song more than what it is would defeat the purpose. The language has to be altered somewhat to get radio or video spins but the beat and the rhyme can still get the point across effectively. Dorrough’s laid back Dallas drawl doesn’t fail him on the song.

“Hood Chick Fetish” isn’t the only other hot song jumping out on “Get Big” though. In fact it seems as though D and his label are capitalizing on the first album’s success to do more collabo’ and you can’t blame them for striking while the iron’s hot. As a result you’ll hear Juvenile on the Recka wrecked track “Way Better,” Ray J making his cameo on the super quiet storm Raw Smoove beats of “Breakfast in Bed,” and Slim Thug helping Dorrough turn police restraints into a metaphor for shacking up with just one girl on “Handcuffs” – after all when you’re young and rich you can play the field instead of settling for one chick. That must be why Dorrough is sleeping with a girl who claims her man is “just a friend” like Biz Markie, or why he “keep her pussy poppin like a rubber band” or why every other night he’s “giving her the moose dick.” Some might say he’s unnecessarily crass, but Slim Thug makes him seem positively polite on the third verse, so those sensitive to misogynistic overtones will want to take a pass here.

With all of the things Dorrough has going for him on “Get Big,” it’s fair to say there’s a SMALL bit of sophomore slump here – not an excessive amount but certainly a noticeable one. There’s plenty of fun songs and potential crossover hits, but no one song seems to jump off the page to the degree “Ice Cream Paint Job” did. It may be that was a once in a lifetime beat courtesy of 2Much, but is it too much to ask why 2Much isn’t hurr? The album’s opening song certainly could have used his touch, as Gavin Luckett is all whistles, sound effects and eerie backdrops on “Sold Out.” It goes beyond minimalistic to underproduced, and makes lines like “I’m sick from all this money in the club, I’m ’bout to throw up” seem cornier because they’re right in your face. I know Big E was going for that T-Pain/Trey Songz/Ric Atari sound on “M.I.A.” but if you can’t make it fresh don’t copy people who do it better than you. Todd Hamburger’s “Trouble” would suit Cee Lo Green better, but at least it’s a better sound than Da New Kid (I shit you not that’s his name) on “Get ‘Em Live” featuring Jim Jones.

2 Much finally shows up on the next to last track “Si Si I Like” and by then it’s 2 Late. Don’t misunderstand, “Get Big” is not a terrible album, but those who thought Dorrough had talent and were looking for artistic growth lyrically and musically will find that on this release his growth has been inexplicably stunted.