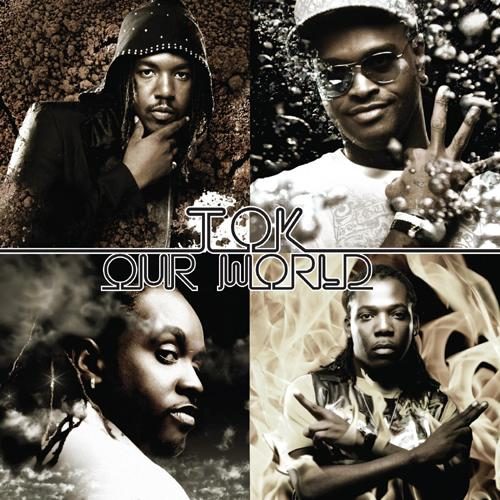 Hailed by The New York Times as “the world’s greatest dancehall-reggae boy band,” T.O.K. (originally standing for Touch of Klass), comprised of Alex, Lexx, Bay-C, and Craigy-T., has established quite a legacy. Hailing from Kingston and churning out dancehall hits in Jamaica since the mid-Nineties and in the U.S. since 2001, the group has shown nearly unprecedented longevity for a “boy band.” T.O.K. thus has a lot to live up to. Their latest release, “Our World,” however, while consistently catchy, does not live up to this Kingston quartet’s legacy. Though the production is dynamic enough to get even two-left-footed wallflowers like myself to the dance floor, the often outmoded lyrical content prevents “Our World” from being little more than a collection of half-decent club anthems.

Depending on one’s interests, lyrical criticism of the release may seem irrelevant. The club scene will likely appreciate “Our World” for the beats alone, which are as catchy as they are varied. The production on tracks such as “World is Mine” integrates time-honored dancehall-reggae riddims with electronica-inspired Neptunes-esque hooks. “It’s Over” employs a bouncy synth and intermittent call-to-arms trumpet blast, supplemented by a rolling snare and hard-hitting steady kick. A zombie would break from its brain-thirsty lumber to dance to these tracks. Others, like “Couple,” evoke a more purely traditional style, demonstrating the wide array of the group’s musical influences.

The production of the album’s slower songs is a bit more hit and miss. When the music is primarily reggae-inspired, it tends to work well. On “Guardian Angel,” for example, producer Arif “Supacoop” Cooper hits his mark by letting a ska-reggae rhythm take center stage and supplementing this riff with subtle jazz guitar. On other tracks, however, such as “Die for You” producer Craig “Leftside” Parkes, using a dated slow jam formula, sounds like he is trying to imitate Shai (remember: “Freak me, baby. Aw yeah”? anyone?) imitating the Neville Brothers.

T.O.K.’s vocal stylings are similarly varied, with often impressive results. R&B, reggae, and hip-hop influences all shine through. Demonstrating a dynamic internal eclecticism, this boy band is able to change tempos and styles at the drop of a hat. Take “I Wanna Love You,” which begins with a laid-back roots reggae-inspired first verse before transitioning into a highly catchy pop R&B chorus and then into more hip-hop and ragga-influenced second and third verses. Again, however, the compulsion to revert to dated early Nineties whiney R&B-style choruses at times gets in way. Even the aforementioned “I Wanna Love You” ends with a moaning bridge on which  these talented vocalists make use of a style which I thought went out of vogue with H-Town (remember: “Somebody’s knockin’, knockin’ da boots”? anyone?). Still, while sections of some songs may sound too much like middle school slow dance anthems, their ability to sing and flow in different styles within any given song should not disappoint.

Lyrically, however, “Our World” leaves much to be desired. Again, to clubbers, this criticism may seem beside the point. Afterall, it’s near-impossible to hear the words of a song from a crowded dance floor. In light of this, it is not surprising that these dancehall veterans are at their lyrical best when they are simply enjoying the party they can so effectively create. On “Afternoon Pornstar,” they playfully sing “every girl wants to be an afternoon pornstar/and wake up normal in the morning,” which will not only get party-goers singing along, but also evoke a chuckle from the casual listener. “Me and My Dawgs” tries to be no more than the knock-down-drag-out club anthem it is and will serve as an effective rallying cry for any group of guys ready to hit the town. Still, even on their explicit club tracks, Touch of has a tendency to get in their own way lyrically. The chorus on “Gimmie Little” which consists of the group singing “Give me some punani, -nani, -nani, -nani” feels like they are trying much too hard, kind of like when my 60 year old father says things are “the bomb.” Lines this bad may actually distract even inebriated clubbers from busting their moves. “Gyrate” is unimaginative attempt at an already tired concept, as girls are instructed to move their bodies “like a hula-hoop,” which is a short step away from telling girls to move their bodies “like they’re dancing.”

Things only get worse when quartet moves on to more in-depth topics. While “Miss World” is charmingly sincere, the other love songs on the album tend to sound recycled. The attempts at progressive social and political commentary fall far flatter. On “Intro: Our World” the group seems to think they are singing a song about world unity by aimlessly listing different places around the world that rhyme. Making matters worse, after this apparent unity-anthem, T.O.K. proclaims that they are “taking over like the Jews and the Italians,” perpetuating the exact type of stereotypes they attempt to protest on “Intro: Our World.” The album’s closer, “Live It Up,” plays like a poor man’s “Thug Mansion” and includes painfully clichÃ©d regurgitations like “I pray for the day we’ll love” and “I know someday we’ll find the meaning of life.” These tracks are an unfortunate contrast to “Footprints,” the group’s 2005 hit, a tender tribute to Alex’s brother after his senseless murder.

T.O.K. thus obviously has the potential to transcend genre both lyrically and musically. While “Our World” largely squanders this potential lyrically, if you’re just looking to dance away the work week, you will have few complaints about “the world’s greatest dancehall boy band’s” latest release.