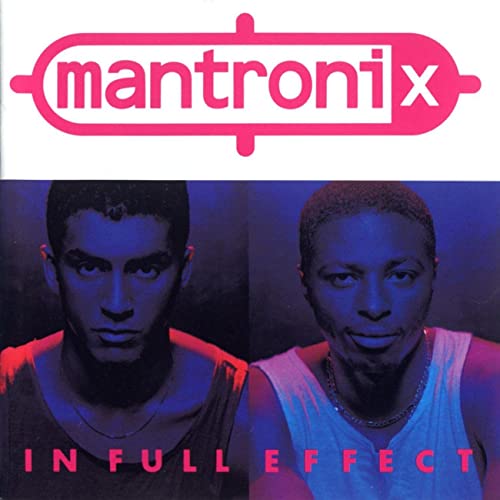 “In Full Effect” was the last Mantronix album featuring the original lineup of DJ Kurtis Mantronik (Kurtis el Khaleel) and MC Tee (Touré Embden). Released in 1988 on Capitol Records, the album reached as high as No. 18 on the Billboard R&B Charts before quietly fading away. Only one single from the album matched its performance or had a supporting music video — that song would be “Simple Simon (You Gotta Regard).”

If you’re asking “Why devote the effort to talking about Mantronix then?” I completely understand… but you’re wrong. Although their sound was fairly dated by the late 80’s, Mantronix was a pioneering rap group in terms of their sound and production. Starting with “Fresh Is the Word” on Sleeping Bag Records a few years earlier, the duo created a sound famous for its hard hitting drums and futuristic styles. Even though they were a rap act, Mantronik’s production led to them being described as everything from “house” to “techno-funk.” Songs like “Gangster Boogie” definitely tended more toward the house side of the equation, sounding tailor made for people to get up and hit the dance floor.

Other tracks like “Get Stupid, Part III” are much harder to categorize. The combination of bass and beatboxing is mesmerizing, and Mantronik is definitely scratching and throwing in samples, but there’s nothing of a “rap” here whatsoever. You might think that would make it a bad rap song, but it reminds me of “Live at Union Square” by DJ Jazzy Jeff & The Fresh Prince in its ability to be simultaneously raw AND polished. I quite like it.

The “Mega Mix” at the end of “In Full Effect” has been described as one of the best examples of a deejay/producer splicing together multiple tracks in a completely seamless fashion. Even though it’s cliche to call Mantronix “influential” you can’t help but listen to it and think about 33 years of hip-hop turntablists who heard what Kurtis Mantronik did and aspired to similar levels of cutting, mixing, sampling and beat juggling, It’s DOPE.

Now for the bad news. First of all, MC Tee is far from a great rapper. There’s a reason Mantronix is named after Kurtis Mantronik — he’s the heart and soul of the operation. You can plug any rapper into the group and create the same sound, and that’s exactly what he did after this album. Secondly, and I really hate having to bring this up but it’s an established fact, MC Tee is a registered sex offender. The charges came well over a decade after the two had parted ways, so Kurtis is in no way to blame for his friend’s actions, but it’s not something Tee should ever be given a free pass on either. It’s for the best that he’s now a minor figure in the grand scheme of hip-hop.

“In Full Effect” is an album that’s both ahead of the times in terms of its production (reportedly the first rap album ever masted on DAT instead of reel to reel) and behind the times in its sound (rappers were rapidly leaving the house disco era behind in favor of gangster rap and Afrocentrism). It’s out of time in its own time which is a compliment to Kurtis Mantronik and a warning to the listener. The record sounds dated now but the production is still impeccably precise and the beats are as crisp today as they were in ’88. You don’t have to listen to it (and you certainly don’t have to laud any praise on MC Tee) but it’s 38 minutes that ideally capture a brief moment in time.