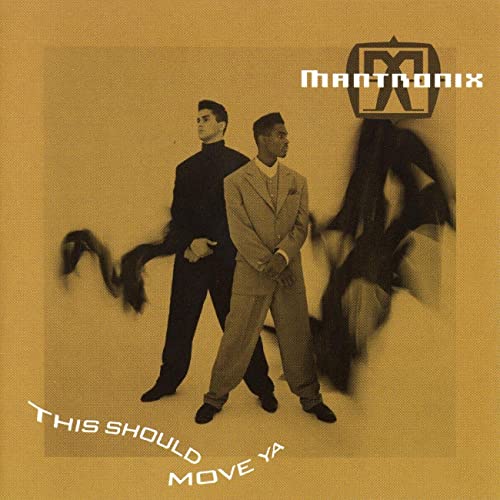 This Should Move Ya

Mantronix :: This Should Move Ya

A little bit of background before we get started. The last time I looked at Mantronix on “In Full Effect” the group was on the precipice of major change. With their follow up album “This Should Move Ya” that change has finally arrived. MC Tee is no longer a part of the group, and with his departure came the arrival of new members Bryce “Luvah” Wilson and D.J. D, the latter of whom is not coincidentally a cousin of Mantronix founder Kurtis Mantronik (Graham Kurtis el Khaleel). On their prior release I opined the following words: “There’s a reason Mantronix is named after Kurtis Mantronik — he’s the heart and soul of the operation. You can plug any rapper into the group and create the same sound.” We’re about to put the voracity of those words to the test.

Two singles charted from this album, the most successful of which was the dancefloor anthem “Got to Have Your Love” featuring Wondress. It reached No. 4 on the UK Singles Chart and No. 6 on Billboard’s Dance Chart in the United States. In the “Hot 100” for Billboard it fared much more poorly, never rising above No. 82. That’s more than can be said for the follow up single “Take Your Time” (also featuring Wondress), which reached a modestly successful No. 15 on the dance charts but didn’t crack the “Hot 100” at all. In the United Kingdom it stalled at No. 10 and rose no further.

I’m going to be simultaneously polite and rude in my estimation of these two songs. Mr. Kurtis proved his mastery of the predominant club sound with these two tracks, either of which could have comfortably featured En Vogue or Bel Biv DeVoe. That unfortunately is also what undermines the songs as being smash hits — they’re so good at fitting in that they don’t stand out, and Wondress is not a stellar enough singer to elevate either one. For those who know Kurtis Mantronix for his pioneering production work dating back to the mid 1980’s, it’s a shame to see he’s no longer the cutting edge of sound on “This Should Move Ya.” If you want some textbook Teddy Riley style new jack swing though, “I Like the Way” certainly fits the bill.

The only song that catches my ear as being different from Mantronix’ contemporaries in 1990 is “Stone Cold Roach.” The ferocity of the bars would have kept it from radio play (not to mention a few choice curse words), but the piano stabs on the chorus are FRESH (pun intended). They drop out for the actual verses though, allowing the crunchy percussion and interesting instrumentation to rise to the top. The echoing and effects are really wild on this track. I could genuinely recommend the entire album for this one song alone.

Unfortunately most of the time even the things the album does right tend to be revisit past successes — “Get Stupid, Part IV” and “King of the Beats” are just Kurtis showing off how slick he is on the mix. The latter is far too short at only 106 seconds long, just getting you into the uptempo beats when the rug is unceremoniously pulled out from under your feet.

It’s ironic that the album closes on a song titled “Don’t You Want More?”

Yes… and no. I don’t want more of “Don’t You Want More.” It’s the kind of club song that would have suited Snap! perfectly, but it’s pulling Mr. Kurtis even further away from the rap sound that I crave. I’ve seen this album classified as both “dance music” and “rap music” online and it certainly tries to keep one foot in both waters. I’m afraid that’s going to leave someone unsatisfied either way though, and I’m reluctantly one of those people. The production skills of Kurtis Mantronix are superb no matter what kind of song he makes, but on “This Should Move Ya” he simply creates rather than innovates, and I’m not sure MC Tee’s presence would’ve made a difference.

Mantronix :: This Should Move Ya
6Overall Score
Music7
Lyrics5