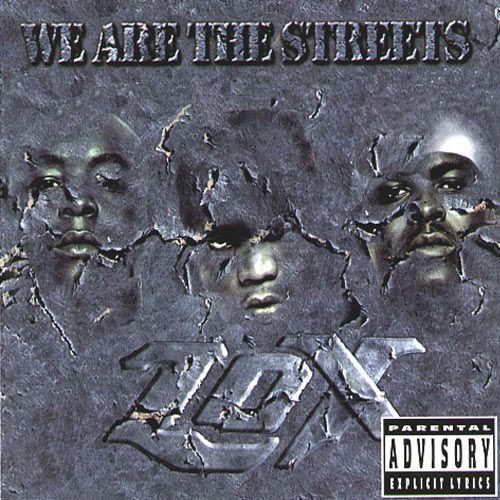 The LOX :: We Are the Streets

In 1998, the Yonkers trio of Jadakiss, Styles P, and Sheek Louch…collectively known as The LOX released their debut album. With many high profile appearances, including the tribute song to The Notorious B.I.G., “We’ll Always Love Big Poppa”, and the machine that was Bay Boy Entertainment behind them, “Money, Power & Respect” managed to land at #3 on the Billboard 200 chart and achieved gold status within months of its release. By 1999, the album had gone platinum, but it was a bittersweet accomplishment. Displeased with the identity clash between themselves and Bad Boy’s typical claim to fame, The LOX sought a release from their contract. The group even resorted to a grass roots “Free The LOX” campaign, culminating with a move to the Ruff Ryder/Interscope imprint and the release of their sophomore effort, “We Are the Streets” in January 2000.

“Streets” opens with a skit consisting of street interviews with various people, all expressing malcontent for The LOX and their brand of music. This goes on for about a minute or so longer than it really needs to, but the variety of interviewees makes for an entertaining listen. The rebuttal to the comments comes in the form of the Swizz Beatz produced, “Fuck You”, which aims to cover all the doubters and naysayers in one fell swoop, as Jadakiss raps:

“Yo, everybody’s a snake
That’s why I try to keep the grass cut
So I can see ’em when they coming
Then I heat they ass up
Cuz’ them niggaz that you went to school with
Will catch you while you in your new whip
And turn your brains into Cool Whip
Niggaz that you running round getting ass with
Ain’t gon’ help you do nothing but carry a casket
Got the nerve to ask Kiss why I smoke so much
And how I’m such a young nigga that seem to know so much
While you was running round pumping for niggaz
I was listening
And you still pumping for niggaz
I’m coming through visiting
You heard, L-O-X came through in a yellow Lex
And hop out with the Air Force One’s with yellow checks
And you liable to see me Dolo, icing the Rolo
Burner under the Polo, alot of y’all is homos
Funny style niggaz never down with me
Type that go to the bathroom, sit down and pee
I’ll empty your house, back of your cribs, smacking your kids
Bullets going through your leather, cracking your ribs
Don’t even hit me on the hip if I ain’t give you a code
And I ain’t got a home phone number, I live on the road”

Kasino lends a verse on the Swizzy produced, “Can I Live”. In fact, Swizz Beats handles over 75% of the production on the album. However, at times other beatmakers such as DJ Premier, Timbaland, and PK also spend some time behind the boards. The first PK production on the album is “Breathe Easy”. The LOX continue the tradition that began on their debut album of having each member do at least one solo song. Styles P’s joint, “Felony Niggas” is up first. The album’s first single was the celebratory “Wild Out”, which was certainly a departure from the debacle that was “If You Think I’m Jiggy”. Vintage Swizz production makes the track one of the album’s standouts and the lyrics just add icing to the cake as Sheek raps:

“I know niggas in the clink
That send pipe bombs thru sinks
That got dough and still wanna stick y’all wit minks
Y’all would think y’all was jinxed wit a month of bad luck
I’m that huntin muthafucka and guess who da duck
I’m Elmer and you Daffy like the Looney cartoon
But this ain’t no cartoon
My bullets clear out the room
I said “Boy, try to learn the fundamentals here, son.”
Like that rooster and that chicken hawk I’ll teach you ’bout a gun
I place my money on one
I’ll pull it out, you’ll run
I wave it in front of ya son and both y’all is done… Blah!
For God’s sakes, what a nigga gotta do to make a half a million
Must I wave it at yo’ children?
Run up in yo’ buildin’ and go straight for the bank
Got the coke saran-wrapped at the bottom of the tank
I know those tricks
Ya suppliers, Papi and them, I know those dicks
Give me those bricks
Now, wild out niggas”

The Jadakiss solo song, “Blood Pressure” and “Recognize” follow up. As soon as the latter song starts, most listeners will instantly identify it as a Premier production. His style is a refreshing change of pace for the album as Swizzy’s production can become a little repetitive at times. The way in which the cats from Yonkers flow with ease over the track makes me wish that Premo would’ve been able to contribute a bit more to the album. The “Rape’n U Records” skit is undoubtedly a reflection of how The LOX felt about their situation with Bad Boy. Eve, the first lady of Ruff Ryders, makes appearances on “U Told Me” and “Ryde Or Die, Bitch”. The latter left an indelible mark on the world, as the phrase became embedded in the lexicon of popular urban culture and is still in heavy usage today. The trademark Timbaland sound coupled with relentless rhymes about what type of women The LOX adore seem to go hand in hand as Styles raps:

“I need a chick that ryde or die, pullin’ the 5
Gettin’ high with the Gucci frames over her eyes
Sweet to the ‘tel, still won’t fuck in the Benz
Cause she bought me a Polo coat and a couple of Timbs’
Doobie was wrapped, both in the movie with gats
Gave me head cause the movie was wack, word”

Although names are not used, it is safe to say that the Sheek Louch solo joint, “Bring It On” is mostly about the group’s defection from Bad Boy Entertainment. Drag-On, Eve, and Swizz Beatz join in on the posse cut, “If You Know”. The album closes out with the title track and it almost seems like musical therapy for the trio as they air out all of their frustrations of the Bad Boy situation over the Swizz Beatz track:

Jadakiss: “Just better rhymes and better beats involved
Less politics, more of the streets involved
Things always go smooth when the heats involved
Sign today or get beat tomorrow
First one talkin’ that family shit
And get a lotta dough and don’t give the family shit
I don’t care how many checks you wrote
I just wanna see how you gonna dance when your neck get broke”

Styles: “Yo if you let the P call it, I don’t feel yo ass
I wish duke was still alive and they killed yo ass
You can keep an industry but don’t you come to the hood
I got a thousand niggas like me and they feel like Suge
If you think I’m beefin’ for nuttin’, you robbed me dawg
I’m from the hood
And I ain’t been robbed before
Tell you screw all the paper work
You can lie in dirt”

This was a pivotal release for The LOX. They wanted to prove that they had an even harder edge to their music and that the defection from the home of the shiny suit wasn’t in vain. I believe this album was able to do that. It also set the stage for each of the members to go on and embark upon solo careers. Jada, Sheek, and Styles have all released at least three solo albums. In fact, Sheek has released four. By far, Jadakiss has had the most success, but all three have cult followings. For many years, The LOX were at odds with Diddy about the rights to their publishing. They finally got those rights back and there have even been talks of The LOX returning to Bad Boy to release their next album. If it does happen, I hope that it is on their own terms and that they don’t abandon the place where they will always get the most love… the streets.

The LOX :: We Are the Streets
7.5Overall Score
Music7
Lyrics8