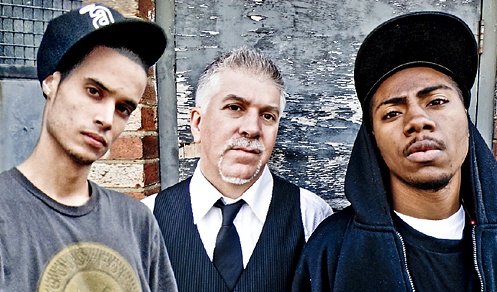 In 1993 Us3 hit listeners with their landmark single “Cantaloop (Flip Fantasia).” The song resonated with everyone who heard it and to this day is still considered a classic, genre-defining, track. Geoff Wilkinson, who is the mastermind behind Us3, has produced half a dozen albums since the group’s hand on the torch debut, which featured the aforementioned single that had everybody singing “biddy biddy bop,” and Us3’s latest effort, stop. think. run

, is in the same vein as that initial release. “I may be completely idealistic,” he says of his goals for the project, which will be released later this month, “(but) I dream about people finding it because of the artistic endeavors on there.” This week RapReviews found stop. think. run and caught up with Wilkinson to find out more about it. During our conversation Wilkinson also revealed his feelings, in hindsight, regarding his previous working relationship with Blue Note Records, and his thoughts on the rapid rise and fall of jazz infused Hip-Hop.

Adam Bernard: Start things off by telling everyone about stop. think. run

and the new lineup you have for Us3.
Geoff Wilkinson: This is the seventh Us3 album. I know people in the States might be surprised by that because I’ve kind of been out of the loop there for a while. It’s the fourth one I’ve released independently myself. It’s probably the most Hip-Hop album I’ve done in a while and features the two youngest rappers I’ve had since hand on the torch. The two rappers are Sene (pronounced Seen) and Brook Yung (pictured L to R w/ Wilkinson in-between). They’re both Brooklyn boys, although Sene’s been relocated in LA for a while now. Brook’s probably best known for being a spoken word artist. He was with a crew called Urban Word who were constantly touring around the States doing spoken word stuff.

AB: How’d you end up linking up with them?
GW: I actually found them both on MySpace. That’s kind of liberalized the ability to find independent, unsigned artists now. In the past I’d developed a network of people, mainly in New York, to find new vocalists and relied on ringing up people and asking who was hot and just putting the word out. That’s how I traditionally found people, but I found these two guys on my own just sniffing through MySpace.

AB: What do you normally look for in an emcee?
GW: Really there are only two things I look for when I’m looking for rappers, one is their flow and the other is their lyrics, obviously. I think both Sene and Brook definitely have both in abundance. I was explaining the backing track to “Who Got Next?” on the new album to Sene, which is a four bar pattern, the first three bars are in four-four, but the fourth bar is in three-four, so there’s a little trip at the end of every four bars, and when he heard the track he just snapped into it straight away.

AB: That’s a nice bit of evidence that it does help to know music if you’re gonna be a rapper.
GW: Of course, but then a lot of rappers say that Hip-Hop is a science and it’s a rhythmical art form, but if it’s a rhythmical art form then why do most rappers rap on the most basic beats in the same time signature all the time? Why don’t they actually try and do something different over something different rhythmically, like say a bossa nova rhythm, or something in a different time signature? Isn’t that more interesting? Isn’t it more of a challenge for them?

AB: I think while rappers may say it’s a science, not a lot of people want to open science books.
GW:{*laughs*}Right, OK, maybe that’s it!

AB: Us3 started as the only Hip-Hop act with access to the Blue Note library.
GW: Yeah, that was an unusual thing. You know they say if you don’t ask you don’t get and I asked them for it and to my surprise they agreed.

AB: How was that experience? What kind of archives did you get to go through?
GW: I did two albums when I was signed to them. I think they would have probably been happy with me just sampling a Blue Note’s greatest hits kind of thing, but I didn’t really want to do that. After the first album I thought if I did that again it would just be digging a hole for myself and I wanted to expand a bit. The stuff that I sampled on the second album (Broadway & 52nd), using Blue Note as a sampling resource, I tried to delve a bit further back into their back catalogue for the resource material, but ultimately I don’t think that’s what they really wanted me to do. It was a bit of a marketing exercise for them, I must admit. I did get offended by people who said that to me at the start, but looking back on it now, and looking at what they’ve done since with other artists like Madlib and other remix projects, I’ve got mixed feelings about them as a label.

AB: So for them it was more of a way to market and for you it was more of a “holy crap, I get to crate dig through this amazing catalogue!”
GW: That’s putting it in a bit of a nutshell, yeah. {*laughs*} I think that they obviously didn’t realize that it was gonna be such a big thing, nobody did, really, and they’ve obviously tried to replicate that since then with other people.

AB: “Cantaloop” will always be a huge song and the song that the masses feel is synonymous with Us3. How do you think can you work that into getting those same people interested in stop. think. run

?
GW: That’s the million dollar question, really. The answer is I don’t know. I have to wake the American public up again and say hey, I’m still out here doing quality stuff, still mixing it up with the jazz and Hip-Hop, but not using samples anymore. I think the new album’s really varied, but I also think that hand on the torch was a really varied album, as well. There wasn’t anything else on the album that sounded like “Cantaloop” and it’s pretty hard to pick something from the new album that represents it as the whole album. I like to make albums that are quite varied within themselves. I just think if people are open minded, and the people who got hand on the torch and listened to it and were into it must have been fairly open minded people in the first place, it’s just a matter of trying to reach out to some of those people to say hey, I’m still here. “The musicality [went] out of Hip-Hop a few years ago, it had become really stripped down.”

AB: Hip-Hop and jazz being put together was really big in the early to mid 90’s. Why do you think it’s not around as much anymore? We have a scene filled with some really simplistic stuff right now. What happened to the musicality in Hip-Hop?
GW: That’s a good question. I hope it’s gonna come back. The musicality had gone out of Hip-Hop a few years ago, probably at the height of the crunk kind of stuff, it had become really stripped down. But then you could argue that it had gone back to a stripped down thing which is how it started with things like Run-DMC. Everything goes in waves, really. Back in ’93 there was a Hip-Hop jazz night at the Montreux Jazz Festival (in Switzerland), which is one of the biggest jazz festivals, and performing on that night was Us3, Digable Planets, Guru’s Jazzmatazz and Greg Osby, who was doing the Hip-Hop thing at the time, as well, and we were all kind of being lumped in by the media as being the same kind of thing, but everyone sounded completely different from each other and that was really interesting to me because there was such a wide ranging difference. I think the media kind of killed the whole Acid Jazz thing to where Acid Jazz quickly became a dirty word, or a dirty phrase, before the actual music had any chance to really develop. It went out of fashion quicker than it came in, which maybe stifled some people’s development because they wanted to jump off the bandwagon. It was never a bandwagon to me, it was just a way of life, that’s what I do, that’s what I believe in and I still think that there are endless ways to put together the two types of music. There are so many different styles of jazz and so many different styles of Hip-Hop now that the possibilities of putting them together in different ways is endless.

AB: What are some of the interesting ways that you put them together on stop. think. run

?
GW: I did “You Already Know,” which is a track that’s kind of like a beatbox track. I actually sampled every, well, I’m not using samples anymore, I’m not using any recognizable things, but I sampled every known beatboxer to man on there, but just individual hits and individual pops and snare noises, kick noises and hi-hat noises from people like Rahzel and The Fat Boys. I partly do this for my own amusement because I know that nobody’s gonna actually recognize individual noises on something, but there’s a kind of history of Hip-Hop within that track to me and when I was explaining what I did to Brook before he rapped on it he was really into the idea of that, as well. I’ve also done things before where I’ve sampled an Art Blakey kick drum, a Tony Williams snare and an Elvin Jones hi-hat and programmed a beat with that. It’s actually got my three favorite drummers on it, but no one would ever know apart from me.

AB: That’s awesome. You have your own personal inside stories whenever you listen to those songs. Now, I know our time is just about up, but is there anything else you’d like to add before we go?
GW: We haven’t played live in America since 1997 because the exchange rate has been so bad. The pound has been strong and it’s financially caused a problem for me to come over, but I would love to bring the band over because we’ve been doing a lot of gigs, we’ve done something like 30 gigs this year and played in about 12 or 13 different countries in Europe, but because we haven’t been to the States in so long promoters and booking agents are a bit nervous because we’ve been out of the loop for a while.

AB: No pun intended.
GW: Yeah. If there are any adventurous promoters reading this, please get in touch because I would love to bring the band over to America again.