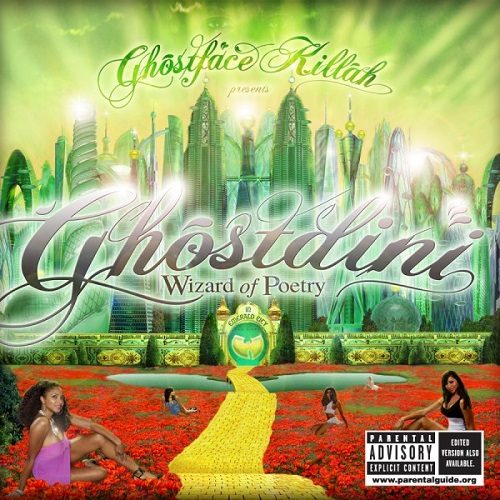 Ghostface Killah :: Ghostdini: The Wizard of Poetry in the Emerald City

The first impression I received of Ghostface Killah’s “Ghostdini: The Wizard of Poetry in the Emerald City” was when I peeped the cover art. What popped into my head was that Tony Stark might have finally fallen victim to Scarface’s old adage about “not getting high on your own supply.” But Ghost’s lyrical drug of choice is coke, and the Wizard of Oz and strippers inspired cover art for “Ghostdini” seemed like someone designed it on an acid trip. Yet the cover in question is a fitting opening image for fans wondering what they’re going to get with Ghost’s latest. Gone is the grimy street imagery and staged coke deals of past albums, and in its place is a magical wonderland of the kind of fucked up music Ghostface Killah thinks counts as a romantic album. At its most graphic this is R&B for the hardest of hardcore rap fans, capable of making 2 Live Crew join a Feminist Rally. However when Ghost puts his love of classic soul into his songs and eschews smut stereotypes he almost creates something you could play around your lady. Almost.

The first single, if you could imagine it ever getting any radio play, is the deeply pornographic “Stapleton Sex.” The song takes place firmly in the bedroom, with Tony going full force in telling the lady he’s with all of the things he’s going to do with, to, and on her during their evening of passion. Even on a rap site one has to question if some of these lyrics are re-printable, but for all the arrogant bluster and occasional violence of his lyrical lovemaking it feels less like misogyny than a bunch of over the top dirty talk. It’s a fierce track, but where the heck will you be able to listen to it? Best keep the headphones on for this one I suppose.

Thankfully the concept of Ghostface making a R&B record isn’t totally lost here in dripping wet sex tales. “Paragraphs of Love” featuring Vaughn Anthony and Estelle is a breathtaking mash up of Face’s wheezing gruff whine and its dueting singers’ finest moments, a truly beautiful tale of love and passion. Even moments of untraditional romantic storytelling like “Guest House” shine. The track wouldn’t feel out of place on one of Ghost’s normal records, but its brilliantly placed Fabolous guest spot and jealous rage narrative take the rapper’s normal blood thirsty rage and focus it instead through the prism of how matters of the heart can mess with emotional men’s minds. Few tracks give insight into the kind of man Ghost is quite like this one. Sure he’s a playboy who feels fine lining up girls for a train, but he turns to murderous fantasies at the thought of his lady in another man’s arm. Earlier in the record however he lets us know those fantasies are merely that, and when occurs to Ghost that he’s has been played his soul is burdened by the fact. “Lonely” shows this other side Ghostface, the man who’s lost everything he loved and is left wandering the world coping with his pain.

“Someone is sleepin’ in my bed, eatin’ my food
Usin’ my soap, layin’ up in my pool
Walkin’ around in his boxers, like everything’s cool
Gassin’ my chick for the whip, droppin’ her off at school
Under my covers and changin’ my channels
Playin’ my CDs in my robes, another man’s burnin’ my candles
My cologne’s halfway gone, a fake don
My wiz fell for now she chose to park under his arm
This is my fault / I never thought I’d see this coming
From the outside buggin’ with crazy knots in my stomach
They say what goes around comes around
Now I know it now
Now I’m the fool lookin’ in while it’s goin’ down”

There is an open ulcer vulnerability to his words that make this brief flash of humanity through the fog of the rest of the album’s bravado all the more powerful. The Wu-Tang’s Iron Man has always been known as a master story teller, but when he points his pen inwards he’s able to craft one of his finest tales to date.

“Ghostdini” is fine example of Ghostface Killah’s strengths as a rapper, but it’s also a terribly top loaded release. The overwhelming quality of the first eight tracks makes the final five tracks feel like filler just to have a full length album. Granted when your track with John Legend feels like an afterthought it’s a good sign of what kind of fire you’re working with on the rest of the album. Perhaps if the record’s production didn’t feature such simply refined soul samples and grooves for Ghost to throw his bullets, smut, heart, soul, and thoughts out over Legend might have been the curator of something special. Instead his track “Let’s Stop Playing” feels like a weak Legend b-side only saved from the scrap heap by Ghost’s strong verse. But even a strong verse can’t save a weak track. It’s disappointing that a record that blows out the gate with such quality falls so short at the finish line.

Ghostface Killah is a complex character. At times he’s the love sick poet with the gun to his head, moments later he’s Peter freaking North, yet at his heart he’s always the Staten Island thug who doesn’t know how to separate his street talk from his love notes. It’s easy to see him as a misogynist, but deep down beneath the layers of bragging and his bed room version of playing the Hundreds is a man who seems to genuinely love the women he’s talking about. Whether the ladies get down to this or not is a matter of if they’re willing to look for the heart behind the hustler. Those who do will find a mostly riveting ride through Ghost’s Emerald City of love.